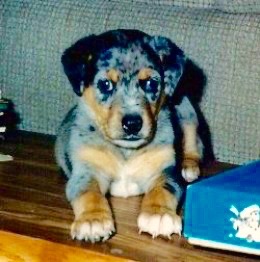 Australian shepherds take their work very seriously. At least ours all did. None so much as this little guy though. He didn’t stay little for long either. He looks pretty innocent in this shot, doesn’t he?

His registered name, courtesy of my husband, was Little Orphan Aussie, but we mostly called him Orphie. Unless we were mad. Then he was called Orphanski Orphanovich, or some such name.

We were living in the mountains at the time. Our daughter came into the house with her friend, carrying a tiny, blotchy-colored puppy with one partially blue eye. Someone had abandoned him in her friend’s yard. We told the kids he could stay until they figured out who he belonged to, but within a couple of days that went by the way side.

He was just so cute and so small. He would practically double in size when he ate! At the time we were waiting for a golden retriever pup to turn six weeks old that was a gift from a friend to our daughter, so we figured, why not have one more. As you can see in the next picture, that part worked out just fine. Orphan and Mischief (an appropriate name for the golden princess) became best buddies, and the perfect trouble making duo. 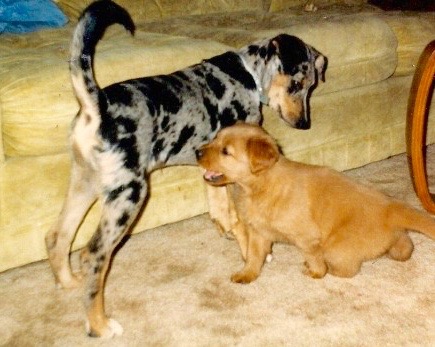 Getting Used to Big Dogs

Actually so much fun! 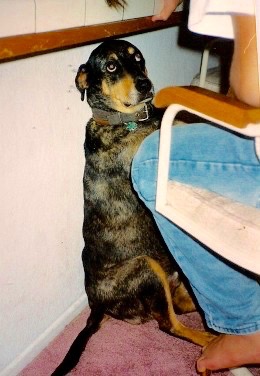 Orphan was our first big dog as well as the first Australian shepherd mix. At least that is what everyone said he was. We’d never seen anything like him. He had a tail, thankfully (it came it very handy on occasion), one blue eye that looked fairly scary to strangers, and short hair with a blue merle coat similar to a catahoula dog. He was also a new experience with the Aussie style of loyalty.

Our other two dogs were both poodles, smart, and loving, and lovable, but weighing in at about ten pounds each. But we’d never had one like Orphan. He definitely had some different and unexpected traits. He took it upon himself to protect me from uniformed men, construction workers, and all wild animals.

I’d heard stories of Aussie’s and their loyalty. Once a neighbor told me his had found a coyote in his trash can, and killed it before the man knew it was there. From what we learned, Australian shepherds instinctively will kill to protect what they are guarding, whether it be sheep or their humans pack. It is just part of what they do. Or maybe I am justifying, though I hope not! His patrols were effective. We remained critter free in those early years.

After a few years, we moved down off the mountain to North San Diego county. While there weren’t too many coyotes around, Orphan resumed patrolling his new grounds on a regular basis. He soon found new predators invading his territory. Turns out we had possums.

Shepherds do take their jobs seriously

I’m not especially fond of possums. I admit it. Nevertheless, I believe all animals deserve to live a long and happy life, unmolested. Orph, however, apparently didn’t buy into that premise. He believed that if they invaded his territory it was his sworn duty to protect us.

After he had ‘dispatched,’ (we’ll call it that–sorry) the first couple, I caught on to his ways. Usually it was easy. you could see him go on alert when he’d spot one. While we were downstairs I could stop him in time, to keep him from running outside.

Then, lying in bed one night, with Orph on the floor right beside me, I heard his breath hitch, his panting start, and he very quietly trotted from the room and down the stairs. If dogs can tiptoe, that is exactly what he did. I knew where he was headed. I ran right down after him, and out into the yard through his dog door. Sure enough, there on the top of the fence looking somewhat edgy, was a possum. There in front of him, rapidly pacing back and forth while he plotted his strategy, was Orphan. Why the possum didn’t just jump off to the other side of the fence is something for the possum psychotherapists to analyze.

By now you might be guessing why I was glad he still had his long tail. I know we’ve all grown up with the knowledge that it is wrong and painful to pull a dogs tail. I believe it and support that to this day. But Orphan had the strongest tail. Besides which it was the only part I could get a hold of. And trust me, it didn’t hurt him (though I still say, do not try this at home). He didn’t yelp. He didn’t snap. He didn’t even look back to see who had a hold of him. I was barely able to stop him from his mission of aniliation, but I was eventually victorious. That time.

Another trait to remember

The next time he was too fast for me–and just by seconds. The only positive in these sorties that Orphan carried out, is that Aussies apparently have an instinctive knack for dispatching instantly. They break the neck swiftly and apparently easily. This time he had succeeded. When I tried to get him to put it down, he ran from me. Yes, still carrying the possum.

Want to guess where? Right through his dog door and into the house. I guess I should be thankful that he didn’t lock me out, and that he stopped in the laundry room. So now it wasn’t gross enough to have a possum in the yard. Instead it was in the house. It took close to 15 minutes before I could get up the nerve to handle it (with an old blanket I never saw again after that night) and take it from him. He wasn’t growling or mad, he was simply believed it was his, not mine. Can’t you see how guilty he looks in this picture?

Eventually I managed to control him most of the time. Over the years at that house he did still manage to dispatch a few more of the poor invaders. To give Orphan his due, never once were we attacked or harmed by a single possum in all the years we lived there. He was that good at his job.

When we moved we no longer had possums to worry about. Nevertheless, Orphan did manage one more attempt to guard us. This time with a skunk. The skunk won. Need I say more? 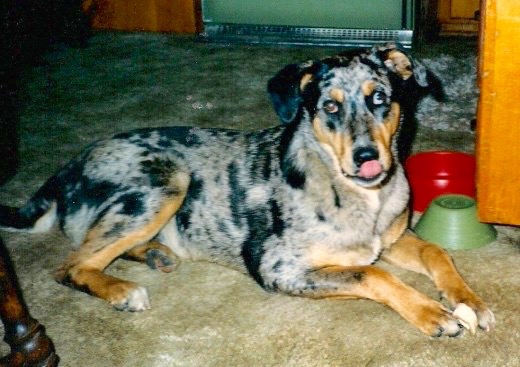 Keep Your Dog Safe and Comfortable

I recommend this harness to spread the tension on a leash across their upper body. It works great to connect to a seatbelt, but also for walks.

A “Sofa” Bed for Your Pet

After a night of hunting our Aussie would curl up contentedly in his bed, usually with our golden curled up beside him.  They loved their bed like this, with the back/arms.  One would snug a back right up to it, the other’s head would rest on it as if it was their pillow.  All in all cute and very comfy!  Unzips for machine washing, a necessity with big dogs!

First Time Aussie?  Get This!

They are a special breed.  Extremely loyal, extremely enthusiastic about working.  With training they are amazing dogs.  Without training, they may still be amazing, but their enthusiasm can be difficult to control.  Start early, and you will enjoy the dog so much more.  Really, isn’t that true of any breed of dog?

How to Raise the Perfect Dog Through Puppyhood and Beyond