Is goat milk a cure for eczema? 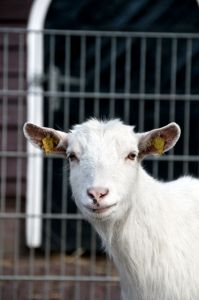 I am convinced that it is because I’ve seen a miraculous cure. Many years ago, I was amazed to see that a young man – who had the most dreadful eczema on his arms – had no trace of the ailment on his body after drinking goat milk for just one week.

Of course, I can’t say that this miracle will happen for everyone but over the years I have read hundreds of reports from people who are certain that goat milk has very much helped them fight this skin disease.

When I first suggested this cure to the young man I mentioned above – this was when I had a health food store in the UK – I had no idea that I would actually see miracle cure.

I suggested it to him because that very morning, I had read about goat milk as an effective solution in one of the wholefoods trade papers.

At first, he was very doubtful.

This wasn’t about the curing potential – he had been to many specialists and was prepared to try anything -it was about the milk itself.

He had never had goat milk but decided that it sounded horrible (I’ve no idea why) and he said that there was no way he could forego his normal cow’s milk on his morning breakfast cereal. The point is though, he didn’t have to.

There’s no need to give up regular milk

He would still have his regular milk – all he needed to do was add a pint of goat milk to his daily diet. (Although if eczema is exacerbated due to a cow’s milk allergy then it should be removed from the diet).

We easily got over the ‘taste’ problem.I suggested that he flavoured the milk with commercial mixes, or honey or spices.  We were both completely astonished when his arms were as good as new just one week into the treatment.

I had fixed him up with a one-week supply of the milk in long-life packs, similar to the product you see on the right. (If you can’t buy it locally, it’s available online).

I would never claim that this will work for everyone but it’s very much worth trying. Some people also report beneficial results from using goat milk soap.

Over the years, I’ve come across many people who have switched completely from regular milk to the goat version because it’s chock-a bloc with vitamins and, because it’s produced naturally it has none of the hormones that are injected into cows.

And do you know what? It does taste good!