Home » All entertainment » Concert for George 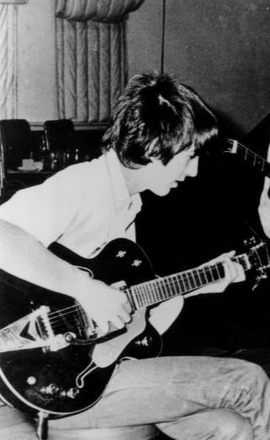 On the first anniversary of George Harrison’s death, his family and friends took part in a huge concert to celebrate his life and his music.

Hundreds of people attended the event which was held at the Royal Albert Hall in London. Millions more have seen it since. You can see the full, two hour plus video below.

The concert had been organised largely by Eric Clapton who acted as musical director and featured some of George Harrison’s closest musician friends including his fellow ex-Beatles, Ringo Starr and Paul McCartney. The concert was a wonderful way to celebrate George’s life and music and the overpowering emotion seen on stage throughout the concert was one of friendship and love.

The concert didn’t just feature Harrison’s music, it also represented other sides of him. George had largely been responsible for the introduction of Indian music to the UK and the concert began with Ravi Shankar’s daughter  Anoushka conducting his orchestra in a new Shankar composition. George’s widow Olivia lit incense on stage just before they performed. Ravi Shankar was on the stage throughout this section, Eric Clapton too and he joined the musician for the final section and at the end, Clapton and Shankar shared a hug and a joke as Olivia Harrison presented flowers to Anoushka. This typified the concert – hugs, laughter and flowers, with top musicians putting their egos aside.

George Harrison had been involved with the Monty Python movies and the next part of the concert featured the Python team and The Lumberjack Song. Then the all-star cast of musicians performed George Harrison’s most loved songs. The laughter, hugs and general camaraderie continued. George’s son Dhani, aged 24, was playing guitar on the stage during most of the numbers, looking remarkably like his late father. At one point, Paul McCartney relayed a comment Olivia had said to him:

“With Dhani on stage, it looks like George stayed young and we all got old”. 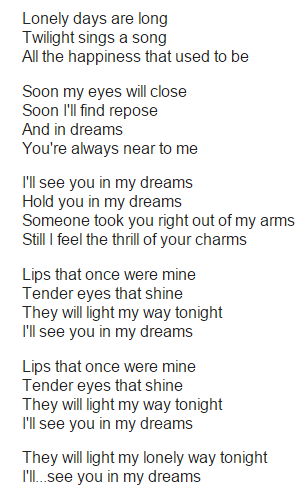 I’ll See You in My Dream lyrics

For the  finale, all the musicians were on stage but just one was performing. At Olivia Harrison’s specific request, George’s friend Joe Brown strummed his ukulele and sang the 1924 hit song I’ll See You in My Dreams as the musicians and audience clapped in time with the music.

Rose petals began to fall from the high heavens of the Albert Hall as a huge photograph of George – as a young man – was illuminated.

During the song there was a burst of applause and a huge smile from Eric Clapton as Olivia Harrison walked onto the stage and hugged her son.

It was a completely genuine celebration, affectionate and full of warmth and memories.

See the full concert below. It was in aid of The Material World Charitable Foundation which was founded by George in 1973 and is largely financed by his musical royalties.