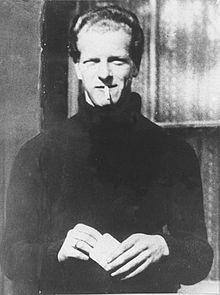 Derek Bentley was hanged in England on 28th. January, 1953. Derek, who had learning difficulties, was nineteen when he was hanged – and he was innocent of the crime.

What’s just as bad is that everyone knew he was innocent – and that included the jury who had found him guilty and the judge who sentenced him to death also knew.

This was due to the peculiarities of British law at the time.

Derek wasn’t very employable due to his low intelligence level. It’s not just me who describes him this way- he was rejected by the army for being  ‘mentally substandard’.

In other words, an official government body had deemed him of low intelligence but this wasn’t taken into account when he was sentenced to death for the murder of a policeman.

But Derek had never even touched the victim.

How did this happen?

The early nineteen fifties in Britain were still suffering greatly from the Second World War. The Allies had triumphed but a huge price had been paid.  In cities, there was unemployment and poverty and some,particularly the young, saw petty crime as the only way to improve their lot.

Some of these youngsters form into gangs, believing themselves to be as tough as the Mafia and other gangsters they saw in the black and white movies of the day. Their crimes were minor ones but some played it tough. Chris Craig was one of these. Chris was younger that Derek, only sixteen when the crime took place, but mentally he was streets ahead and liked to think of himself as a grown-up, proper gangster.

He suggested to his friend, Derek, that they burgle a confectionery factory. (Hardly a big-time heist or the crime of the century). Chris was without doubt the leader of the two and Derek went along with the plan. Chris gave him a knife and, playing the gangster, carried a pistol with some ammunition that he had been able to find. Post-war, there were plenty of guns to be had.

It was a dark evening in November when they climbed the wall of the factory and unknown to them, they were seen doing so and the police were called. The pair made it onto the roof of the factory when the police arrived. The boys hid but Craig decided to demonstrate his bravado by taunting them. Derek was soon captured by one of the officers.

Craig freed himself but was caught again and he told the officer that his partner-in-crime was carrying a gun.

Let him have it, Chris

At this point, the following shouted exchange took place:

Police officer to Craig: Let me have that gun, lad.

Bentley to Craig: Let him have it Chris.

Let Him Have It

The result was that Christopher Craig fired the gun, shooting one of the officer in the head. It killed him instantly. Chris tried to escape

by jumping off the roof. Derek Bentley made no attempt to escape. Chris injured himself during his leap, so both boys were arrested and charged with murder.

When the case came to court, the words that Derek had shouted could have been interpreted in two ways. Did Derek mean that Chris should let the policeman have the gun, as the officer had asked? Or could it be interpreted as ‘let him have a bullet’, in other words,’shoot him’?

The court decided on the latter.

Having found both the boys guilty of the murder of the policeman, then it was time for them to be sentenced.Christopher Craig, at only sixteen, was too young to be handed the death penalty so was given a prison sentence and released after ten years.

Derek though, being nineteen, was not protected by this age restriction. One could be legally hanged after the age of eighteen.

Derek Bentley was hanged on January 28th at Wandsworth Prison as a murderer.

He was finally granted  posthumous pardon in 1998. Below, you can see the statement made by Christopher Craig at the time of the pardon. 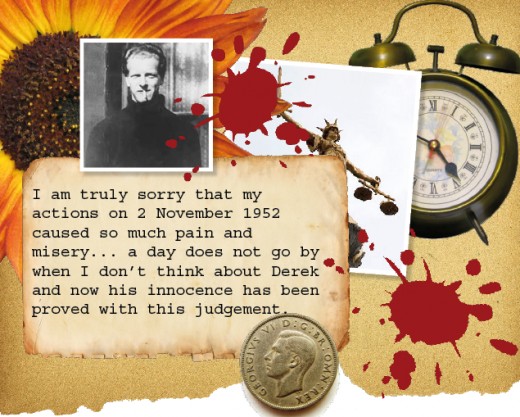 You can see more information here