When visiting a county for the first time, travelling around and feeling the essence of place what is it that remains in the memory. What stays with you as a signifier of that country. What brings back the essence of things.

In places like London it can be easy; the red phone box, the black cabs and the double-decker buses. In France it’s safe to say that it is the food – the baguette, the fromage and the bottles of wine. 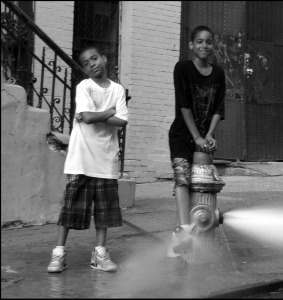 But in the USA the oldest and most iconic memories are associated with sounds; of the railways (the multi-tone Casey Jones steam whistle and crossbuck bells at railroad crossings) but the most visible icon is the red O’Brien Fire Hydrant, still a common sight on most American streets.

Patented on February 25, 1902 the familiar design was sold by the A.P. Smith company of Orange, New Jersey initially to the cities of New York and Philadelphia and then San Francisco, Toronto and host of cities and Counties. It was designed by an expat Irishman,  Denis F. O’brien, from Killorglin, County Kerry, Ireland, and soon became one of the most recognized and trusted fireplug devices in the United States.

The design of the hydrant, with that distinctive cast-iron bonnet, has barely changed in over a hundred years. That’s thanks in part to US Pipe, who bought out the hydrant division of A.P.Smith in the 60s and kept the main elements of the design. Over the years small changes were added – noteably the weathershield for the operating nut. But it’s proof of the old American truism – “If it ain’t broke, don’t fix it.” 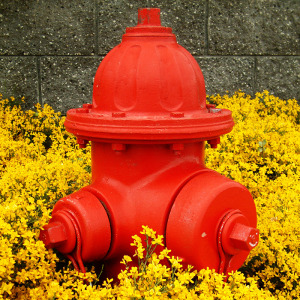 Of course the traditional color for firefighters the world over has been red, but when it comes to human safety it’s also clear that times are changing. Fact is, the color-transmitting cones in our eyes just don’t work so well in the dark.  Some colors are far easier for us to see at night – and it’s been scientifically proved that greenish-yellow colors are much more visible to the human eye under dim conditions. A study involving nine cities and 700,000 vehicle trips found that lime-yellow fire trucks were half as likely as red trucks to be involved in intersection accidents.

Given that our trusty hydrants need to be located at night, it’s no surprise that some counties and cities have been re-painting. Some are elegant and silver, others are almost glowing, with reflective yellow elements.

But the voice of tradition speaks loudly in the fire service, and quite right too.  With advances in sirens, traffic signals, reflective tape and flashing-light technology there’s no real need to plaster our trucks and hydrants in gaudy disco colors. When Santa Monica Fire Dept abandoned their yellow/green trucks and ambulances for traditional red Deputy Chief Berardinelli explained “There is an automatic association of red with fire and fire vehicles. Citizens continue to question firefighters about why their emergency vehicles are yellow.” 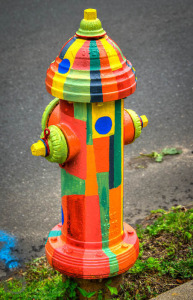 These days the color of a hydrant isn’t important – in my home town reflective blue strips are embedded into the surface of the road, so as long as the pumps work their actual color isn’t an issue. Some cites discourage the customization of the hydrants but others, like Chicago and Key West seem to actively encourage turning these much-loved and iconic objects into street art.

Every so often there’s an enterprising design team keen to bring the humble fireplug into the 21st century, but as long as they can hold the water pressure and the hoses fit, then we can be assured of their comforting presence for many years to come.