Do people treat you differently when you’re old?

Home » Health » Do people treat you differently when you’re old?

This was a question posed on a radio program I heard this morning. Isn’t it an interesting topic? (And one that becomes more interesting the older we get!)

This was a phone-in show and it was interesting to hear what callers had to say. One (young) woman told of a time when she was in a supermarket. In front of her in the queue was an elderly woman in a wheelchair. The supermarket employee who was dealing with her was surly and impatient.

When it was the young woman’s turn, the employee was cheerful,perky and helpful. The caller could only assume that this was due to the difference in their ages – or some strange prejudice against older people. 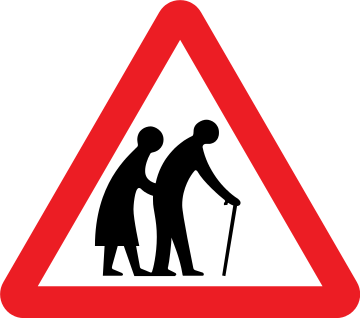 Incidentally, several callers mentioned that they truly disliked the description ‘elderly’. They suggested that this suggests infirm and incapable whereas in fact that’s hardly true today, many older people are full of life, bright and entertaining.

For example, is the road sign on the left really ‘politically correct’?

It’s often seen on roads close to facilities that care for the elderly (apologies to those who dislike the word) and yes, it’s sensible to warn motorists that there might be people who are crossing the road who may be a bit slower than average.

But is this a stereotype?

Are older people seen as being hunched over and using walking stick or the support of others to get around?

Recent statistics in the United States say that 20% of pedestrian deaths and 9% of pedestrian injuries are to people over sixty five. Not enormous figures and these days, aren’t pedestrians more likely to be older people?

What mental image does the word ‘grandmother’ conjure up for you? An old lady sitting knitting in a rocking chair? Today’s grannies are more likely to be running their own businesses, writing their blogs, rushing to their yoga classes and spending much of their leisure time dressed in jeans and a t-shirt. So are many great-grandmothers.

But it wasn’t all doom and gloom from the people who called into the radio program. Many people said how much they enjoyed the freedom of being part of the older generation. As one older lady said ‘No matter what crazy things I do, I can excuse it by being an old lady’.