Who was Dodi Al Fayed?

Who was Dodi Al Fayed? 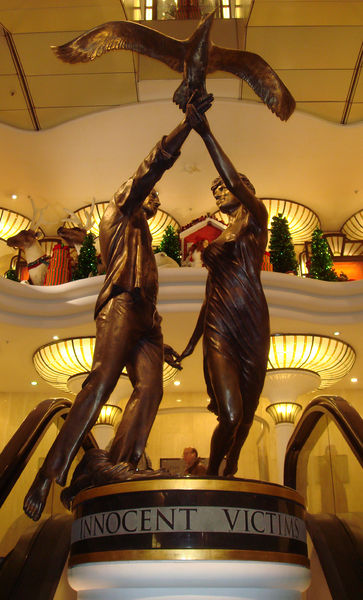 The rather tacky memorial to Diana and Dodi commissioned by Mohamed Fayed and displayed in Harrods.

In 1997 Dodi Al Fayed, aged forty two, died in a car crash in Paris. With him was his new love, Princess Diana. But how had this relationship started? Largely, it was engineered by his father, Mohamed.

Mohamed Al Fayed had been a friend of Diana’s father, Earl Spencer. Diana didn’t know him well at that time but later, when as the Princess of Wales she shopped at Harrods in London, Mohamed would be alerted to her presence and escort her. The wealthy Egyptian had bought the Harrods store in 1984.

In the nineties, every Christmas Mohamed would send a huge Harrods hamper to Kensington House where the now-divorced princess lived. When she and her sons had birthdays, he would send lavish and expensive gifts and he often invited them to go to stay with his family in the South of France. His requests were denied.

But in 1997, Diana accepted the opportunity of  private trip to the French Riviera and in consequence, the enormously wealthy Mohamed purchased  a huge and luxurious new yacht, the Jonikal.

Diana left England for France on July 11th, accompanied by her two sons and their police protection officers. They were whisked away by Mohamed’s private helicopter and first taken to one of his homes in Surrey where they had lunch with the Fayed family. A private jet then flew them all to France. Their first port of call was Nice, where they boarded the luxury yacht which was to take them to his secure and well-guarded French resort home.

Mohamed had arranged various activities for the boys and promised them speedboats, jetskis and scuba-diving trips and he had also arranged a plaything for their mother – his son, Dodi. The fact that Dodi was engaged to an American woman and had just bought a house for the two of them in Malibu appeared to be immaterial.

For five days, Diana and Dodi enjoyed each other’s company. Dodi soon broke his engagement and Diana, who had  recently ended an affair with heart surgeon Hasnat Khan, was also now footloose and fancy free.  (Her friends had said that she had wanted to marry Khan but he broke off the relationship).

Mohamed was ecstatic to see the relationship between his son and the princess develop.  Despite his ownership of the prestigious Harrods of London, he had been denied British citizenship. He had also fallen foul of the establishment during an acrimonious investigation by the Department of Trade. Seeing his son and courting the mother of the future king made him rub his hands in glee.

The two princes, William and Harry, were less happy with their holiday. Despite Mohamed’s insistence that this would be  private trip, the paparazzi were swarming round, capturing images of their bikini-clad mother in the arms of her new lover. The boys were looking forward to getting back to the reality of Balmoral after seeing their mother cavorting with the paunchy Dodi and the flashy lifestyle of the Fayed family wasn’t their style. When the princess and the princes returned to England, Dodi was calling Diana on the phone and arranging to take Diana to Paris by helicopter to dinner. THe princes were left at Kensington Palace with their nanny.

After Paris, Diana left with Dodi to cruise aboard the luxury yacht to Corsica and Sardinia. The princes were by now with their father,Prince Charles at Balmoral enjoying the moorland and hills, the rivers and lakes, spending happy days with the dogs and horses. And no paparazzi.

Less than three weeks later, on 31st August, Diana and Dodi were in the fatal Paris car crash

The information you read above is from the book you see on the right. Its author, Penny Junor,isn’t just some uninformed journalist. She is from a prominent British family herself and was educated at the same school as Princess Anne.

She has written several respected and immaculately-researched books about the royal family and is considered to be a valuable expert on the British monarchy.

The book you see here is primarily about the last thirty years of the British royal family with, as you can see, a particular leaning towards the life of Prince Harry. But it contains fascinating insights into the major players in the family, their friends and the members of the royal households. It includes an extensive look into the period of time Prince Harry spent in Afghanistan with the armed forces.