Home » All entertainment » Down With Kurt Cobain 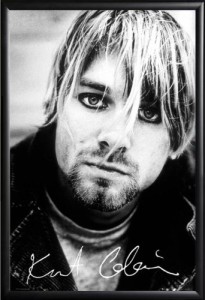 Montage of Heck, a documentary film about the rock star Kurt Cobain, begins and ends with film of an adorable little boy, aged around eighteen months old. The film’s executive producer, Kurt’s daughter Frances Bean, was around the same age when her father was found dead at his Seattle home. He’d taken his own life.

As a viewer one is left to contemplate the nature of Cobain’s life. How did this little innocent boy, waving so sweetly at the camera, grow up to be such a troubled soul. How did he grow up to channel his personal pain into art. How did his demons come to dominate and  destroy him.

The film is in many ways a throwback to that most revolutionary documentary making style, epitomised by Albert and David Maysles’ work in the 60s and 70s. Montage of Heck has a feel of the Maysles’ Grey Gardens – the one with Big Edie Bouvier and her adult daughter Little Edie in some overgrown and crumbling Hamptons mansion. This style, direct cinema, documents and ultimately challenges the relationship between the camera and reality by just letting the cameras roll. 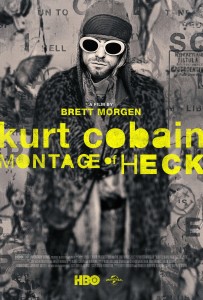 Here we’re faced with a torrent of personal ephemera, notes, tapes and home movies of the kind that, after a bereavement, would be boxed and binned never to be seen again. The intimacy of this is enhanced by some quite stunning animated sections, bringing to life some of the more incoherent elements – demos and compilation cassettes – and creates a hugely intimate portrait of a man who all-too-briefly dominated the rock music scene of the early 1990s.

That direct cinema feel is created by the director Brett Morgen. It’s intense, emotional and personal – a genuine insight into Kurt’s private life.

At times it’s deeply embarrassing and hard to watch, and in these days of reality TV following around some celebrity’s every move I’m left thinking that there’s just too much information being shared. As if we’re all rooting through his diaries and letters regardless of their eloquence or value; looking for clues, looking for gossip, looking for traces of his soul. This Gen X icon, this last real rock star, who somehow became a martyr and a messiah for a generation.

I write someone who, albeit a few years earlier, had grown up in similar modest but loving surroundings, only to split to the big city and live for the rock and roll scene. I saw plenty of the bands he did and wasted time in a good few dive bars and sweaty clubs. But I don’t think I was filmed once, and photographed only sporadically. Kurt by contrast seems to have been adored and doted upon, his life documented visually from the moment he could cry. 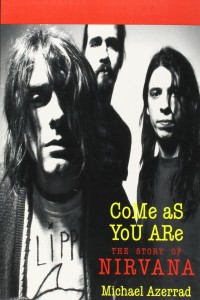 Come As You Are by Michael Azerrad. Click for more.

I went through my own share of depressive periods too, but I think I learned to use the music and the art and the noise to take my mind away from such black moods. I came to see my melancholy as a kind of vertigo – just don’t look down – to the point where I wouldn’t indulge the experience, not giving it time to grow. It’s a part of the human condition and to some extent we can all identify with Kurt’s rites of passage.

With Cobain there’s a sense that he liked to confront these moods directly, to the point where they felt like physical , uncontrollable entities. He certainly confronted those demons, those black dogs, in his music – You can hear all the aggression, anger, pain, sadness, and torture in his voice.

Some say that Kurt displayed symptoms of manic depression – Since early childhood Kurt wrote and drew all the time, with written declarations, poetry and artwork, seemingly typical of manic behavior. He self-medicated to an alarming degree, and sometimes wrote raging angry missives to people he thought had wronged him. 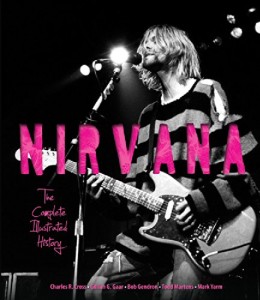 The story is a cautionary tale for sure – but it is also an inspiration. showing his unique powers as a songwriter and communicator. He dealt with all the themes of a troubled manhood, but presented them with such power and eloquence.

His widow Courtney, who seems to gatecrash the sedate documentary like a hurricane, once wrote a song called Celebrity Skin:

“Beautiful garbage, beautiful dresses
Can you stand up or will you just fall down?
You better watch out – Oh, what you wish for
It better be worth it – So much to die for.”

At the close of the movie, as the credits roll there’s a sense that daughter Frances has opened up every last book, played every last tape, and presented her tragic parents as openly and intimately as it could possibly get. The celebrity skin now bared;  it’s all in the can and up there on the big screen.

The friends and family can at last be left alone. We now know everything.