Who Was Edgar Rice Burroughs?

Home » All books » Who Was Edgar Rice Burroughs?

Who was Edgar Rice Burroughs? 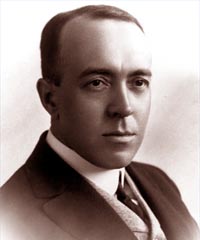 Edgar Rice Burroughs was one of the most successful American authors of the twentieth century. Although he wrote about several subjects, he will always be mainly remembered for his Tarzan series.

Burroughs was born into a wealthy Chicago family. However, he was considered the black sheep of the family.  He took to heart the advice ‘go west, young man’ and spent time working in ranches and prospecting for gold.

He was thirty five years old when he produced his first successful book, Tarzan of the Apes. His writing career spanned almost forty years, during which he wrote eighty books – twenty six of which featured Tarzan.

As many people know, Tarzan is the story of an aristocratic English baby who is left as an orphan in the African jungle. He was brought up by the apes. This meant that he had a combination of human and ape skills.

If you’ve only seen Tarzan television shows and movies, I recommend the books highly. They are lots of fun and superb period pieces. The character proved to be so popular that the TV and movie industry couldn’t resist the stories but the original books are far more interesting.

Johnny Weissmuller was the definitive movie Tarzan. He was originally a successful competitive swimmer. It’s said that the Tarzan movies earned him over $2 million.

When he retired, he moved to Fort Lauderdale, Florida. I live very close to the home he once owned – it’s right on the water, of course. He became the founding chairman of the Fort Lauderdale International Hall of Fame.

There is a wonderful story, or perhaps merely a legend, that when he set off in the morning to go to work at the International Swimming Hall of Fame, he would simply dive into the canal outside his home and swim up  the Intracoastal Waterway to work. I sincerely hope that is true 🙂