British pet-lover paid £300 for an operation for his constipated goldfish. 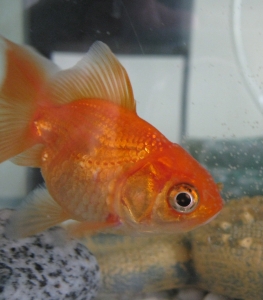 Body double – not the actual goldfish

On 1st January, 2015, a British pet-owner could no longer conceal his concern for his goldfish. He’d noticed (and this is a mystery in itself) that the unfortunate fish was having a problem in the bowel department.

Luckily, his local veterinary office, in addition to dealing with the average pet problem, specialised in  more exotic animals and their medical conditions  too. Indeed, the week before, they had castrated a skunk.

When the pet owner heard the diagnosis and realised that his goldfish would need an operation costing  £300, he declined their services. But he soon saw the error of his ways and before long, the fish was under anesthetic, complete with a minuscule heart monitor, and having microsurgery.

As you can imagine, this was a very complex procedure.

Can’t you just imagine the scene? The hushed voices. The concerned nurses mopping the dripping brow of the sturgeon … sorry, surgeon.

The surgeon said that the operation had taken nearly an hour and that she had carefully removed a lump from the fish’s nether regions. A further lump on its dorsal fin was removed as the fish’s owner, no doubt, paced the corridor mopping his own brow.

The fish though, happily, is making a full recovery. But I’m still puzzled. I’ve had goldfish. I wouldn’t go as far as to say that I know their habits though. One goldfish we had, a chubby little chap called Ftumsh (not a typo) suffered, according to my other half, from a personality disorder. I was so astounded by the pronouncement that I couldn’t even ask what on earth gave him that idea. He was probably wrong anyway.

But our fish owner above ‘noticed’ that his goldfish was constipated. And he was right. In a statement, the surgeon said that the fish would have soon died without the operation. Well, she would, wouldn’t she, for a £300 fee?

Or am I just being cynical?