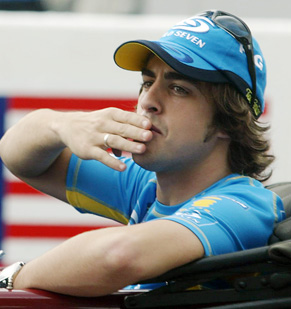 If you know me at all,then you are aware that all Formula One drivers -past, present and more than likely future – are heroes in my eyes. Although like most F1 aficionados, I will secretly admit to having particular favourites, one of which is Fernando Alonso.

That’s why I’m very puzzled by the testing accident he had in February 2015. With the season starting in just a few weeks, during the accident, he crashed into the wall at a mere 150 kilometres an hour.

If you’re not a racing fan, then 150 kph might seem fast to you but in the context of Formula One, that’s slow.

But what I don’t understand is the news that we’re getting from the media. (If you have inside information, please let me know).

On the day of the accident, some people reported, albeit on Twitter, that Fernando had passed out at the wheel and this was the cause of the accident. He was checked over in the medical centre and then sent to hospital.

News from the team said, conflictingly, that a) he had concussion b) he did not have concussion c) that he was unconscious for  a period of time and d) that he was unconscious for a mere second or two. Then they said that he would race in the 2015 inaugural race in Australia on March 15th, then said that if he didn’t, test driver Kevin Magnussen would take his place. Eh? Oh, and there were no mechanical problems with the car,they say.

To add to my confusion, Alonso was in hospital for three days in, some reports say,intensive care. Yet the team say that he has no injuries and no concussion. On discharge from hospital, he was heading home to ‘rest’ and will take no further part in testing. Do you remember that Martin Brundle crash years ago where it looked, for those of who were watching, that he could in no way survive? Yet he ran back to the pits and resumed the race in the spare car.(That wouldn’t be allowed today, of course).

So what was the truth about the Alonso accident?

Strange, isn’t it? And the contradictions that have been reported make it even odder. The team have strenuously denied that Fernando lost consciousness before the accident.

If you’ll forgive me for injecting a touch of Shakespeare here, isn’t this a case of ‘The lady doth protest too much, methinks‘?

On March 3rd,it was announced that Alonso will not take part in the Australian Grand Prix. Curiouser and curiouser. THe team says that this is on the advice of doctors who fear a further concussion.

To be updated as and when news breaks….