Formula One Books You May Not Have Read

Home » All lifestyle » Formula One Books You May Not Have Read

Now you may be an F1 fan yourself or perhaps you’re looking for a gift for someone you know who regularly talks about the ‘F1 season’, ‘winter testing’ or ‘this year’s championship’ and I bet it’s getting harder and harder to find something different.

Well maybe I can help you out. I’ve been following formula one since I was little – and I mean little. At the age Lewis Hamilton started karting I’d been following the sport for at least two years, though admittedly I was born more than a decade before him.

So I’ve seen quite a bit of the sport over the years and read a fair amount about it too. For that reason I thought I might help you out with a couple of books you might not have come across:

‘It Is What It Is’ by David Coulthard 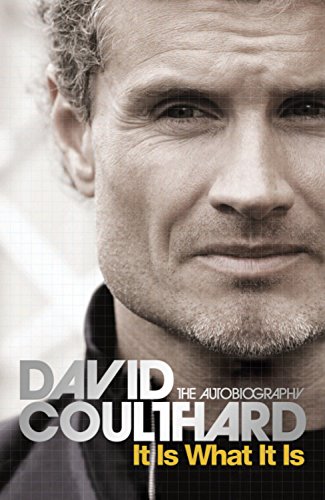 Now DC, as he’s known on the F1 circuit, is not everyone’s first choice when it comes to picking their favourite driver. Yes, he won 13 races in his (nearly) 14-year career, but he never managed to win the driver’s championship – overall his best year was 2001 where he finished second to a chap named Michael Schumacher…

But it’s since he started being a pundit and latterly a commentator as well on the BBC’s coverage of the sport, when interest in him has become much bigger. The thing is we started to see a personality in there, the real David so to speak, and he was funny, and had opinions, and would argue with Eddie Jordan, and so we were interested in the person who had been hiding in that chiselled shell.

The book is about his life up to and including his racing career and it’s really quite interesting to find out that bit more about how it all came about and what was happening in the background. But I guess I should warn you that it’s not about life after driving in F1 – however, it does give you an insight into the man, his thoughts and all that racing.

So after reading it and taking it all in, I’m so curious and want to know more – I can’t wait for the next one, I’m really hoping I don’t have to wait a long time and it’s not called ‘It was what it was’!

If you’d like a more in-depth look and review of this book you can find it here.

‘The Inside Track’ by Jake Humphrey 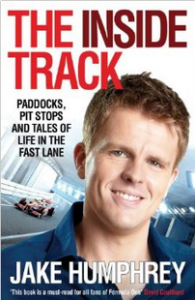 For those of you who don’t watch BBC TV for your formula one coverage, you’ve probably never heard of Jake Humphrey, but this was the frontman for the BBC’s flagship return of F1 coverage when they won it back from the competition.

Admittedly he’s not there now, Suzi Perry has that privilege, but he was part of a three-man team that drew us even further into the sport we loved, and the chemistry they had between them made us love the coverage even more.

For those of us who watch during this era, I don’t think any of us will forget the three of them wing walking their way over Silverstone in 2012, or many of their other escapades. So I was really interested to find that he’d written a book, which in the end punctuated his F1 career, when he decided for family reasons, to walk away from a sport he loved.

Being called ‘The Inside Track’ I was hoping the book would reveal some amazing facts or stories that I hadn’t come across before and it does, to some extent. For example, did you know that Pirelli have a motorhome in the paddock that takes 10 hours to build, in which they serve 25,000 meals a season and prepare 1,200 km of pasta.

However, if you’re an obsessive F1 fan (like me) you may not learn that much from this read. If you don’t know much about the background of the sport you’ll love it, but if you’ve been following it for years, it might not teach you much. What is interesting though is seeing the sport not from a driver’s or a team principle’s point of view but from someone in the media and this book also let’s you in on the relationship between Jake, DC and EJ (Eddie Jordan). The chemistry between these three has been brilliant and some of the stories are shared here, including when Eddie called Sir Paul McCartney ‘George’ on live TV!

Overall it is a good, fun, entertaining and intelligent book that put a smile on my face in places at the memories of one of the best presenting teams the BBC has ever had.