Jaco Pastorius is one of the great music teachers of all times, aside from just being an awesome musician, and a great catalyst. He’s kicked us all into gear. He’s directly responsible for any growth that’s perceptible in me. Joni Mitchell – In Her Own Words

“Music is in the air; it’s my job to pull it out.” Jaco Pastorius

Songs for Jaco - A Pastorius Playlist

Moving to Fort Lauderdale in 2000 I knew that it was Jaco’s town. I was a budding bass player myself, and had an ear for the greats, but it was increasingly clear that I would never reach their standards. Charlie Mingus to Stanley Clark to Geddy Lee. From Marcus Miller to James Jamerson. From Me’Shell to Victor Wooten. All amazing and inspiring players. 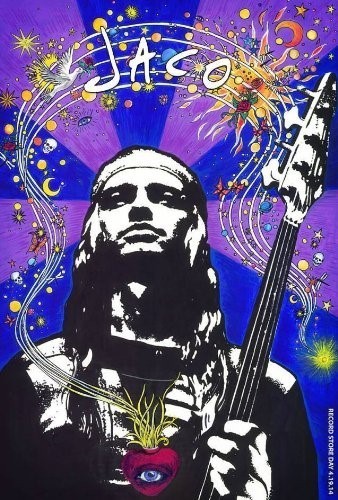 A movie produced by Metallica’s Robert Trujillo ‘JACO’ tells the story of Jaco Pastorius, a self-taught, larger-than-life musician who changed the course of modern music. Never-before-seen archive unveils the story of Jaco’s life, his music, his demise, and the lasting victory of artistic genius. Pre-order poster and movie here.

But no-one comes close to Jaco. Herbie Hancock called him a “phenomenon” while Hiram Bullock called him “a true genius on the level of Mozart”.

If there was one thing that characterized Jaco Pastorius` music, it was intensity. He played from the heart. That intensity, combined with his pioneering techniques on the electric bass, his manic finger speed and his talent for composing, earned Pastorius a reputation in the late 1970s and early `80s as the finest jazz bass player in the world. Don Melvin, Sun-Sentinel

His connection to Fort Lauderdale goes back to 1959, when his family moved here from Pennsylvania. Jaco was seven years old, son of a Jazz drummer. He was soon an altar boy at St. Clements Church is Wilton Manors and he was winning trophies in swimming, baseball and football. They say he was the best little league baseball player in South Florida.

Jaco was a Broward boy. He may not have been born here, but South Florida was always home. It’s where he grew up, where he swam toward the ocean’s far horizon, where he raised his own family, where he created the musical magic that still inspires people today. Matt Schudel Arts Writer, Sun-Sentinel. 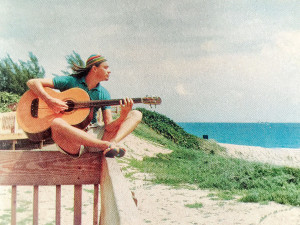 Jaco started out as a drummer too, like his pop. Aged 13 and he was already in a local band called Las Olas Brass, initially drumming, only for him to switch instruments after a football accident. Totally self-taught, from a pawn shop bass he was soon tackling an upright, then finally his signature 1960 Fender Jazz.

By 16 he was, according to Peter Graves (one of the first to really pick up on the kid’s talent – hiring him for his show band at the Bachelors III nightclub) a fully developed creative genius at sixteen. He just in time with a number of local acts; Soul Incorporated, Tommy Strand and the Upper Hand, Uncle Wig Out and the Solar System, The Uptown Funk All-Stars.

Jaco never slowed down. He was always on the manic edge, always pushing to the limit. He took me to the beach during the worst hurricanes just to feel the power. It was a totally natural reaction to his environment. – Greg Pastorius

Those Fort Lauderdale days sounded idyllic. Practicing for hours on end, meeting friends at the beach basketball courts for some intense games followed by an ocean swim to cool off. Late in the afternoon they’d lie in the sun then cruise around town in a borrowed vehicle or maybe hang out by the courts in Holiday Park. 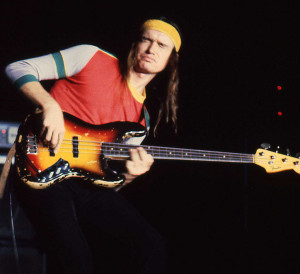 It’s a measure of how quickly Jaco picked up musically that by the age of 23 he was teaching bass for a semister as an adjunct instructor at the University of Miami.  Jaco, now a young father living in Hollywood above a laundry, moved from one band to another.

He’d tour with Wayne Cochran’s CC Riders (the inspiration for the Blues Brothers) and a few spins with the Lou Rawls band. He picked up a few gigs on the cruise lines. He joined a quartet led by Miami jazz patriarch Ira Sullivan and began a friendship with another University of Miami musical phenom, guitarist Pat Metheny.

At the age of 24 Jaco approached Weather Report’s leader and keyboardist, Joe Zawinul for a job. “He told me he was the greatest bass player in the world. I told him to get the fuck out of my sight…” Joe told GQ’s Pat Jordan.

As they say, the rest is history. Jaco’s first album came out to rave reviews and he was off on tour with Weather Report, who by now were world famous – joining Zawinul and Wayne Shorter as a distinctive third lead in this fabulous jazz fusion band. 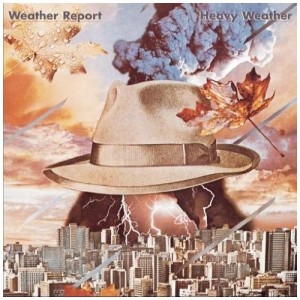 Back in Pompano Beach his first marriage had broken up and Jaco the rock star took over; with a new, inseparable second wife (they married in the ruins of a Mayan temple, in Guatemala) helping him steer through the endless touring. Trips back home were infrequent, though, and the demon drink was beginning to take hold. The famously relentless Weather Report schedule didn’t help, and of course 70s musicians were famously into cocaine and booze. Friends back home were shocked at how the previously straight-laced Jaco had so quickly succumbed to the rock star lifestyle.

“By 1980 Jaco was always angry and drunk”, Zawinul told GQ. “He began to try to out-macho me. To outdrink me. Sure, I drank and occasionally did a little blow, but I liked myself too much to hurt myself. Jaco did everything to indulgence. Then his music began to slip. It was still perfect, but it wasn’t fresh. It was like a circus act. Jaco relied on tricks he had done before.”

Jaco’s pursuit for individuality is one of his most incredible achievements in the sense that he achieved it. He made it. He found a thing that was really his and his alone. And as somebody who’s aspiring to an artistic endeavor in their life, I don’t know that you can find any measure of success that would be greater than what Jaco actually managed to manifest into sound over the course of his career. Pat Metheny – Jazz Times

By 1981 Weather Report was over. He was dividing time between Fort Lauderdale and New York, where he’d debuted his Word of Mouth big band, but the mood swings continued. To make matters worse he’d taken to leaving his famous “bass of Doom” unattended as he played basketball at the West 4th Park in Greenwich Village or slept rough in the park. 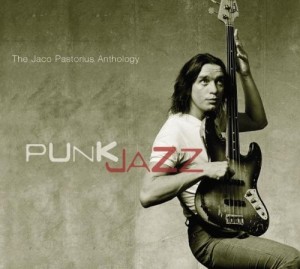 Finally at BelleVue Hospital he was diagnosed as having a hereditary bi-polar condition and given medication to control it. His brother Greg said “when Jaco had problems over his last years he used to scream at me to be quiet so he could hear the music. When it got too much for him he clapped his hands over his ears.”

There is no doubt in my mind that my father would have gotten better. It would have taken a long time for him to recover after the chemical warfare that wreaked havoc on his brain for so many years, but he didn’t even get that chance. He should have had a lifetime to heal and learn. Yes, my father kept making mistakes – everyone does. Unfortunately, if you are living in the throes of manic-depressive illness, your mistakes are going to be on a much grander scale and with far greater consequences. Mary Pastorius
(Read Mary’s moving full article here)

After a spell in BelleVue he decided to come back down to South Florida to live with his mother in Oakland Park, and for a while things went well. He was jamming locally with Randy Bernsen but things soon went bad again. After a family row he stormed off to make a nuisance of himself, a bass guitar under one arm and a basketball under the other. Often Jaco would show up at the Musicians Exchange, ragged and messy, just to play the piano a while.

His local rap sheet is tragi-comic – He’d been arrested or cautioned in those last four years for being drunk and disorderly, resisting arrest, during an argument with his second wife, stealing drinks or loose change,driving a stolen car around a running track and for riding naked on the hood of a pickup truck. 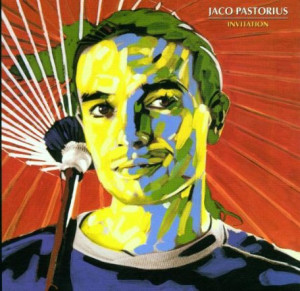 Jaco Pastorius’ Word of Mouth big band made two recordings for Warner Bros. during its short life, of which is this – Invitation- is the superior one. Click For More

In his better moments – when he wasn’t sitting drinking around a camp fire with the Holiday Park itinerants – he was working on his music and future deals. But then it all came to a sad end, in the parking lot of an after-hours club in Wilton Manors. A fracas with a doorman left him comatose intensive care. He died on September 21st without ever coming round.

But we can’t dwell on the downfall, given how much sunlight Jaco put into our music. His solos still light up the speakers.

Final words to those who knew him best:

“He was definitely a once-in-a-lifetime musician.” – Pianist Alex Darqui

“You come across a Jaco once in your life. He turned the world on its ear.” – Trombonist and bandleader Peter Graves

“He was the greatest musical talent I’ve ever seen.” Guitarist Randy Bernsen

“Jaco Pastorius was the finest musician in any genre, classical, pop or jazz, to emerge from Broward County. He was our Charlie Parker or Jimi Hendrix, maybe even our Mozart.” – Matt Schudel, Arts Writer, Sun-Sentinel

Twenty-one years after Jaco died, the city of Oakland Park honored jazz legend Jaco Pastorius with a new park and dedication. The park covers an open lawn area and a walkway just north of the intersection of Northeast 38th Street and Dixie Highway, at the south end of a triangular plot of land. Broward County provided funding for the park with the condition that it be a passive park, which means no athletic amenities or playgrounds.

Muralist Bill Savarese painted a city-approved design on two sides of a city-owned building adjacent to North Dixie Highway in Jaco Pastorius Park. The City is also planning on implementing literature to introduce Jaco into the schools early on, so children grow up knowing who their Park was named after.

It’s public art. The thing that excites me most about this project is that it can be enjoyed by many people. That is a privilege and an honor for me as an artist to be able to do that. The design for each wall was chosen in part so it would make a strong visual and emotional impact from the distance people will view the mural. Van Gogh was a visual genius, and Pastorius was a musical genius. Bill Savarese 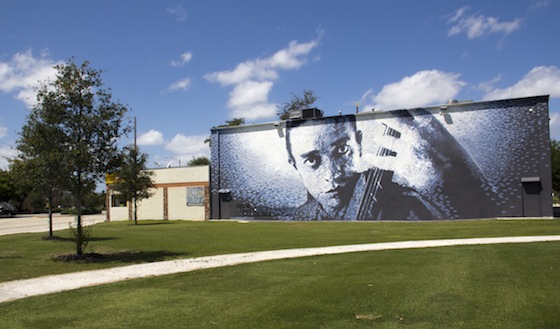