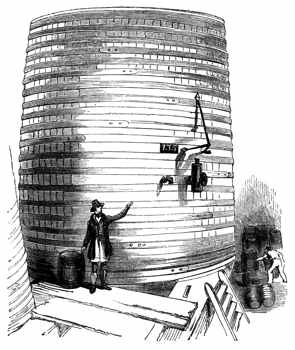 On Monday October 17, 1814, a huge vat of beer burst in the centre of London sending a tidal wave of black porter ale, 15 feet high, flooding into houses, drowning people, and demolishing property in its wake.

But in 1814 it was the location of the Horse Shoe Brewery, owned by the Meux family, (previously Stevenson’s Brewery) in what was then called Bainbridge Street (see map below). It was an over-crowded area then, with streets surrounding the brewery full of flimsy tenement houses occupied by poor Irish immigrants.

In early 19th century London, beer was drunk, particularly by manual workers, in preference to water, which was only available through communal pumps. Although ale of all type was brewed by over 100 London breweries, it was porter – dark, malty and sweet – that was the beer of preference for most, as it satisfied the thirst, was fairly mild in alcohol and cheap to buy. Nearly two million gallons a year of porter alone were brewed in London, and the Tottenham Court Road brewery was one of largest in the capital.

At the Meux brewery, the bulk of porter was stored in a huge wooden vat, 22 feet in height (the same as a London double-decker bus) destined to be siphoned off into barrels ready for shipment to pubs. The vat contained enough beer to fill 3,500 barrels of beer – and more than a million separate pints. 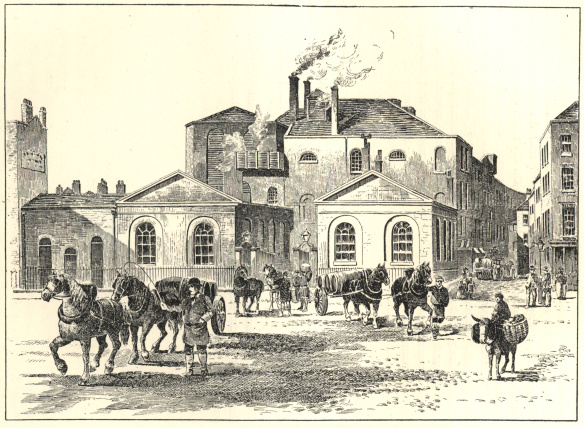 Around 4.30pm on October 17, a storehouse clerk, George Crick, noticed that one of metal hoops at the bottom of the vat had slipped. The pressure of beer on the wooden staves of the vat had caused rivets to pop and the band to loosen and fall.

Crick wrote a note to one of the brewery partners informing her of this, although he wasn’t over-alarmed at this stage, as this was a fairly frequent occurrence. However, as he walked to the office to deliver the message, there was a thunderous explosion behind him as the vat burst, hurling wood and debris in all directions, shattering other smaller vats and beer barrels around it, and releasing the equivalent of 8,000 barrels of beer, weighing 571 tons.

A tsunami of beer, 15 feet high, struck the storehouse wall demolishing it and bringing most of the roof crashing down. Crick was soon waist deep in beer and rushed to help his colleagues injured by falling debris.

The beer smashed into houses in New Street and Great Russell Street, adjacent to the storehouse, flooding cellars and demolishing the backs of houses. A child, Hannah Banfield, taking tea with her mother in a house in New Street was washed from the first-floor room and killed, becoming one of the first fatal casualties of the accident. Her mother was also washed out of the room into the street below and badly injured.

Further along New Street, a group of Irish immigrants had gathered for a funeral wake of a child who had died the previous day. The beer swept down on them, crushing or drowning five of the mourners, including the grieving mother of the dead child.

Elsewhere, people were trapped inside their houses as walls collapsed around them, killing two more.

An eye-witness, an unnamed American visitor in London, was caught up in the flood. He later wrote:

“I found myself borne onwards with great velocity by a torrent which burst upon me so suddenly as almost to deprive me of breath … Whole dwellings were literally riddled by the flood … and from among the crowds which filled the narrow passageways in every direction came the groans of sufferers.”

Rescuers came quickly in large numbers, sloshing through the beer, to pull at the wreckage and dig out those buried; a child was pulled injured, but alive, and rushed to hospital. The sweet cloying smell of warm porter filled the air, mingling with the dust, making the task of rescue more difficult. The cellars of houses were now waist deep in ale.

A parlour of a nearby pub was used as a temporary mortuary and rumours were sweeping the neighbourhood about scores of dead.

But the death and injury toll was amazingly light – eight victims: five women and three children. In addition, five victims were detained in hospital with serious injuries, whilst others were discharged after treatment for their cuts and bruises. The reason for the relatively light casualty rate was that most of the residents were still at work, so the houses were largely unoccupied. If the accident had happened an hour or so later, the death and injury toll would have been much higher.

It was estimated that the flood victims had lost £3,000 in ruined belongings so a fund was set up for them, quickly raising £800 within a month. The brewery estimated their loss to be in the region of £23,000 (equivalent to £66 million today) and the company successfully petitioned Parliament to be spared having to pay tax on the lost beer. The brewery recovered from the accident and continued to brew beer there until 1921.

The destruction of the tightly packed houses in this quarter of London drew public attention to it and led to calls for planning and building reforms. Within a few decades the worst of the slums had been swept away, with a reconstruction of streets surrounding the brewery, leading to the street patterns we see today. 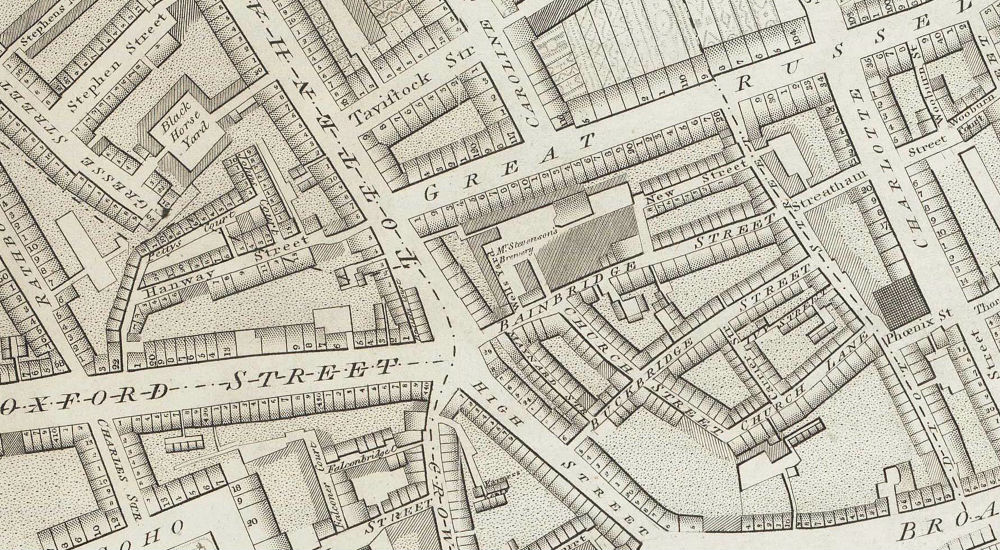 Additional reading: Beer: The Story of a Pint (2005) by Martyn Cornell, published by Headline.
Images courtesy of Zythophile.