How the Great Train Robbers gave themselves away. 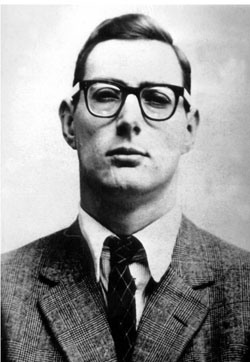 On August 8th, 1963, a gang of masked men robbed a high-speed mail train. They got away with £2.6 million. That would be the equivalent of almost fifty million pounds today.

The robbery had been well-planned. The self-appointed leader, Bruce Reynolds, had planned the robbery meticulously. The train was attacked when it was in open countryside, far away from any towns or villages.

The men had arranged the purchase of a small and remote farm some twenty five miles or so from the scene of the heist and equipped it with everything they needed to lie low there until the hue and cry died down. They were sure that the police, when they discovered the crime, would throw up roadblocks assuming that the gang was heading to Birmingham or London with their haul.

To transport the sacks of money from the train to the farm they used Landrovers and trucks disguised to look like military vehicles. There were often army manoeuvres in the area.

The men developed alibis for the night in question and Reynolds insisted that they wore gloves at all times when they were at the farm. When they robbed the train – which they stopped by tampering with the signals – they had cut the lines of the trackside emergency phones. They had walkie-talkie radios tuned to the police wavelength. They had practised their roles extensively. They had worked out their escape routes for when they left the farm, plus the transportation of the money (in an innocuous countryside horsebox). They had arranged for an accomplice to clean up (or even burn down) the farmhouse.  They had left nothing to chance.

Although the police took the credit for their great detective work, one of the gang actually gave the police the best clue of all during the robbery. It was reported by witnesses – the few people on the train. They had been tied up and one of the gang said to them ‘do not move for half an hour‘.

This led the police, rightly, to believe that the gang were hiding out less than half an hour’s drive from the scene of the crime.

At the farm, where the robbers were celebrating their success, the news came over the radio that it was believed that the gang had used vehicles disguised as military transport. The vehicles had been seen by the witnesses on the train. This was a blow to the robbers but not catastrophic. But the next news was.

The police had figured out that when the victims were told not to move for half an hour that the perpetrators were half an hour away. When the gang heard this they fled. They had planned to stay at the farm for two more days and their associates – in those days before cell phones – couldn’t be contacted about the change of plan.

They had to wing it.

Let down by the clean-up man

As part of the planning, an associate had arranged that a clean-up man would go to the farm once the robbers had left and make sure that no evidence remained there. He was instructed to burn the place down if need be. At first, the associate claimed this had been done but it hadn’t. The clean-up man had chickened out.

The robbers decided that they would have to return to the farm themselves and burn it down. But just as they were planning to do so, the news broke that the farm had been discovered by the police.

The discovery of Leatherslade farm

The London robbers hadn’t accounted for the naturally inquisitive country folk. A farm labourer, John Maris, had wandered onto the farm and thought it seemed suspicious. Two policemen went to investigate. In an outbuilding they found the truck and two Land Rovers. They found the remnants of bonfire – the robbers had tried to burn the mailbags. When they entered the house, they found a heap of post office sacks and torn up paper wrappers with bank markings. They had found the hideout.

I know that IF is a loaded word. But if one of the robbers hadn’t told the captives not to move for half an hour and if they had burned down the farm when they left it, then there’s a good chance that the Great Train Robbery would have been an unqualified success.