I Take You: By Eliza Kennedy

Home » All books » I Take You: By Eliza Kennedy

I Take You: A laugh-out-loud novel. 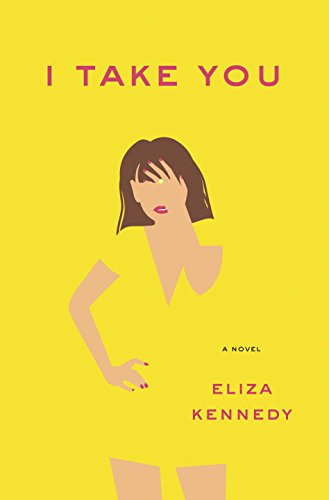 I Take You: A Novel

This is the most wonderful, funny and crazy book. Lily is about to get married – but before I go any further I have to let you know that this is not one of those cutesy Father-Of-The-Bride type pre-wedding stories.

Let me give you an example. She is enjoying her bachelorette party when she gets a message that there’s an emergency at work. Lily is a lawyer so has to respond.

At the office, her boss explains the nature of the emergency and Lily then asks him ‘dress on or off?’ “What a question’ he replies to which she answers ‘I want you to spank me again’. They proceed to make passionate love. True, not the usual behaviour of a girl who’s going to be married in a week’s time.

She and her fiance then fly to her family home in Key West. There her fiance Will meets Lily’s mothers. That is not a typo. Katherine, her birth mother, has a business restoring buildings in the Florida Keys. Ana, her stepmother, is a Congresswoman. Her next stepmother Jane is a socialite. (Lily’s father is currently on his fourth marriage).

Then there’s Isabel, Lily’s grandmother, a just-retired criminal defense attorney. The four older women are the best of friends but soon try to talk Lily out of her wedding plans.

It’s not that there’s anything wrong with Will, he’s a gorgeous Indiana Jone type archaeologist and museum curator. No, the problem is that the older women know what Lily is like. Is it fair to unleash her on the poor man?

Over the next few days, Lily tries to plan her wedding with the remarkably forgetful and nutty wedding planner, drinks a lot, parties with her friends, picks up delicious men and wonders whether marriage is for her while in the meantime, the wedding guests and family start to arrive in Key West.

They bring even more chaos to the island as Anita, Will’s mother and the United States Attorney for Chicago, discovers Lily’s secret past and tries to blackmail her into calling the wedding off, Lily discovers her mother and long-divorced father naked and locked in a passionate embrace and she discovers that the man she has just met and slept with is Will’s boss who is in town for her wedding.

Truly, there is never a dull moment.

The book was released on 5 May, 2015. Pre-order using the link below and be one of the first to read this hilarious book.