Interview:  Radine Nehring, Author of “A Portrait to Die For”

Home » All books » Interview:  Radine Nehring, Author of “A Portrait to Die For”

We were only recently introduced to Radine Nehring, author of A Portrait to Die For.   So when we had the opportunity to interview her we were very pleased.

It is always a delight to learn more about an author while reading their books.  Not only how they came to write, but also the process.  Anyone who has written a book–or tried to write one–knows it requires an above average imagination and a ton of discipline.  We always enjoy seeing how an author puts that to use.

Ms. Nehring has over a dozen books published, with a growing number of fans.

You can find my review of A Portrait to Die For here on Mystery Suspense Reviews.

How and when did you decide to write your first book?

Though city dwellers, my husband and I enjoyed vacation camping trips to National Parks in the United States and Canada for many years. Our country living dreams were established then, and when we finally took a camping trip to the Arkansas Ozarks one April weekend, just a bit over 100 miles from our home in Tulsa, OK, we began thinking country life might be possible.

We bought land, built a tiny cabin on it, and spent weekends there for ten years before enlarging our home and moving to Arkansas full time. After I fell in love with the Ozarks I wanted to share my experiences, so began writing about them. My first essay set in the Ozarks was published in 1986. Haven’t stopped writing about the Ozarks since.

The “To Die For” series has been ongoing for a number of years now. When it first started, did you foresee a series?

Not initially, but I sure enjoyed spending time with my characters and their adventures! So—I had written two books in the series before I sold the first one, and, shortly after, the second (Music to Die For) sold to the same publisher

Did you get to know your main characters before you started or as you wrote?

After more than a decade, are they like family to you?

Very much so. I “see” much more of Carrie, Henry, Rob, Catherine, and Shirley and Roger than I do any real family members.

How many stories ahead do you have in your mind for the series? That is, do ideas come to you as you are writing for more books?

Usually not. I am usually so invested in the current situation and location that I rarely think far into the future. That was not the case with A Treasure to Die For and A Wedding to Die For however. Those two are definitely linked, though they can be read independently. Next? I’d like to write a book of Carrie and Henry short stories.

Can you share a bit about your writing process? For instance do you outline, chapter by chapter, come up with main points, or just start writing and see where the characters take you?

Definitely the latter. I discover my story almost like my readers will. Of course I have a pretty good general story idea, and stories always arise out of the settings I choose, but some of the plot and most specifics pop out as I live events with my characters.

Do you write every day? Hours a day or words per day to keep up the momentum?

Used to write every day and I still do if you count working online, doing blogs, answering emails, and much more. That work takes up a good part of my day–which I do regret, truth be told.

How long did the first book take you?

Still thinking . . . . hmm. Well, my non-fiction book, DEAR EARTH: A Love Letter from Spring Hollow, came out in 1995. At that time I decided it might be fun to try writing a mystery novel since I was an avid mystery reader. I was involved in many projects at the time, but worked on my story off and on, finally finishing in 1999. Took a year or so to sell it to a publisher. The book was released in 2002.

Is it faster now that you have many published, or still about the same time?

My newest novel, A Portrait to Die For, took longer to write than any of my books except the first. I wanted to properly honor my chosen location, Crystal Bridges Museum of American Art, and some of the events covered took quite a bit of research–and thinking!

What is your favorite part of writing?

The writing act itself. It’s really a terrific thing to read over past sentences and think, “Gosh, did I write that? I love the way it reads.” (I forget who said this, but it’s so true for me: “If you write, you must love sentences.” Yes!)

What is the least favorite?

Constant need these days to keep up online promotion and connections and work in several social networking groups. I am not tech-oriented, so fairly frequently, get myself into trouble with my computer–and things go “wonky.” We still don’t speak the same language! And, of course I have much less time to write fiction, or work on a hobby, or read someone else’s book!

When the book is done, edited, and off to the publisher, how do you celebrate or reward yourself?

Guess I don’t. I couldn’t think of any way. Sometimes I am almost sorry the story has ended since I enjoyed taking part in Carrie and Henry’s adventures while I was writing.

Do you have an author who most influenced you to write?

A writing teacher, Peggy Fielding of Tulsa, Oklahoma. She was wonderful . Other authors? I have read so many mystery novels by so many authors that there is a big basket full of authors who influenced me.

Who were your favorite authors growing up?

The Nancy Drew series by a number of authors working as Carolyn Keene.

Will you share what is next? Are you already working on another in the series or something different?

A short story series. Already in work. What fun!

What are you reading now?

Wish I had more time to read. Currently reading and really enjoying The Gardner Heist by Ulrich Boser. (Non-fiction) My husband and I visited the Isabella Stewart Gardner Museum in Boston a few years ago, and still grieve that some of our favorite paintings are currently gone from there. (And I have an ongoing interest in art, art museums, and the art world in general–one reason I chose Crystal Bridges Museum of American Art in Bentonville, AR, as a book setting. A truly wonderful place!) 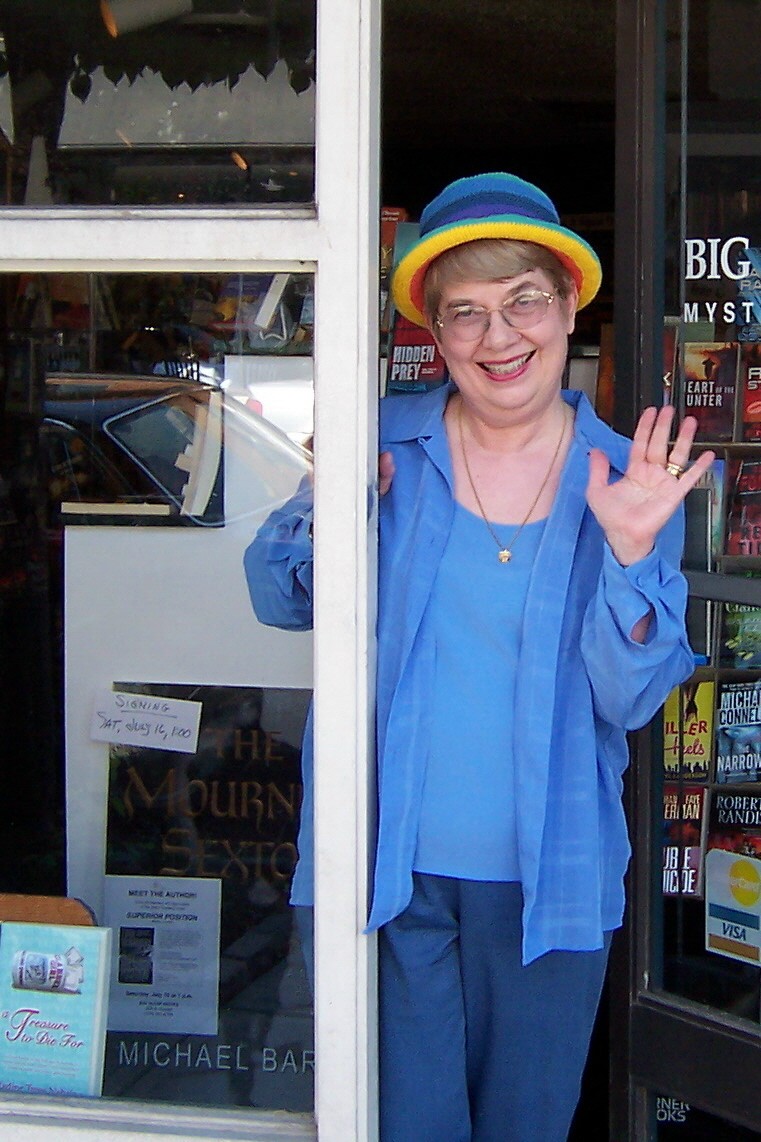 Portrait to Die For
By Radine Trees Nehring

Carrie McCrite, a volunteer librarian at Crystal Bridges Museum of American Art in Bentonville, Arkansas, discovers two versions of a portrait on loan to the museum. When a reporter writing about that portrait disappears, Carrie must choose between honoring Henry’s request that she stop jumping into danger on behalf of people in trouble–or work to find the woman who was a college friend of her son’s.

“A charming marriage of love and mystery.”
—Nancy Pickard, author of The Virgin Of Small Plains

“A delightfully clever novel that I thoroughly enjoyed. Radine Trees Nehring’s warm and believable characters are like good friends that I am happy to see again. The Civil War history, train ride, antiques and diner food were icing on the cake! I look forward to Carrie and Henry’s next adventure.”
—Earlene Fowler, author of Love Mercy and State Fair

“What a great mix for Carrie’s latest adventure! She and Henry have their hands full with suspicious characters aboard an excursion train, switched identities, Civil War treasures, stolen jewelry, rifled rooms, and a “safe house” incident. Did I mention a dead body? Radine Trees
Nehring has given us another ‘can’t put it down’ read.”
—Joe David Rice, Arkansas Tourism Director

In 2002, Radine’s first mystery novel, A VALLEY TO DIE FOR, was published and, in 2003 became a Macavity Award Nominee. Since that time she has continued to earn writing awards as she enthralls her original fans and attracts new ones with her signature blend of down-home Arkansas sightseeing and cozy amateur sleuthing by active retirees Henry King and Carrie McCrite King.

You can find Radine at a variety of sites.  Stop by and connect with her.

Buy link for Portrait to Die For