Journey from the Middle of Nowhere to BFE

Home » All lifestyle » Journey from the Middle of Nowhere to BFE

‘I would rather wake up in the middle of nowhere than in any city on earth’. Steve McQueen

Where on earth is Bumfuck Egypt?

We’ve all been there.

So far off the beaten track that the word lost doesn’t even begin to describe it. The middle of nowhere. The back of beyond. Out in the sticks where Jesus lost his sandals. The kind of place that is so dense and confusing that the end of the earth surely can’t be too far away. Out by BFE, wherever that is… 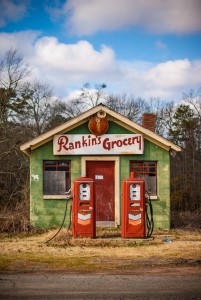 Across America the word that is so often used for regions way out beyond the pale is boondocks. It’s a word so familiar it’s easy to imagine them as picturesque northern mountains, just beyond the Catskills and the Adirondacks.

It turns out, however, that the boonies or Boondocks are much further away that most of us are aware.  It says right here in the Oxford English Dictionary, that the boondocks  is derived from the Tagalog word bundok, which means mountain. American soldiers stationed in the Philippines adopted the word in the early 1900s, changing the meaning to refer to “an isolated or wild region.”

How it came to be commonly known back in the US is an interesting story. The Philippine/American war was a brutal guerrilla style way that resulted in the deaths of  4,200 American soldiers and over 20,000 Filipino fighters. Rebel soldiers would disappear into the jungles and mountains after surprise attacks. Veterans of the conflict brought the word back to the US, where it became commonly used by the armed forces.

It took a training accident back in the US to bring it to a wider use.

On n April night back in 1956 Staff Sgt. Matthew McKeon woke his platoon and ordered them to march to Ribbon Creek on Parris Island, South Carolina. The sergeant then jumped into the creek and ordered his recruits to follow. Chaos soon followed when recruits were swept away. Six of those Marines drowned.

McKeon’s court martial became national news as debate about marine training methods raged. McKeon was charged with manslaughter, cruelty and drinking in violation of regulations and the word “boondocks” was regularly used in the coverage of the incident. One paper wrote that McKeon led his platoon “out into the boondocks and eventually into tragedy.” The word managed to rise above this tragic association to the point where it was the subject of a hit single just a decade later.

The most popular use of boondocks is in  Aaron McGruder’s comic strip, which was adapted into an animated TV series in 2015.  The strip followed two young boys who leave the Chicago south side to live with their grandfather in a sleepy white suburb in Maryland.

In general though, the term is almost cozy, with a mid-west heartland vibe to it. You’d almost want to live there away from the stresses and strains of the town.

I should be in L.A. Instead I’m in the Honeymoon Haven Motel in Bumblefuck, Missouri… Tom Cruise, Rain Man

This place is quite different. You simply don’t want to go there. It’s some kind of Stephen King hick nightmare where the remaining locals use street signs for target practice and if they catch you will grind you up and feed you to the pigs.

Use of the name in print is quite recent, with an entry on .usenet (remember news groups – the first wave of social media?) and there are all kinds of variations of it, mostly out of the mid-western American states. Butt Fuck Idaho, East Bumfuck, Bumblefuck Ethiopia, Buttfuck South Dakota, East Mumblefuck, East Jabib…

It’s also part of US army slang for a remote, hard to get to military base.

BFE does have a historic precedent, and it’s connected to the days of Chicago mobsters. The proximity to Chicago of Cairo, Thebes, and Karnak gives credence to the Wikipedia suggestion that BFE might have arisen from the Chicago criminal scene. You wanted to hide or lie low? BFE could well be code for taking the Amtrak to St. Louis, just over the state border. In the 1920s that really would have been the middle of nowhere.

Writer Diana Gabaldon (of Outlander fame)has a very entertaining piece on the etymology of BFE (read it here) , and a good list of the various ways that English-speaking nations refer to the back of beyond. From the Back o’ Bourke in Australia, Wollybacks in Liverpool to Crackerland and Jerkwater (from the 1982 film First Blood) in the US –  a whole range of imaginative ways to talk about the middle of nowhere. The profanity of BFE, the various figures of speech that have grown like mushrooms around it, and its text-friendly format means that it will stick around for quite a while yet.

Myself, I love to get out into the twilight zones and find those run down places where the last stranger to visit was run out of town on a rail. The ghost towns and the dead end streets. Sure, there are horror stories and campfire tales about folks who disappear in these place, never to return.

Now let me tell you a story about the Axe Murder Hollow.

Susan and Ned were driving through a wooded empty section of highway in the middle of a storm, see,…

An American Werewolf In London – The Pub Scene

All of course set in BFE.