Home » All food » Kitchen Sink Soups On! Come and get it!

There is nothing better than a hot bowl of soup when the temperatures outside start dipping into the minus categories……..Be brave, go outside and enjoy the cold air, it’s good for you. When you are done enjoying that part of the day, come inside, put the mits, hats, coats and all that other winter paraphanalia away or set them on the heat registers for the next trip outdoors, then grab a big bowl of Kitchen Sink Soup!

Now you may wonder how this soup got it’s name. Well sit back and I’ll tell you the story.

Kitchen Sink Soup is the New Button Soup from the story my kids read.

My three children used to read a book called “Button Soup”, it was part of a Disney series of books my children had when they were younger. It was also one of their favourite books to read or have read to them.
The story featured Daisy Duck and Uncle Scrooge McDuck. Well as you can guess by the name Uncle Scrooge, was a miser and didn’t give anything to anybody. He was not at all generous in spirit or deed. But Daisy needs to feed everyone and has very little at her disposal to do that. So she starts by putting a button in the bottom of a big pot of water, sets it on the stove and starts to stir the pot.

Now that does not make for a wonderful soup so far, but as the story goes on, she manages to get a ham bone from Scrooge McDuck, to help make the button soup taste better. She continues cooking the soup in the kichen when other characters come along and want to know what she is cooking. She very patiently explains that it is Button Soup and that it will taste so wonderful when it is finished. She’s a smart cookie and makes each one of them hunger for some of the soup. But in return for a place at the table, she encourages each one to bring something to put into the Button soup. She receives carrots and some potatoes and beans and all kinds of other good vegetables. Everyone who passed by, while she was cooking added an item to the button in the bottom of the big pot. Well it doen’t take too long at all before this wonderful aroma of soup has everyone just begging for some of her Button soup.

In the end, all the people that had given something for the creation of the Button Soup, were seated and having a feast.

Button Soup and other stories! – The start of Kitchen Sink Soup! 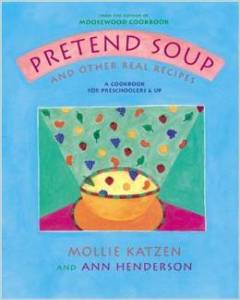 This is where it all started for my Kitchen Sink Soup. My children were fascinated by the story and we started to make our own version of it. My kids still enjoy a good bowl of soup from Mom’s kitchen whenever they come for brunch, lunch or dinner.

Pretend Soup and Other Real Recipes: A Cookbook for Preschoolers and Up

After reading the story of Button Soup, do you wonder why, when people are down on their luck or need something warm in their stomachs, they go to places called Soup Kitchens? Soup is one of the stand bys for many generations of people. According to Wikipedia, there is evidence of soup being made 6,000 years ago. Every country has it’s own versions of favorite soups and Americans consume 2.5 billion bowls of Campbell’s Tomato, Mushroom and Chicken Noodle soups each year. That figure is based on the three most popular canned soups and doesn’t include any homemade soups consumed. That’s a whole bunch of soup!

Soup is one of the cheapest meals to create, that’s why there were so many soup kitchen’s during the depression.

“A soup kitchen, a bread line, or a meal center is a place where food is offered to the hungry for free or at a reasonably low price. Frequently located in lower-income neighborhoods, they are often staffed by volunteer organizations, such as church groups or community groups. Soup kitchens sometimes obtain food from a food bank for free or at a low price, because they are considered a charity which makes it easier for them to feed the many people who visit the soup kitchen.”

Soup meals can be hearty, inexpensive and taste great. When times are tough, many people will make soup one of the mainstays in their homes, but soup can also be used in prosperous times, it’s not just for the poor or struggling families.

My uncle always comes for dinner and if there isn’t a soup for starters, he just feels like something was missing.

Is soup part of your meal time planning?

Soup can be a meal or the start of a meal. It can be eaten year round, even in the summer months. Chilled soups are the rage in the summer when it’s too hot to eat much of anything cooked in a kitchen. Are you a soup lover or do you only eat soup when there’s nothing much else to sink your teeth into? What’s your favourite kind of soup? 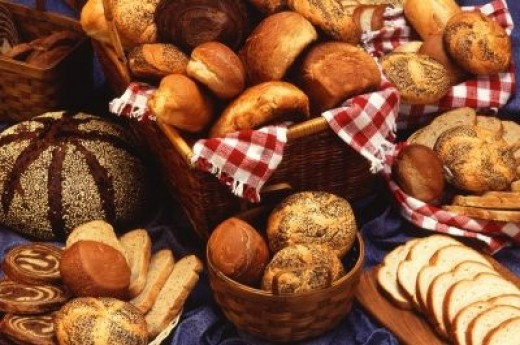 Everything about Making Soup – These links will have you making soup in no time at all!

Once you start making soup a mainstay in your home, you will never run out of ideas with these links. There is every kind of soup under the sun here and each recipe can be custom made to fit your lifestyle and your particular tastes. You never know what you will find hiding in your soup pot, until you take off the lid and try some.

Getting the kids to eat soup is easier than you think!

Soup can either make your vegetables famous or hide them altogether!

If you can’t get your kids interested in soup, maybe the answer is hiding in how they “see” it. If your kids are noodle fanatics (and I don’t know too many who aren’t), then hiding the vegetables and highlighting the noodles may be the answer. How you ask? Easy, I’ll tell you!

When making your soup and simmering the vegetables in the broth, remove all the “hard” things, like the bones or chicken backs or turkey bones from the pot. This can be done easily with a little foresight and some cheesecloth. The cheesecloth can be used to hold the hard bones in one place, while making the broth, when you have added the vegetables and cooked it slowly, the vegetables will get very soft. Remove the cheesecloth with the bones and then use your blender or mixer to pulverize the vegetables. They will become creamy and unrecognizeable. Your water based broth and the vegetables will be blended making a very thick, creamy broth. Just one caveat here, use softer vegetables, like potatoes, cauliflower, broccoli, carrots and squash, do not use hard vegetables like corn and celery, unless of course your kids like these. Cook some noodles in another pot draining them and then add them back into your new soup creation. Sprinkle some dried parsley and cook the soup just a little longer. Voila, vegetable soup with no traceable vegetables!

Have I made you want to try Soup Making, so you can become a Souper Star too?

I’m hoping that this primer on Soup and soup making has whetted your whistle just a little. Soup is easy, affordable, nutritious, delicious and can be made all year long. Are you going to become the next Souper Star in your home? Tell me all about your successes and the reaction of your family. I would love to know how they like your new found expertise in soup making.