Last Chain on Billie: How One Extraordinary Elephant Escaped the Big Top. 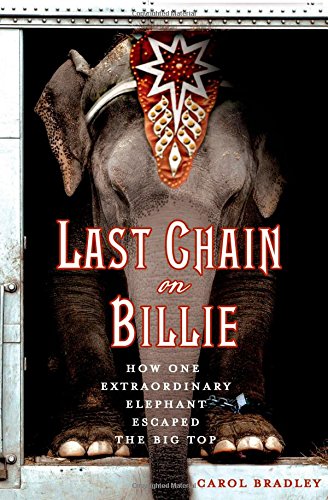 Last Chain On Billie: How One Extraordinary Elephant Escaped the Big Top

Although the title of this book seems to suggest that this is the story of one elephant, it is really a fascinating history of elephants in captivity in the United States. Using the story of Billie’s life as a background author Carol Bradley tells about the earliest days of elephants being brought into the country to appear in circuses, fairs and sideshows.

It also describes how the animals are first captured in Asia, how they are transported to the States and how they are trained. It also tells the heart warming story of Carol Buckley and Scott Blais who had the dream of creating an sanctuary for elephants, a sanctuary where they wouldn’t have to perform and could be free.

In the early days of elephants performing in US circuses, conditions weren’t ideal. The first baby elephant arrived in America in 1796 and we can only imagine what a novelty this was for the people who clamoured to see her. America went elephant-crazy. A ship from England sank in the Delaware Bay a few years later and an elephant that had been on board was able to swim to shore much to the astonishment of onlookers. In 1804 a third elephant arrived in the States.

At first, they were merely exhibited as a curiosity but as time went on, it was discovered that they could be taught tricks and before long no self-respecting circus was without its elephant act.This led to some behaviour by trainers that we find hard to accept these days and conditions for the elephants were far from ideal. Elephants would often rebel at the treatment they received – there are many stories in the book about handlers being injured or even killed by the elephants they worked with.

Carol Buckley had been working with elephants since the mid nineteen seventies and had her own female elephant named Tarra. In 1984, after a performance, Carol was admonished by a member of the public who accused her of abusing the animal by making it perform. This had the effect of altering Carol’s viewpoint.

Meanwhile, Scott Blais was working with elephants too at a safari park. He didn’t like the way in which the elephants were sometimes treated but was told repeatedly by experienced keepers and trainers that their methods were the only way to control the animals. When he met Carol, he realised that this wasn’t the case – she treated the animals with respect.

This caused the pair to develop the idea of starting an animal sanctuary specifically for elephants. They realised that when children saw elephants in zoos, they had only two questions. They would ask if they could ride it and whether it could do tricks.  Carol and Scott thought that it was such a shame that kids weren’t learning anything about the creatures. They decided that their proposed sanctuary would also educate people about elephants.

Their dream took time to become reality but in March 1995 their sanctuary opened in Hohenwald, about ninety miles south of Nashville, Tennessee.

Billie, the elephant whose story we can follow throughout the book, retired there in February 2006. For the past twenty three years she had been travelling the country in circuses- how would she adapt to living as a free elephant? It’s a fascinating story.

Note to animal lovers: It has a happy ending. 🙂