The Last Men Hanged in Britain

Home » All society » The Last Men Hanged in Britain

Gwynne Evans & Peter Allen: The last people to be hanged in the UK. 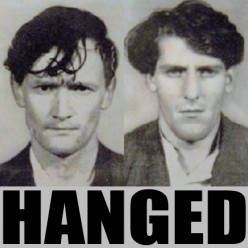 A double hanging for murder.

The men you see here both have the dubious distinction of being the last person to be hanged in the UK. Why? Because they were both hanged for murder at exactly the same time – eight o’clock on the morning of 13th August 1964.

Peter Allen and Gwynne Evans had committed a senseless and brutal murder and despite the fact that they were the last people to be put to death by the law, their names are hardly known today. The people of Britain had been demanding the end of capital punishment for several years due to the high profile cases of people such as Ruth Ellis,  Derek Bentley and Timothy Evans.

In the case of Ruth Ellis, the last woman to be hanged in the UK, the public was uneasy due to the fact that she had committed a crime of passion when she shot her lover. Timothy Evans was innocent of the crime for which he was hanged and Derek Bentley was put to death simply because of a strange loophole in the law.

It’s surprising that the names of Gwynne and Evans – and the details of their crime – aren’t well-known. It featured a crime that went badly wrong and a curious menage a trois.

When they were hanged, they were young men. Evans was twenty four and Allen just twenty one. They were both petty criminals and Gwynne Evans had what today we would call learning disabilities. Even the army had kicked him out of their ranks and he found it impossible to hold down a job.

Peter Allen was the brighter of the two – just. Like Evans, he was unable to keep a job for long but at least he had a settled home and a young wife. Evans was a drifter and when he found himself in Preston,Lancashire, he lodged with the Allens. Their short criminal career together began.

Known to his friends as Jack, John West was a truck driver. He lived alone, was single and thought to be homosexual. On the evening ofApril 7th, 1964 he received a visit from a man he knew only slightly – Gwynne Evans. Evans had turned up at West’s home in a stolen car. With him in the vehicle were Peter Allen, Allen’s wife Mary and her two babies, the latter three being strange companions for a crime spree.

The two men entered West’s home, leaving Mary and her children in the car. What happened in the house will never be known exactly but neighbours alerted the police when they heard the sound of fighting and the car driving away at speed. The police arrived on the scene and found West’s body – he had been stabbed in the chest and beaten with an iron bar. What’s more,they also found plenty of clues.

Why was Mary Allen in the car that evening with her children,her husband and her lodger? It seems that Gwynne Evans was more than simply the lodger; he was having an affair with Mary. She admitted this when the pair were brought to trial and when the two men were in jail awaiting sentencing, she wrote letters to her lover.

Gwynne Evans, never known for intelligence, had managed to leave his coat at the murder scene. That wouldn’t have necessarily led to the men’s arrest – except in the pocket they found his army ID, a letter written to him by (another) girlfriend which showed her address and, believe it or not, the coat even had a name label identifying it as belonging to Evans.

The stolen car was found quickly too – the men had abandoned it not far away so it was not long before the police tracked down Gwynne and Allen and soon had them under lock and key.

Unlike the three cases mentioned above, those of Ruth Ellis, Timothy Evans and Derek Bentley, it was a clear-cut case. There was no doubt that West had been brutally murdered by the two arrested men. The court case was a short one and both men were sentenced to death. Their motive had been robbery and yet their proceeds from the crime were just two bank books and West’s watch. Although they had been sentenced to death, they were sure that they wouldn’t hang.  Public feeling was against capital punishment.

It was common knowledge that the death penalty had been greatly debated in parliament and the public was aware that hanging would soon be abolished in Britain. In the year before, 1963, there had only been two hangings and many prisoners who had committed murders had their sentences altered to life imprisonment.

So no-one, especially Evans and Allen themselves, believed that they would be hanged. But they had simply committed their crime in the wrong county. Many counties, aware that the death penalty was going to be abolished, no longer hanged murderers but Lancashire, where Evans and Allen had committed the murder and been tried, wasn’t one of them.

Everyone, including the two prisoners, expected that this too would be their fate. But it turned out that they were simply in the wrong place at the wrong time. Many area authorities, knowing that the death penalty would be abolished, no longer hanged their murderers. But this wasn’t the case in Lancashire.

The two men were still hoping for their lives to be saved but on the day before that set for the double executions, Mary visited her husband in jail to tell him that there had been no reprieve.

The following year, the death penalty was abolished.