Looking at Paintings (9) David Hockney ‘The Road Across the Wolds’ 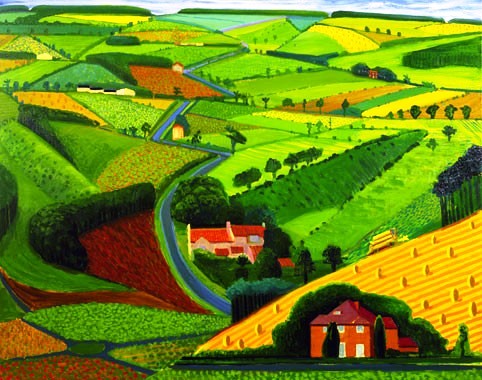 When David Hockney’s Yorkshire landscape paintings were first shown at the London Royal Academy in 2012, they attracted mixed reviews. The art critic of The Economist admired some of the works, but wrote, “Others, I would argue, would not be celebrated at all if they were not by Mr Hockney, such as this ‘The Road Across the Wolds’.”

But he was wrong. The painting, now on permanent display at the Hockney Gallery, Salts Mill, Saltaire, in West Yorkshire, has a commanding presence, no matter who the artist.

It is a large work: 48 x 60 inches, oil on canvas. It was painted in 1997 during the artist’s 20 year residency in the Yorkshire coastal resort of Bridlington and depicts the Yorkshire Wolds in late summer. The artist is looking down on the scene and on to the horizon; the sky is glimpsed beyond the treeline.

The colour strikes you first, then an awareness of perspective, and then a gradual awareness of how Hockney directs the eyes of the viewer from left to right across the canvas. I later discovered too, that there is a poignant story behind the creation of this painting.

The colours of nature, of high summer, dominate the canvas. The many hues of green are juxtaposed with other earth colours: mahogany brown, gold, terracotta.

The gold of fields and terracotta of the foreground houses breaks into and relieves the verdure of the whole. The blueness of the road introduces an unnatural colour, almost as an intrusion to the scene.

The isolation dominates: a harvester is at work on the field in the foreground, but this is the only sign of human activity. But the harvester is a reminder that this is countryside tightly controlled and managed, divided, measured, and used. At the same time though, nature is shown overshadowing Man: the trees creep up and loom over the house in the foreground. There is a reminder: loosen a grip on the land, and it will soon overcome you.

The narrowing road twists across the landscape, gradually toward the horizon right of centre. The snake of the trees, mahogany soil, and terracotta roofs of the houses grab our attention and lead the direction of our eyes to the diagonal of fields, centre right. The land is parcelled into triangular wedges and rectangular strips, and the eye travels across and along these to the far distance. The curvature of these strips of land and their convergent points cleverly presents us with the optical illusion of an undulating landscape.

The best viewpoint for viewing this canvas is, like the scene itself, from a distance. At the time of my visit, by accident or design, there was a chair positioned in the gallery around 10 yards from the painting. From here you can comfortably take in the whole scene and gain a sense of the scale and vastness of the Wolds in this part of Yorkshire. Walk closer to the canvas, and like the scene itself, more personal detail is revealed: the brushstrokes, the layers and gloss of paint.

The scene depicts the final stage of summer. Hockney journeyed from Bridlington along the road to visit his close friend, Jonathan Silver, who was terminally ill in hospital with pancreatic cancer. Hockney said of this time:

“I was driving constantly every day from here [Bridlington] to Wetherby, just the other side of York. It’a very pretty drive. You just drive through countryside … In the end I was going every day. I was going up and down Garrowby Hill, every day, so you are looking at the landscape. He died in late September, so I watched the harvest, I watched the ploughing, I watched the land constantly changing, observing all from a little open car.” *

Jonathan Silver (1949–1997) was born in Bradford and had met David Hockney when they were at Bradford Grammar School together. Silver studied Art History & Textiles at Leeds University and became a successful businessman, opening a string of menswear shops, and later buying the derelict Salts Mill in Saltaire and eventually converting it to the successful retail and artistic centre it is today, including a huge exhibition space for Hockney’s work. It was Silver who encouraged Hockney to paint the Yorkshire landscape of their birthplaces.
‘The Road Across the Wolds’ is both a pictorial record of the countryside and a reminder of the artist’s journeys to visit his dying friend.