Louis le Prince: The Man Who Invented the Movies

Home » All entertainment » Louis le Prince: The Man Who Invented the Movies 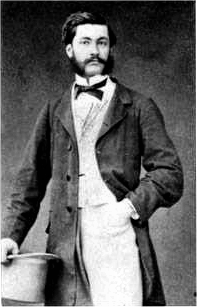 Louis le Prince: The man who invented the movies

Some people would say it was Thomas Edison who invented the movies. Others might mention the Lumière brothers. But in fact,  movies – motion pictures – were invented by the man you see on the left.

But Louis le Prince is rarely credited with the invention and more than that, his story ends with his mysterious disappearance.

Was this foul play because of his invention?

Louis le Prince, as you can deduce from his name, was a Frenchman. He was interested in photography even when he was young. He studied both painting and chemistry – both good subjects for a photography career.

When he was in his twenties, he moved to England – to Leeds in Yorkshire. This is where the first moving pictures were made.

A couple of years after his move to Leeds, he married and he and his wife became well known for their photography skills. Louis continued to work on the idea of a camera that would produce moving pictures and patented his camera on 10th January, 1888.

Two years later, he arranged to go on a trip to the United States to promote his invention. He decided that first he would visit France to see his family. He left his family on the 16th September 1890, boarding a train for Paris – his brother saw him off at the station.

He was never seen again.

No-one recalls seeing him on the train. He wasn’t aboard when it pulled into the station in Paris. No trace was ever found. His luggage had disappeared too and a body wasn’t found. It remains a mystery to this day.

It was decided that there could only be two explanations – either Louis had taken his own life or he had been murdered. The first theory held little ground because there had been no indication of any feelings in this direction, he was fine financially, he was happily married with a son and he was excited about his work and promoting his new invention. The same argument applies to the suggestion that he had faked his own death.

But if he had been murdered, who was responsible? Could it be one of his many rivals who were also trying to be the first to develop the industry of moving pictures?

Louis’ wife and now-adult son were convinced that foul play had been involved. Court cases took place where other inventors disputed Louis’ patent. Adolphe, who had been his father’s assistant, appeared in a 1898 inquiry.

Two years later, Adolphe was discovered dead when he was out duck hunting.

The first moving pictures were taken in Leeds, Yorkshire