Home » All food » Our Low Fat Hot and Sour Soup

Hot and Sour Soup variation by Sherry Atbutterfly and my daughter IoBlue [her pen name].

I LOVE Hot and Sour soup! I cannot remember when I first had it but I am guessing I was about 30ish when my boyfriend and I started to go to the local and extended area restaurants trying out their ‘house’ Hot and Sour soup. Each restaurant had their own version! It was the one soup that he loved to order and make at home. I soon fell in love with the soup and him!

Save Print
Our Low Fat Hot and Sour Soup 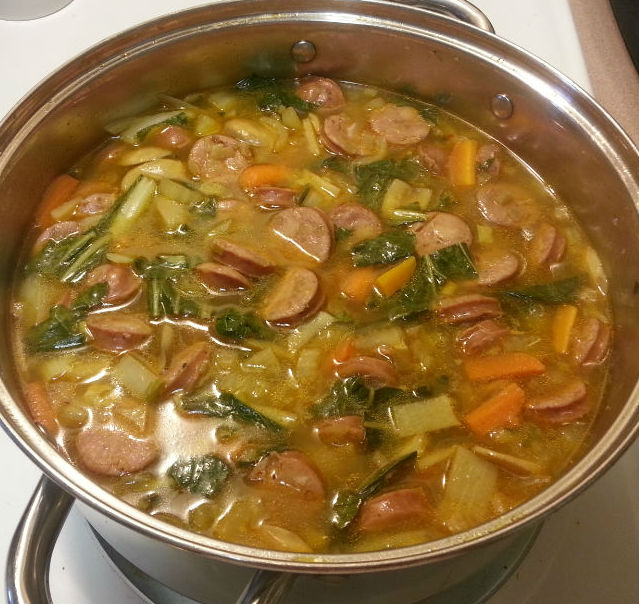 Ingredients
Instructions
3.3.3077
My daughter’s recipe can be adapted easily for vegetarian version. Omit the meat and use tofu, substitute the chicken stock for vegetable stock. The real hot and sour soup adds a scrambled egg to the mix at the very end which you drizzle in slowly and it cooks in threads. I have not tried the tofu sausage, that could be an option as well.

We lived fairly close to San Francisco and got our ingredients there in Chinatown after having a meal in one of the restaurants. He got several woks and bamboo steamers and as well as other supplies. He had a gas Wolf Range© that he got when he bought a vacation property with a restaurant, a house and cabins back in the 1980s in the bay area of California. He used all the restaurant kitchen equipment and remodeled his home with the 4 burner gas Wolf Range and grill with oven, and part of the steam table. It was a great kitchen that I got to play in when he and I got married.

Since then, some 30 years later, I always order the hot and sour soup when I am out. I had assisted my husband many times with his soup, otherwise I did most of the cooking then. 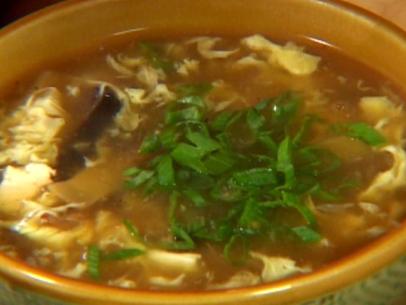 When I moved in with my youngest daughter who was an adult in 2011, I asked her to make me some hot and sour soup. We found this recipe on the Food Network. We made it different and below is what she did. This is the photo for Tyler Florence’s recipe.

We found Aidells© Chicken Sausage and decided to try that in the recipe. She also used Italian Bulk sausage that is low fat about 90% lean. Both come out really well. 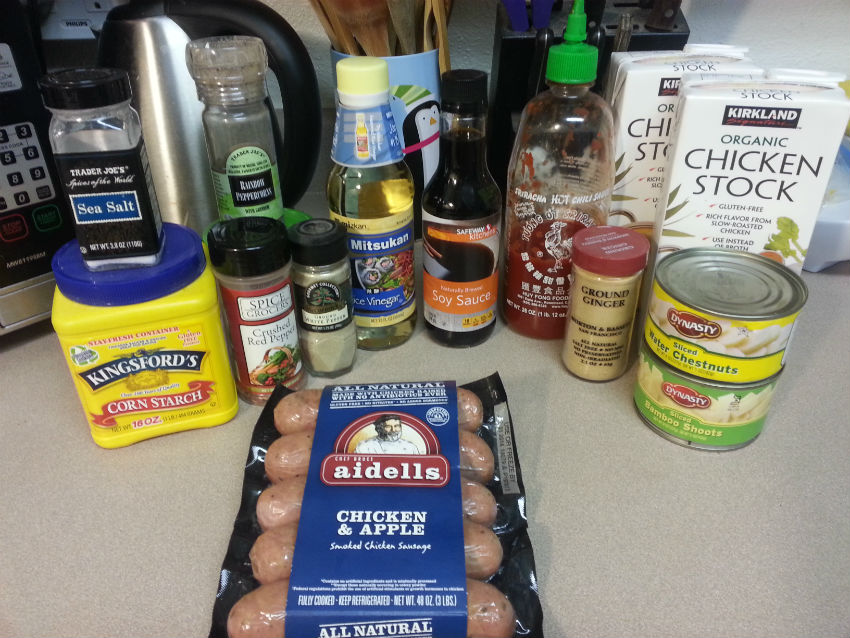 Our version of the Low Fat Hot and Sour Soup

My daughter used regular white button mushrooms. She used Ginger that was already processed in a tube. Instead of Red Chile paste she used dry Chile flakes. Instead of Barbecued Pork she used Aidells© Chicken with Apple smoked Sausages. She used Chicken Stock from the box – Kirkland© brand. She used green onions and cilantro. In addition to the above she added carrots, and Bok Choy at my request. She omitted the Tofu and the egg. The knack of adding that egg is tricky! My husband had a tough time of it as well! We also added Sriracha© brand hot sauce.

At Betty Foo Hunan online is a good recipe as well with the Day-Lily Buds. My husband always added the Day-Lily buds.

Funny – I went to a restaurant in Western Washington State where I was living and the owner had a market next door to the restaurant where she sold ingredients to make Asian foods. I asked her if she had some day lily buds for the hot and hour soup and she said that it was NOT used in hot and sour soup. Each province has their own ideas of the soup.

Whether you want tofu or not, or want to make it vegan or vegetarian you can change and omit things to suit your desires. The main flavor comes from the hot and sour of the ginger, vinegar and the hot spices. The meat is optional. I had some vegetarian hot and sour soup from a local Chinese restaurant that had tofu and used snow peas and some other veggies and it was great! I am not sure what they used for the broth, perhaps some vegetable-mushroom clear broth they make in advance. The restaurant had a lot of vegan and vegetarian on the menu.

I like the pork but wanted to cut back on the fat content so I liked Aidells Chicken Apple smoked sausage my daughter had been getting lately. So I call the soup low fat for that reason.

Aidells has other flavors of their sausages and we have added them to this soup and they are great in the soup and with other dishes my daughter makes for us.

We have not tried all of them yet, but the ones we have had so far are all really good! All have Chicken in them as the base.

Photos of food prep and cooking: 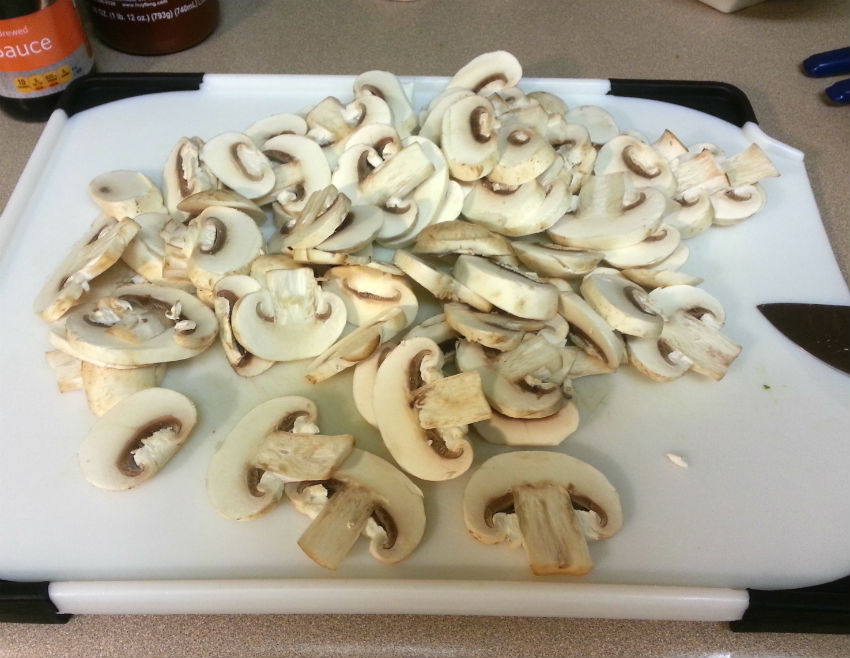 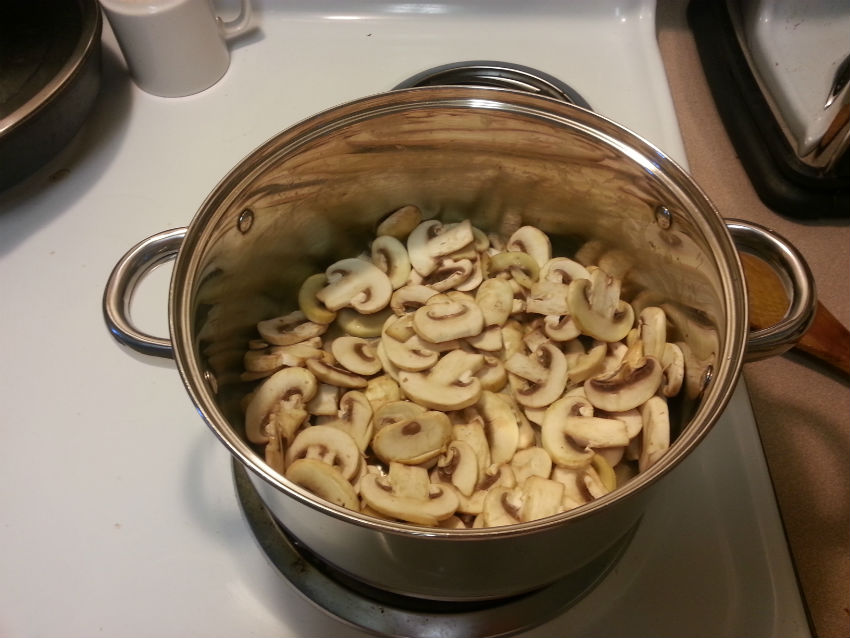 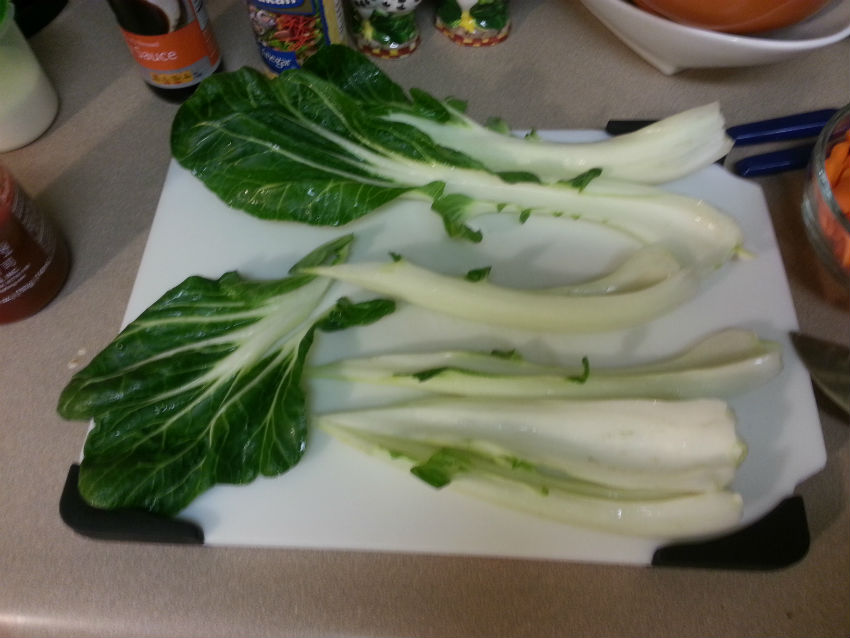 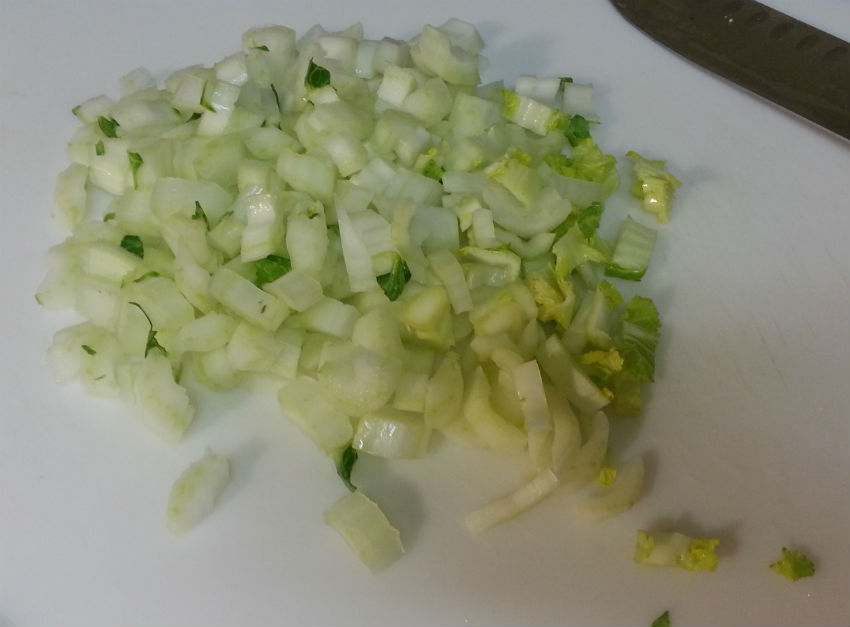 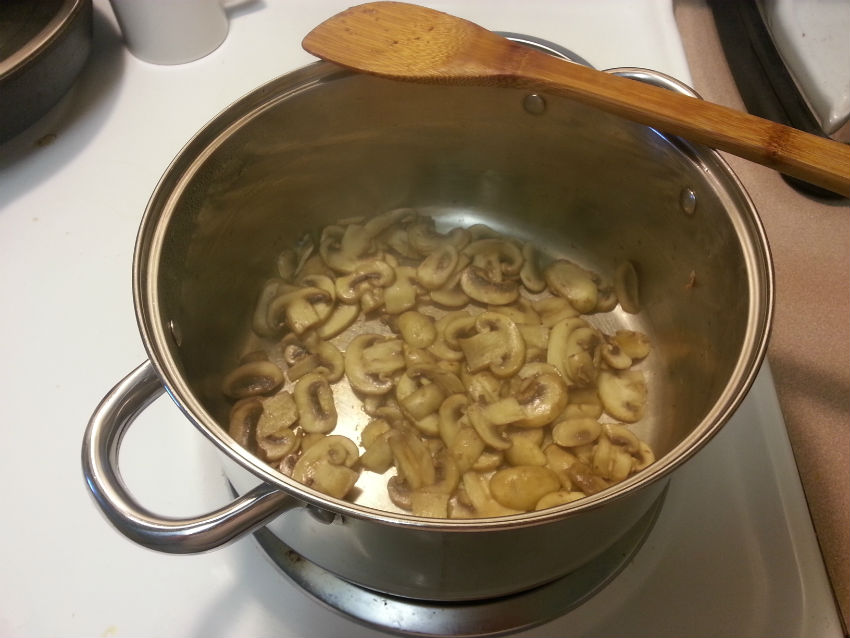 Add the white parts of the bok choy and saute, add green onions and saute 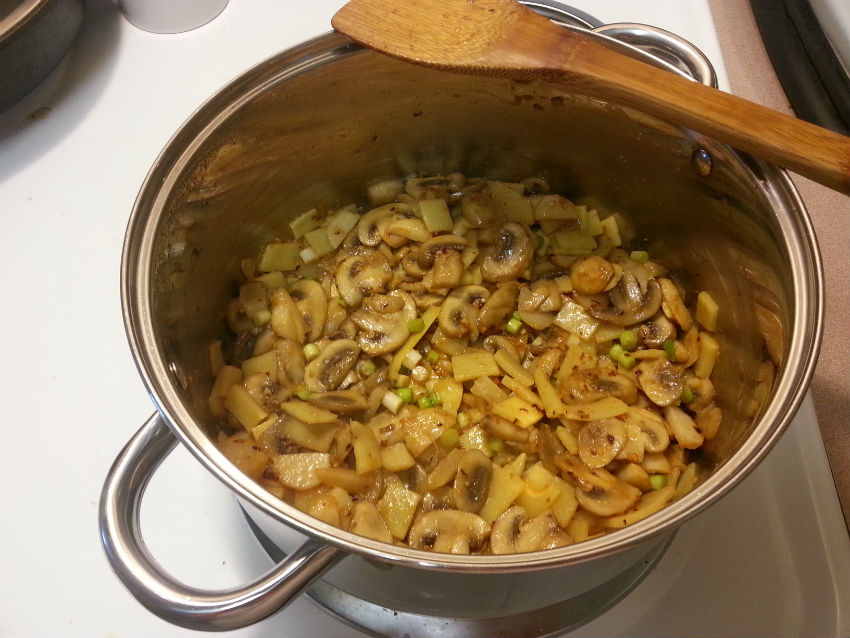 After all ingredients are added, simmer 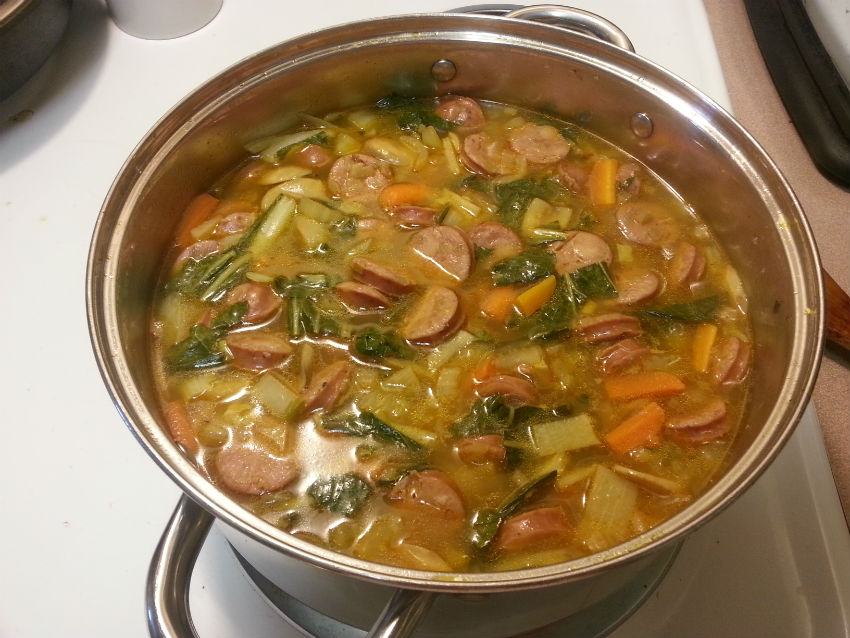 Serve in bowl, add more chopped green onions and chopped cilantro – place extra vinegar and Mongolian hot oil for individual use, there was no cilantro when we made this batch 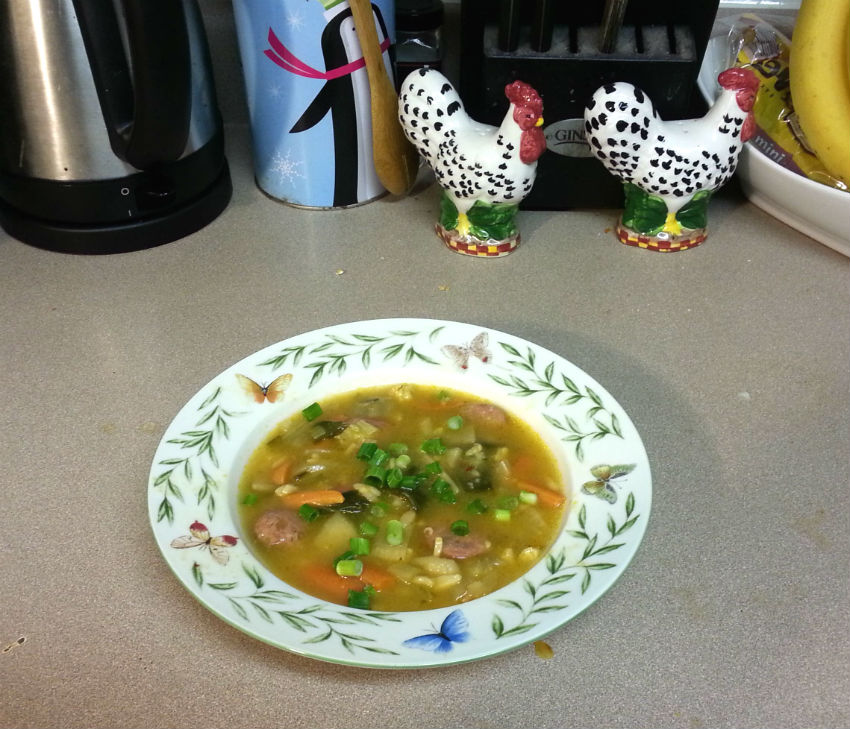 That’s my favorite bowl with the butterfly’s and my daughter’s hen and rooster salt and pepper shakers.

We freeze the leftovers in 1.5 cup or serving size containers – leave a space for expansion in container if freezing, add cooled containers in refrigerator, and freeze a few hours later. I usually finish it off pretty fast, but freezes well for a few months.

Any version is good, the ginger, vinegar and hot oil is what makes the flavor of this soup unique.

As my favorite cook, Julia Child use to say ~ Bon Appetit!