The Man in Black: The Legend of Dale Earnhardt

Home » All lifestyle » The Man in Black: The Legend of Dale Earnhardt

The Man in Black: The Legend of Dale Earnhardt.

It was on the third lap of the 2002 Daytona 500 that the tribute began. Fans stood silently as the NASCAR field thundered on. Fittingly the leading cars, the silver 29 and the NAPA 15 were both owned by Dale Earnhardt Incorporated – and the fans held hands aloft with three fingers high. The intent was to remember friends and heroes but at that moment they had only one man in mind.

Dale Earnhardt, the man in black (so named because of the black Goodwrench livery of his No.3 Chevrolet Monte Carlo) had lost his life towards the end of the previous years’ event, taking away the life of the NASCAR’S most storied driver.

A wander around infield tells the story. The most common decal by a long way is the black and white 3 of seven-time series champion Dale Earnhardt. OAfter Dale’s death the commemoration business want crazy, from the glossy black Monte Carlo SS Dale Earnhardt Signature Edition saloon car down to T-shirts, leather jackets, wind chimes, scented candles and ceramic bottle stoppers. There’s even a shotgun or two with an engraved barrel. All tasteful, like. Nothin’ fancy. 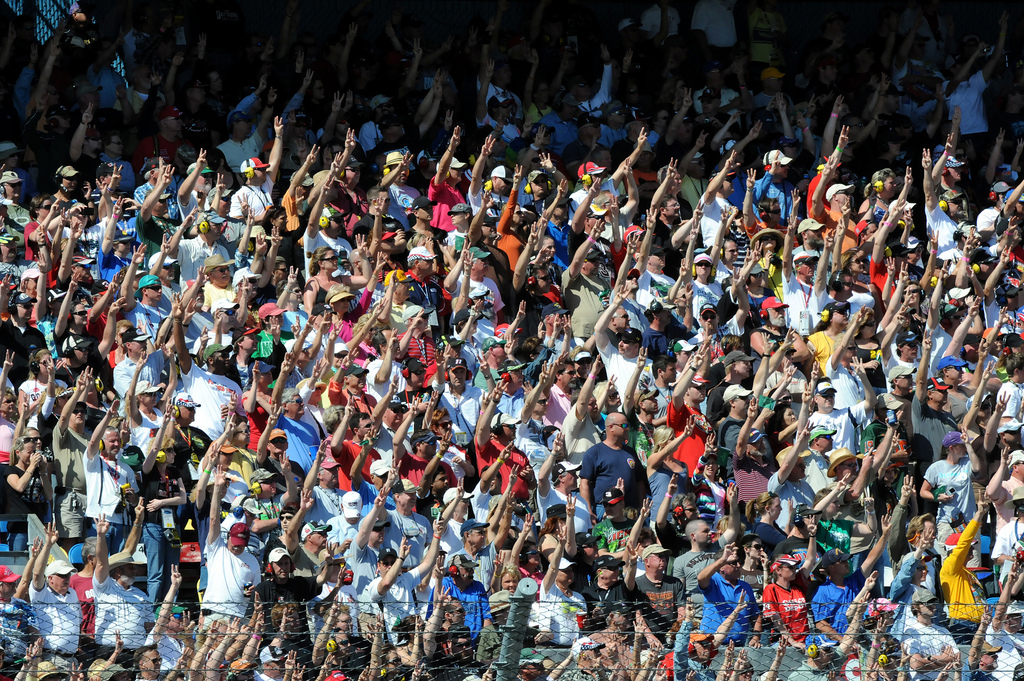 NASCAR fans hoist three fingers into the air during the third lap of the 53rd running of the Daytona 500 on Sunday to honor the late Dale Earnhardt, who was killed in a crash here 10 years ago while driving the No. 3 Goodwrench Chevrolet. U.S. Army photo by Tim Hipps, FMWRC Public Affairs

NASCAR legend has it that Dale was persuaded by his wife Teresa to trademark his name and signature and to turn his ”Intimidator” image into a brand. Sure enough the NASCAR memorabilia market grew beyond everyones expectations – $1.34 billion back in 2001 and growing by the race.

These days the drivers are known as much by their commercial affiliations as they are by their accomplishments on the track. The 2001 Daytona 500 might have been the first cup race I watched, but I sure knew who Dale Earnhardt was. He was the Intimidator, the Man In Black, old Ironhead. That bushwacker moustache, those mirrored sunglasses and that take-no-prisonor driving style had propelled Big E to a kind of epic hero of the South. Fearless and cool. I’d seen him fronting a whole range of products and corporations, not just GM’s Goodwrench Service  as advertised on his Chevy race car. 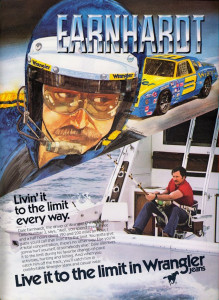 Earnhardt – Livin’ it to the Limit advertisement, 1981

The brand that helped him create this iconic outlaw character more than any was Wrangler, who signed up Dale during the 80s. An advertisement published in 1981 quotes him as saying “Well, you spend three and a half hours doing 190 and 200 miles an hour, I guess you call that livin’ it to the limit. You’ve gotta give it 100% concentration, there’s no other way. Else you’re gonna hurt yourself, or somebody else”, showing him at work in the race car and hard at play reeling in a catch from a fighting chair. In another ad from the same period the focus was on his drive for success and achievement. “Dale won’t settle for second place…” 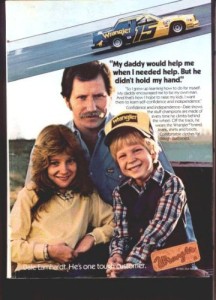 A few years later and the focus is on family. The ad features two of his children and quotes Dale talking about his own daddy, Ralph Earnhardt who had been a NASCAR driver back in the dirt track days. “My daddy would help me when I needed help, but he didn’t hold my hand.

“I grew up learning how to do for myself. My daddy encouraged me to be my own man, and that’s how I hope to raise my kids” the copy continues. Comfortable clothes for tough customers. Dale as the rugged family man with confidence and independence, very much a part of the American frontier hero character. 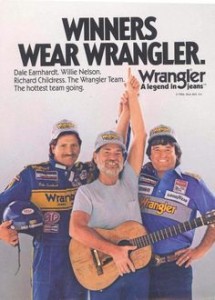 By ’86 Wrangler celebrated Dale Earnhardt’s winning season by placing him and team boss Richard Childress alongside country singer Willie Nelson. Another ad in the series would read “Wrangler jeans and these three men have a lot in common. They’re all authentic down-to-earth and hard working. They have a lot of fans in common too, and their fans stand for the same values.”

Placing a race driver together with a country singing star is one thing. Placing two outlaw characters – Earnhardt and Nelson together makes an altogether different statement. Neither had been seen to play the game, and, as writer Mark D. Howell has it in his book “From Moonshine to Madison Avenue” these print advertisements present Earnhardt as more than a stock-car driver, they present him as a symbol in American cultural mythology, a western outlaw. 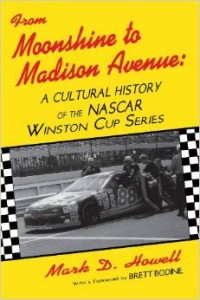 From Moonshine To Madison Avenue: Cultural History Of The Nascar Winston Cup Series
by Mark D. Howell. Click to buy it!

He writes “The Winston Cup stock car driver is considered fearless, intuitive, physically adroit and emotionally cool. Like the scouts who tempted death along the Great Plains, NASCAR drivers tempt death on high-banked ovals at speeds of better than 200mph. There is little difference between dodging bullets along a trail in Wyoming and dodging concrete walls along a straightaway at Daytona.”

Others would be less poetic. To the average driver stuck in bumper to bumper traffic in the rush hour every morning Earnhardt drives through traffic, rubbing an bumping his way through the pack. he thought think nothing to give slowpokes a little nudge. Or, if that wasn’t enough, a hard nudge.

Short track racing taught me to ask no quarter and give none,” Earnhardt told the press back in the day. “I’d never hit anybody with the idea of wrecking him, but I’ll rub a few fenders. That’s what racing’s all about…If you don’t win, you lose. It’s as simple as that. And I’m not here to lose.”

Dale didn’t let anyone get in his way. He just cut right through and to hell with the consequences, just like smokin’ Joe in the freeway traffic is itching to do.

Even though Dale’s gone, the signature decals do just fine, keeping memories alive. 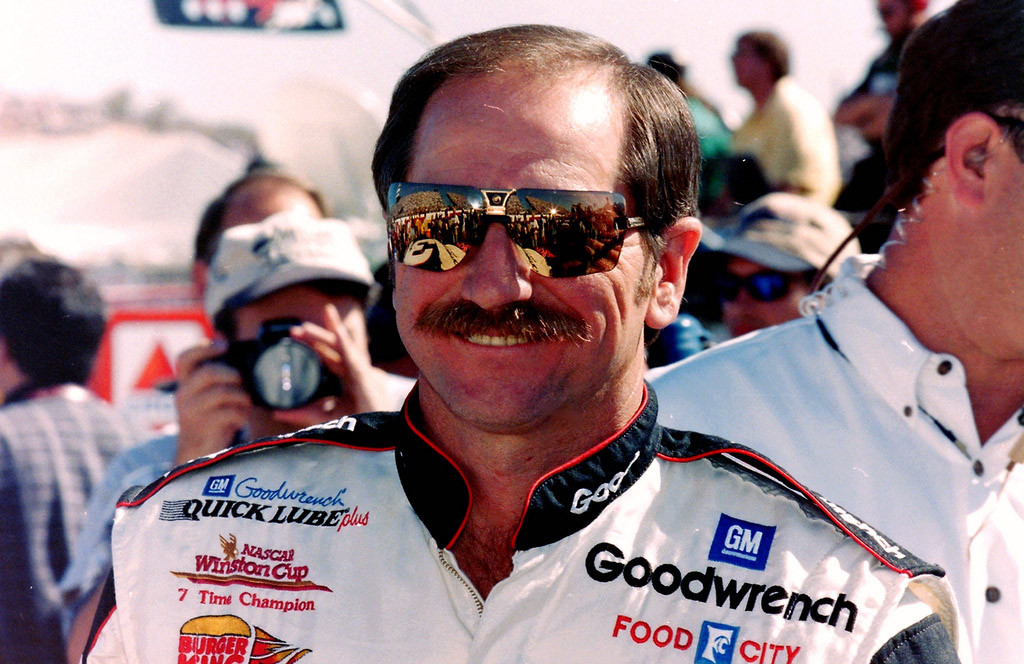