Who was Marli Renfro?

Home » All entertainment » Who was Marli Renfro?

Marli Renfro: You know her well. 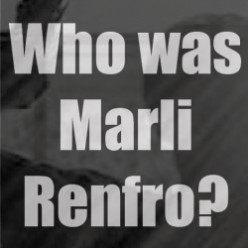 The chances are that if you like movies, you know who Marli Renfro was but you might not recognise the name. What’s more, I’m willing to bet that you’ve seen her completely naked.

She was in one of the most famous films – ever. But few people know her name.

She was born in America in 1938. She grew up to be very attractive and she was only in her early twenties when she took part in the movie. This was in 1960 and yet the film has become a classic. IfI were to show you the scene featuring Marli, I’d be very surprised if you didn’t know exactly which film it’s from. What a mystery.

But there were mysteries in her life too. For this is the story of a woman who was murdered twice. Yet at time of writing, she’s still alive. Curious?

She met and made contacts with people in the film industry through her father.  However, despite being in such a famous film, Marli wasn’t an actress. But because of the work she had done so far in her young career, she was certainly accustomed to appearing in front of cameras.

Marli in the movies

Marli was contracted by one of the best-known directors of the day for his forthcoming film. You’ll recognise his name for sure. But she wasn’t employed to act. She was going to be in one of the most famous scenes in cinema history – and yet her name didn’t appear on the credits.

Murder in the movie

Despite being one of the most famous scenes in movie history, Marli’s appearance lasts only for a couple of minutes. For some of that time, she is behind a curtain. I imagine that now you’ve realised what Marli’s part was?

In fact, a shower curtain

You realised – Marli was the body double for Janet Leigh in Alfred Hitchcock’s Psycho. All actors had stand-ins – people who would literally ‘stand in’ for the star for lighting tests and so on but Marli was employed specifically to be the body double.

Marli was in two more films only but then seemed to disappear into obscurity. Then in 1988 came the shocking news that Marli had been murdered – this time for real.

One person who was particularly shocked was a man who writes about real-life crime, Robert Graysmith. For some time he had been thinking about writing about Marli and her life after Psycho. Now it was too late to interview her.

Going forward to 2001, Graysmith heard more about the murder. It seems that a man had been arrested for another violent murder in 1998 and confessed that he had killed Marli too.

How ironic it was – she had been in the most famous murder scene ever in the movies and then she had become a real-life murder victim herself.

Graysmith, quite probably figuring that a book would still be possible, decided to look into the murder further.

Over the next few years, there were three things about the case that he couldn’t get out of his mind. The first was that the newspapers had described her as Janet Leigh’s ‘stand-in’.

In fact, she hadn’t been the stand-in, another woman had. Marli had been the body double. Was he just being pedantic? They also said that her real name was Myra Davis. Graysmith had investigated Marli’s life extensively and never heard that. But another curious fact was reported in the media. It was reported that Marli had been born in 1927. Really? Was she forty three years old when she was in Psycho?

What clinched it for Graysmith was when he spoke to her granddaughter. She agreed that her grandmother had been Janet Leigh’s stand-in but was adamant that she would have never appeared naked.

There were two women