Michael Who? – When England Beat Germany

Home » All society » Michael Who? – When England Beat Germany

“Football is a simple game; 22 men chase a ball for 90 minutes and at the end, the Germans win.”
Gary Lineker

One sunny day back in 2001 I was minding my own business in a Florida swimming pool just a linebacker’s throw from the Gulf of Mexico. A friend had just come back from the beach holding a hammerhead shark he’d just caught in the shallows, and which would shortly join the ingredients for that evening’s meal. The pool was filling slowly as the day got hotter. Then an unmistakable Brummie brogue called across to a pink bloke in a Happy Hammers hat. 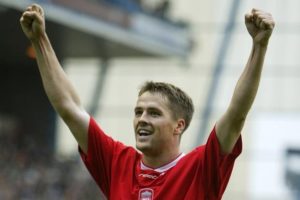 Following the beautiful game has gotten increasingly hard the longer I have lived away from England. I grudgingly accept that the game is really called Sacker and it’s mostly played by female 9th graders. I came to terms with the fact that no-one sang at Miami Fusion games and got used to smart-suited American cable presenters smarming about the ‘EPL’. I could even wait until Monday before I looked up the scores on the internet.

The guys in the pool were literally from another world, sports wise.

I kept quiet, comfortable in the fact that I now knew far more about the Philadelphia 76ers and the Miami Heat than I did about the likes of Aston Villa and West Ham United. Time was I’d have been right in there obsessing about David James’s cruciate knee ligament like my very life depended on it. What did I care about Micheal Owen and some game being played four thousand miles away.

Cut to an SUV weaving through the lunchtime traffic on the I-95 north of Fort Lauderdale. Three English blokes and a Costa Rican.

The radio was tuned to a Spanish-language channel covering the USA v Honduras World Cup qualifier, but the conversation was about England vs Germany. Another footballing encounter of mythic proportion about to kick of in the Olympic Stadium in Munich.

And no, we couldn’t miss it.

We were heading off to a home out west of Boca Raton where – rumour had it – the game was the main feature of a house party being thrown. Beers were bought and conversation turned to the impossible English task of getting a result in Germany, who’s national team had only once lost a World Cup qualifier in thirty years.

At the party we joined 30 other lunatics in a packed room at the back of the house, where a mass rendition of “Football’s Coming Home” drowned out the pre-game show. A Union Jack was unfurled and the German national anthem was observed in the traditional scathing manner. “God save the Queen” was noisily sung at twice the speed of the Oompah bandsmen.

30 loudly inebriated football fans leapt around the room like it was a bouncy castle. “Five One! Five bloody one!!!” The room had been bedlam for over an hour. Now the occupants stumbled blinking into the sunshine outside, grabbed yet another beer and drank to a godlike footballing genius called Michael Owen, scorer of three of the goals. Two weeks ago he was just another fancy footballer a whole world away. Now he was everything. A saviour. A superhero.

From being embarrassing underachievers the young England side (average age 23) had just thumped the pride of Germany in a game that eclipsed even the 1966 World cup Final for sheer thrills, excitement and good old fashioned banter. And we couldn’t believe it. The stuff of dreams.

Our unforgettable host, Brad, stuck a note on the TV saying “Remember where you were when the English stuffed the Germans.”

As we danced a conga around the orange trees it was all we could do to remember which way was up!