Home » All food » Peach Melba: Nellie Melba and her Prince

Peach Melba – Nellie and her Prince.

Sadly, many of the recipes we see for Peach Melba today use canned peaches. These are all very well and good but when this recipe was developed by Auguste Escoffier in 1892 or thereabouts, the lovely, fresh fruit was used.

Famously, the dish was created for Australian Dame Nellie Melba, a celebrated opera singer of the day. At the time, she was having a torrid affair with Prince Philippe, the Duke or Orleans. He had been engaged when he met Nellie (to his cousin) but the engagement was hastily ended when he met the opera singer. Nellie wasn’t free either. She was married, although estranged, and her husband filed for divorce claiming the prince as the co-respondent.

Her husband, Charles Armstrong, was an aristocratic British man who had been sent over to Australia by his despairing family due to his unacceptable behaviour.

This was something of a wake-up call for the prince who realised that maybe his relationship with Nellie could seriously damage his reputation – he had no intention of being cited in court as he was claimant to the French monarchy and was actively seeking the throne. So he arranged to take himself off to Africa for a couple of years.This ended the relationship.

None of which has anything to do with the peach dessert, of course. So if you came to this page looking for the recipe, here it is: 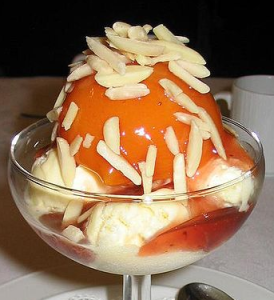