On the 1st July 1916, the Battle of the Somme was launched during World War One. By the end of that day alone 60,000 British and Empire troops had been killed or wounded. It should be remembered too, that the overall Somme campaign led to over half a million German casualties.

Among the advancing troops on the 1st July 1916 were 2,000 members of the ‘Bradford Pals’ – men drawn together as volunteers at the start of the war from the city of Bradford in Yorkshire. By the end of the day, only 230 of the 2,000 were still alive or uninjured.

In 2016 Bradford will be remembering the centenary of this slaughter with a series of events, including the exhibition of commemorative art work by local artists.

Among these will be a painting by Peter Robson, titled ‘Trenches’. Peter paints surreal images, often presenting politically-driven events, to provoke questions on the decisions and actions of those in power. He is originally from the north-east of England, but now lives in West Yorkshire. He has always painted, but worked in social and probation services, entering professional art relatively late in his life. His work has been influenced by the German Expressionist art movement.

‘Trenches’ is a water-colour painting and the artist has said of it:

I wanted with the painting of the trenches to paint an ‘everyman/woman’ painting that applied to the working class. The desolation is also a metaphor of what they came back to with the lack of any after care or indeed, psychiatric help that was in its infancy.

The painting is not meant then to be an exercise in realism or impressionism, but a subjective expression of how the artist felt about the 1914-18 war and how he responded instinctively to the subject at the time of its painting. 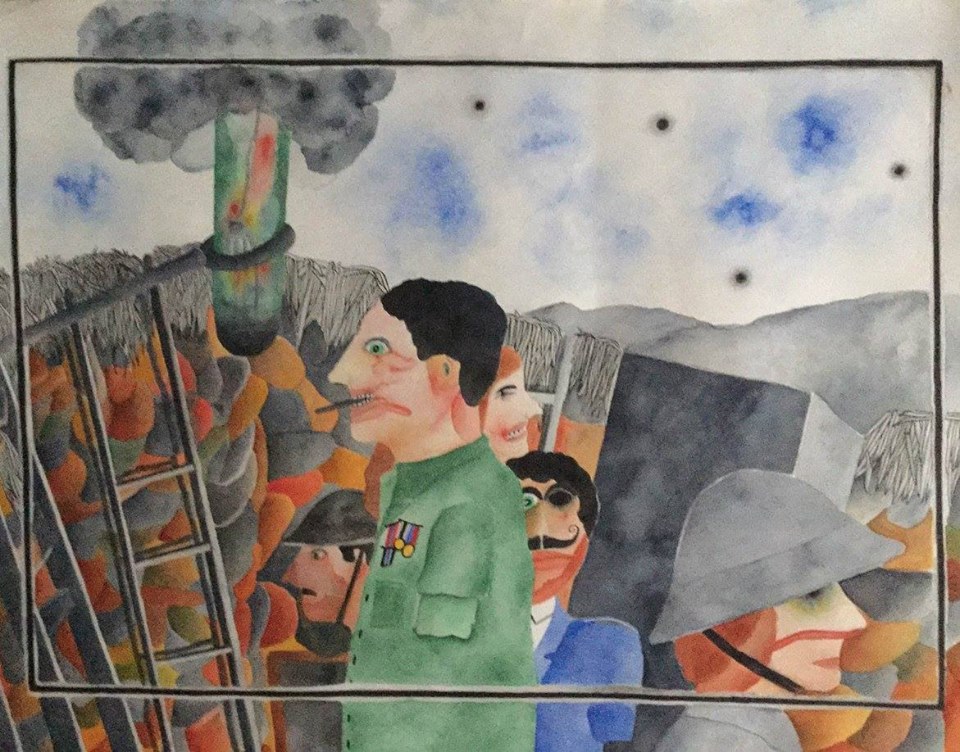 What do we see?

We see the scene through a frame – as if through the lens of a camera. We are reminded by this, that this is how we mainly see images of WW1 today: predominantly though photographs. There are now no survivors of the actual conflict, so our view is from the distance of time and the detached imagery of war. An expressionist painting can have the effect of pulling us away from the expectations of photographic images, toward a response that tap into our sub-conscious, emotions and imagination.

There are five figures, two face left, two right, and one looks directly at us. The war is thus all around the figures, inescapable. Two of the figures appear to be women, who were also drawn into the conflict, either directly (as with the woman with the helmet) or indirectly, as with the figure in profile in the background.

The figure facing us in blue is wearing civilian clothes. He is also disabled – he has lost an eye and an arm. Today we would call this ‘collateral damage’ – another linguistic way of distancing ourselves from warfare – but the figure can be seen to represent the seven million civilian deaths alone caused by the 1914-18 war; and the numbers physically or emotionally injured in this war are now beyond estimation.

The eye of the viewer is drawn to the man in the green tunic. He too is disabled. He has lost an arm and appears to be facially scarred. At first glance, he appears a stoic figure: with a cigar in his mouth, and medals on his chest. Yet his expression is traumatized, with wide eye staring into the middle distance. We are reminded that to keep a ‘stiff upper lip’ was often important, particularly to the officers in the field, and to be seen to crumble emotionally was a personal and family disaster for them. His medals are meant to symbolize the nation’s gratitude for his physical and emotional sacrifice.

We see left of centre a test tube thrust into the frame, spewing forth a black cloud. We are reminded of the gas attacks in the war, and about the terrible application of science directly to that end. A poison gas that was formulated by scientists in a laboratory designed to cause obscene injury and suffering to others and used in direct contravention of the 1899 and 1907 Hague Declaration and Conventions governing warfare.

The scene overall is brightly coloured, particularly in the sand-bagged walls of the trench. This has an effect of both drawing you into the scene and forming a tension between the unnatural gayness of the colours and the images presented. The horror behind the images is thus amplified, rather than reduced, by the vividness of colour used. It may remind us too, that often when faced with death people’s emotions are heightened to the detail – and often final beauty – of life around them.

There is certainly a place for art that presents the reality of a scene, as remembered by those that were there. But there is a place too, for art that allows for both artist and viewer interpretation. I have given you my impressions, but perhaps you see and feel other things? If you do, then Peter Robson has succeeded in his task.

You can read more Peter and view more of his work here.