Home » All entertainment » My Parisian Soundtracks 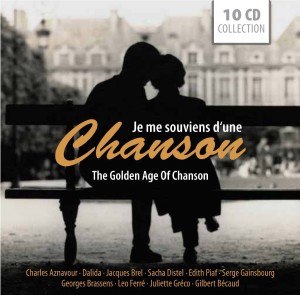 If Paris was turning out hit songs, well I certainly didn’t notice. I had my ears glued to the radio for around half a century but very few French-flavored records made it across the English Channel much less the Atlantic Ocean. Trust me I would have heard them.

In France a generation grew up on chanson – where surrealism, jazz and Gershwin met French music hall in the form of Jacques Brel, Edith Piaf and a host of passionate and brilliant artists.

Over in the UK the closest that popular music got to the chanson réaliste was filtered through Hollywood (Chevalier, Boyer, Leslie Caron et al) and faux pop translations –  Somewhere over the Sea, Feelings, If You Go Away, Seasons In The Sun, What Now My Love and The Windmills of Your Mind are just a few.

Songwriter Paul Anka bought the publication and adaptation rights to a song he heard on a trip to France. For a dollar.  The song was called Comme d’habitude; a stoic, almost bitter observation of a failing relationship . Anka re-wrote it for Frank Sinatra in a song that speaks of working hard and relying on yourself. He called it My Way and more than earned his dollar back.

On the radio? Precious little. If it wasn’t for the heavy petting anthem Je T’aime Moi Non Plus the British could have gotten through the 1960s and 1970s without singing anything more French than Michelle Ma Belle. 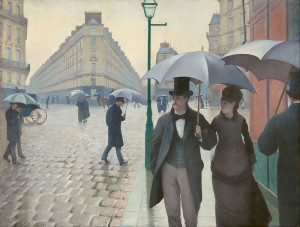 Paris Street; Rainy Day by Gustave Caillebotte 1877. Capturing the boulevards of Paris in the morning. (Poster).

I’d been working pretty long hours in London but I’d suddenly found an exciting new girlfriend. She was full of fire and energy and almost immediately were making plans to get away to Paris – to escape the London rain and get me out into the daylight to relax a little. We went the cheap way – across the channel ferry to Le Havre and into Paris St. Lazare overnight by train, arriving just as dawn was breaking.

Emerging into the light it was a genuine sensory overload. At that hour Paris is still waking up, and the cobblestones were glistening in the lights after the bouches de lavage had washed the streets. I remember sitting in the square just breathing it all in. After a while we found a cafe on the corner of Rue de Caumartin, the proprietor just setting out the terrasse tables.

I’ve been back to the city on several occasions but have yet to recreate that wonderful feeling of first arrival. I do have a ritual for travel though, especially when alone, of compiling a set of playlists (back then curated on cassette for my Walkman) or sets of albums that I’d listen to while walking the streets and visiting the galleries and buildings of this spectacular city.

It’s because of this that some pieces of music bring back the sounds and smells.

One artist that immediately made herself at home on my Paris playlists was Grace Jones. Grace was originally from Spanish Town, Jamaica but as a fashion model she took New York and Paris by storm in the 1970s. She signed a deal with Island Records and made an album of discofied show tunes, with one standout cut – a seven minute bossa nova revision of Edith Piaf’s La Vie en Rose. Her album Nightclubbing still has that whiff of Gauloises and Chanel.

A second set of songs that brings the city back was by a big French alternative star of the eighties and nineties. Mano Chau was a former busker who formed a rollocking multi-cultural band called Mano Negra. I first heard them from a listening post under the eaves of a Champs Elysee music store. Their new album was just out and the hype machine was in full swing. I didn’t need much persuading as I was already into many of the sounds that Mano Chau was channelling – The Clash, the Pogues, afrobeat). One listen I was up at the counter with my francs at the ready.

There were others scored from that very same music store that bring back the city – Happy Mondays, Massive Attack, and Suede provided the sounds for many long walks through the city, as did classical works by Satie, Schumann and Chopin.

But being a film buff I had taken along the soundtrack to Jean-Jacques Beineix’s new wave movie Diva – by Vladimir Cosma. The standout theme borrows from Satie and Debussy of course but the whole set remains a beautiful capture of late eighties cinema-du-look Paris, and Mitterand’s France.