Today is National Peanut Butter Day. While many national days may seem unimportant or pointless, surely peanut butter deserves its day in the spotlight! 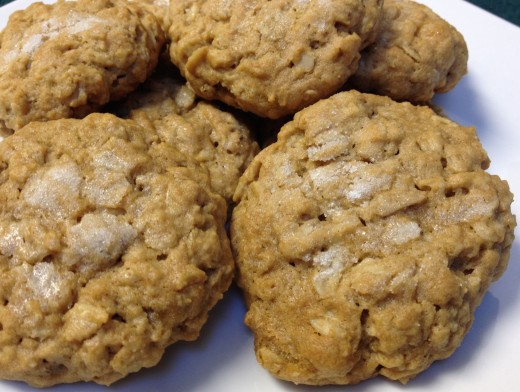 What would be more appropriate than making cookies? Our favorite version of a peanut butter cookie is a delightful combination of oatmeal and peanut butter. That actually sounds healthy, doesn’t it? This recipe won’t claim that, since sugar, flour and shortening are in the mix too, but compared to many cookies it does have nutritional value. Peanut butter is high in protein and oatmeal is recommended for heart and brain health.

It’s been our go-to recipe for several decades now, so you can be sure it is child supported and approved. Kids love these cookies!

While it was first patented in Canada by Marcellus Edson in 1884, its is known as far back as the Aztecs, who made a paste of roasted peanut. Edson first created his version from peanut flour as a nutritious for for those who had difficulty chewing. Sugar was added as a hardener.

Modern peanut butter was made in processing machines that allowed for a smoother product with added vegetable oil. Often the peanuts are boiled now rather than roasted.

High in protein, it’s been a popular choice for parents and children alike. Served in sandwiches, cookies, crackers, with vegetables and with chocolate, and let’s not forget ice cream.

Out of a sandwich, it tastes wonderful on a celery stalk or on apple slices. One of my newest discoveries is how delicious it tastes sauteed with spinach. It’s true!

You can see that recipe here.

One final and important fact; AIR (Annals of Improbably Research), a magazine filled with scientific humor, reported–in a published study no less—that “peanut butter has no effect on the rotation of the earth.” Good to know, isn’t it?