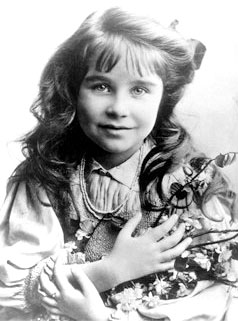 In 1987 the media uncovered what seemed to be a huge scandal. Newspapers reported that two sisters had been discovered in what they called an ‘asylum for mental defectives’ and what’s more, they were cousins of the queen, Elizabeth II.

It was said that the two women were living in the most basic conditions and that they had no visitors. It seemed that this was a case of the royal family hiding away its members and concealing the fact that there was mental instability (to say the least) in the British monarchy.

A total of five cousins locked away

Just as the public was reeling from these revelations it was discovered that three other women, from the same family, were also ‘mentally defective’ and also in the institution.

How could the royal family be so heartless? There they were, said some, living in the lap of luxury when other family members were incarcerated in institutions. Why was this covered up? What on earth was the story? Why had the royals locked members of their family away?

The truth is, they hadn’t

Anti-royal factions were having a field day. This, they said, proved that royalty should be abolished. And once again, the old chestnut ‘inbreeding’ was dragged out; because European royalty in Victorian times married people to whom they were distantly related then it was obviously inbreeding that caused five members of the royal family to be classed as insane, surely?

The five girls / women who were sent to the facility were:

You can clearly see from the family tree that this genetic malfunction was in the family of Queen Elizabeth’s mother’s brother’s wife. There was no truth in the rumour that the royal family had ‘tainted blood’ or defective genes.

The five girls were all sent to the same institution on the same day in 1941. They ranged in age as follows: Nerissa was twenty-two, Katherine was fifteen, Idonea was twenty-nine, Etheldreda was nineteen and Rosemary was twenty-seven.

As you can see, far from being ‘hidden away’ they were cared for at home until they were grown women (Katherine being the youngest at fifteen) so why was the decision made to move them to the institution? 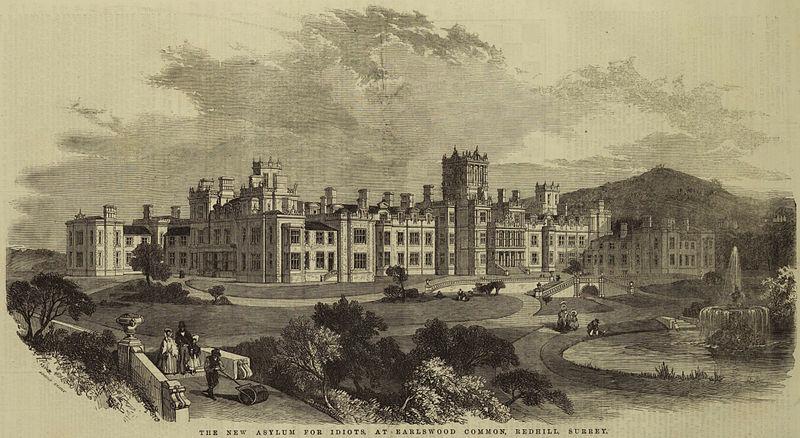 Their grandfather, Lord Clinton, had started thinking about the girls’ futures several years before. It was obvious that as their parents grew older and eventually died, other arrangements would have to be made for his granddaughters. The eldest girl was approaching thirty years old after all. All five were in good physical health and would probably live to be elderly women. But they were all said to be ‘like mischievous five-year-olds’.

And then along came the Second World War. It’s reasonable to assume that the two families had staff. Some of those staff members would have been there to care for the girls. But by 1941, male staff would have been called up to fight in the army and women encouraged to enter war work. If ever there was a time to have the girls enter an institution, this was it.

It is often said, erroneously, that the girls were sent to a state-run facility. This is not the case. The British National Health Service was not established until 1948 and the Royal Earlswood Hospital where the girls went to live was not absorbed by the NHS until 1958. Lord Clinton paid for the girls’ care.

Really, there was bound to be a conspiracy theory. Sometimes these theories can be fun but this one is completely bonkers.

Katherine Bowes-Lyon (pictured) was born in the same year as the queen – 1926. The conspiracy theorists say that the queen’s parents realised that she was ‘mentally defective’ and that when Katherine, who was born ten weeks later, arrived on the scene the two babies were swapped.

They claim that it is actually Katherine Bowes-Lyon who is on the throne today and that the real queen was the one who spent her life in the asylum. (Katherine died in 2014).

This crazy theory goes no way towards explaining a) how anyone could possibly know that a tiny baby was ‘mentally defective’ or b) how the Bowes-Lyon parents could have been induced to agree to the swap.

Criticism of the queen

When the story of the five girls was revealed in 1987, journalists frantically contacted Buckingham Palace to get a statement from the queen about her cousins, Nerissa and Katherine. A spokesman said ‘It is a matter for the Bowes-Lyon family’. Which of course, it was. Take another look at the family tree.

But as recently as 2011, the story reared its head again when a television documentary was made about the five Bowes-Lyon girls. A new generation of people was outraged by the situation as the documentary strongly suggested that the girls had been treated callously by the royal family.

To quote just one example, the documentary claimed that the father of Katherine and Nerissa never once visited them in the care home. This is true but it’s hardly surprising as the girls entered the facility in 1941 and their father had died in 1930.

The documentary also claimed that the women received no visitors, cards or gifts. The daughter of their sister Anne (born 1917) says that this is completely untrue. Anne, who married and became Princess Anne of Denmark, often visited Katherine and Nerissa and took and sent them gifts. They had no idea who she was. The girls’ mother, Fenella, was the only visitor they recognised and she visited regularly until her death in 1966. At first, other family members would visit too but because the girls didn’t recognise them, staff diplomatically suggested that their visits were disruptive.

Mentally, the women were young children. They could not speak. They did not have any understanding of concepts such as family relationships.When Nerissa died in 1986, her sister Katherine was apparently quiet for a couple of days and then back to her usual self. Yet the sisters had been together night and day for their entire lives. They had no understanding of concepts such as death, family, visitors and gifts.

Whenever the royal family is criticised the phrase “they are a waste of the taxpayers’ money” is bandied about by those who wish to be rid of the monarchy. Yet today, the royal family is self-supporting. (Royal writer Penny  Junor estimated that the cost to the taxpayer is 15 pence per person per year). But the queen was criticised for not ‘providing’ for her cousins – and their cousins. (In 1987 when the story broke, Katherine, Etheldreda and Idonea were still alive. Bear in mind that Katherine was a cousin of the queen, the other two were not).

It was a lose-lose situation. 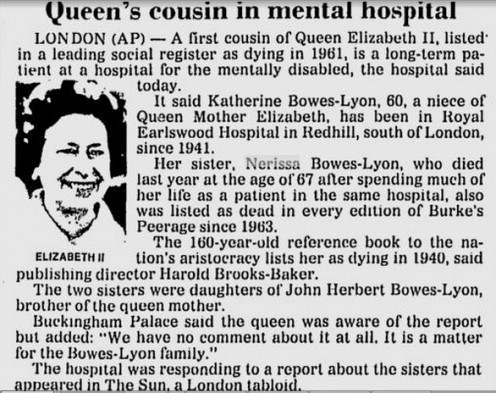