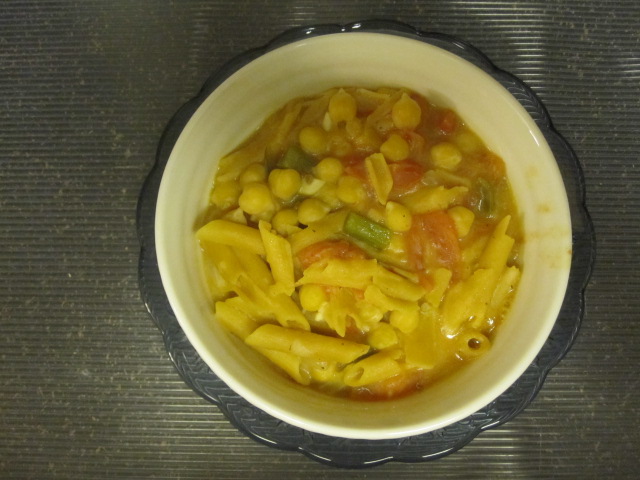 My dietary needs have changed drastically, underscoring the need for focus on a more aggressive change. I recently discovered the superfood, quinoa. The most important package it brings to the nutrition table is a complete protein. This grain/seed is so impressive, I wrote about it in Jaquo article, Quinoa: Impressive.

Though my dietary changes are built on the Mediterrean diet model, I couple it with his book, The Quinoa Cookbook, you’ll find many delicious recipes for cooking with quinoa. I modify recipes where I can to include a lower glycemic index and fewer simple carbohydrates in meal.

Chatham’s book, The Mediterranean Cookbook, provides the model on which I make ongoing changes to my diet. It’s a guideline which largely influences what appears on my table. The journey to healthier eating has been a long one, but I’m almost there – almost.

In a recent foray into the kitchen, I made something I call Easy Quinoa Pasta Dish, I used Ancient Harvest’s(AH) Quinoa Penne Pasta. Ancient Harvest offers a selection of quinoa blend pastas, supergrain pastas and pasta made from a blend of quinoa and beans or lentils.

Their pastas are made with ancient grains and are safe for vegetarians and flexitarians, people with celiac disease, some diabetics and individuals with gluten sensitivity.

Ancient Harvest has been around since 1983. They were the first company to bring quinoa to the United States. Their products are gluten- and GMO free as well as organic. Ancient Harvest’s supergrain spaghetti was voted best gluten free pasta in 2014 by Bon Appétit Magazine. Their pastas can be used in place of regular pasta.

The penne pasta I used in the dish mentioned above has one gram of carbohydrates from sugar and fourteen grams of protein. The serving size is 56 grams. The nutritional information for some of their pastas is found on their website.