R101: The disaster that ended the British airship programme 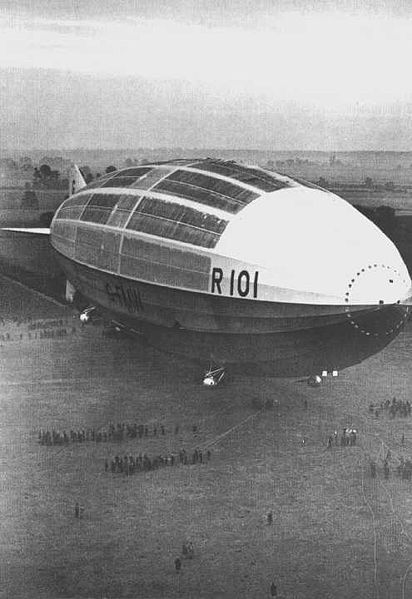 After the First World War, it was clear to see that despite Germany’s losses, one of their strengths had been the dirigible or airship.

Their Zeppelins, virtually silent monsters, had been able to fly unseen over British land and drop bombs in places which were otherwise inaccessible.

This technology was embraced by other countries.

Air travel had many advantages but in the post war period, aeroplanes were draughty, rattly and noisy. They couldn’t carry many people or a great deal of luggage. Airships were seen as being far preferable.

Passengers could travel in luxury and the name airship was apt – travelling on one of these was rather like being aboard a liner.

Because the British ruled countries in far flung areas of the world,it was deemed that airships would be built – two of them- to make travel between sovereign lands more easy.

Thus the R100 and the R101 were built – the latter under government control. It was designed to be the largest airship ever. (Doesn’t that remind you of the Titanic?)

The airship was basically a cigar-shaped balloon. Whereas previously, passengers had been carried in gondolas rather hung beneath the balloon, on the R101, the passengers were actually inside it – in luxury accommodation.

The gas used to float the construction was hydrogen.

Preliminary testing didn’t go well. Several problems were discovered with the R101.It was intended that the airship was to travel regularly to India and back (a journey that would take about six days) so eventually the craft was made even longer. It was almost eight hundred feet long. But as a consequence of the delays and extra construction work, the airship was over-budget and badly overdue.

It was decided that the inaugural flight could be delayed no longer.

In October 1930, the airship prepared to travel to India. With the crew and several dignitaries aboard,the airship left for France. It circled over London giving the population the opportunity of seeing this technological wonder.

In the early hours of the following morning, the airship went into a dive but recovered. What the occupants didn’t know what that part of the casing on the top of the craft has become loose. The captain slowed the ship and it seemed that they would have to land as soon as possible – probably under crash conditions.

The ship floated relatively gently to the ground, the nose hitting first. This should have been fine but a spark was created by the impact and the flammable hydrogen caused flames to engulf the airship. All but a handful of the occupants were killed instantly.

When officials arrived on the scene the following day, the ground around the wreckage was still burning.