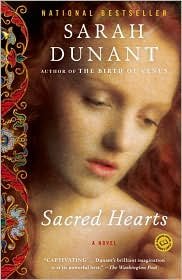 ‘Sacred Hearts’ is a novel set in the Benedictine convent of Santa Caterina, Ferrara, in mid 16th century Italy at the time of the Reformation. At that time young women were either sent, willingly or unwillingly, to convents, who required a dowry for their entry to the religious order.

The admittance of these young women into nunneries often solved a problem for families: of what to do with a single woman unwilling or unable to find a marriage partner, or left alone after the death of one or both parents. Also, many parents may only have been able to afford to pay a large marriage dowry for the most eligible of their daughters, which left no alternative for the others – they become ‘brides of God’.

It is also a time of great turbulence within the Catholic Church; the Reformation had forced the pace of change, including the Church’s draconian response to Protestant criticisms of worldliness, materialism – and even promiscuity – among priests and nuns. By the end of the 16th century convents had become almost like living tombs for the nuns, walled up and denied contact with anyone outside of the nunnery.

In 1570, however, the convent of Santa Caterina is a holy place, dedicated to prayer and the worship of God, yet ruled with a degree of tolerance and liberalism by the abbess, Chiara. The nuns are allowed worldly possessions, allowed to meet their relatives within the convent on occasions, to sing within the church to the lay congregation, and perform plays to invited female guests.

Into this environment comes a 16 year old novice, Serafina, sent by her family to the convent because of her singing ability – and the family’s desire to gain favour with the Church with its dowry and gain business influence in the town of Ferrara.

Serafina – in love with a young man – is enraged by her incarceration and furiously resists attempts to persuade her to accept her fate. The humane and gifted sister in charge of the convent infirmary, Zuana, befriends the girl, who, ostensibly begins to settle into convent life. But her deviousness, in her efforts to escape, begins to have a disturbing effect on the community.

Factions among the nuns, widened by the religious zealotry of the mistress of novices, Umiliana, begin to form and threaten the harmony of the convent and authority of the abbess.

The central plot revolves around the impact of Serafina on the community and her desire for freedom, but the interesting feature of the novel is in relation to the quiet battles for dominance, influence and power among the nuns. The worldly abbess, Chiara, skilfully manages the different factions with an adroitness that would be the envy of any CEO today. Her word is sacrosanct, yet it is increasingly challenged by Umiliana, who would like to see the convent become more fiercely religious, and less open to the influences of the outside world.

The challenges to the abbess can be seen as a metaphor for the forces of oppression and religious bigotry and fanaticism in the world beyond the convent gates. For example, when a crucifix falls from a wall during a service, the abbess seeks and finds logical explanations, whilst Umiliana and her followers argue that it a ‘sign’ from God and that the community needs to become more devote and more insular.

The herbal practices, wisdom and pragmatism of the infirmary sister, Zuana, can be seen too, as representative of the scientific, logical world of reason, versus an attitude that sees illness as a manifestation of God, with the cure in His hands, rather than in the realm of medicine.

At the close of the novel there is a devious resolution and action that tips the balance of power in favour of the abbess – but we are reminded of the restraining changes blowing inevitably toward the convent from Rome.

This is an engaging novel, with parallels today between the religious fanaticism found in all religions, versus more moderate voices of compromise, toleration and negotiation. The characters are all finely drawn, and the twisting, subtle plot held my attention throughout. The claustrophobic world of the convent – with all its subtle variations in the religious devotion and zeal of individual nuns – is explored in some depth. 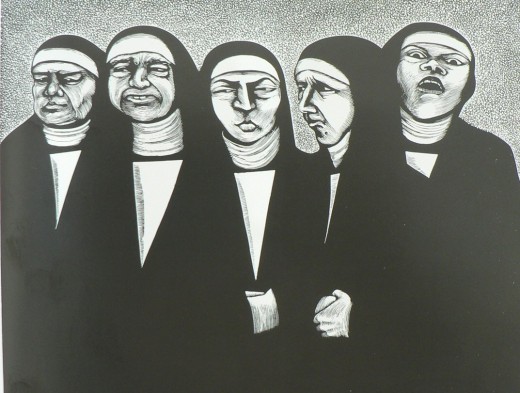 Sarah Dunant’s novel catches all the tension, politics and religious fervour of life in a 16th century Italian convent at the time of the Reformation.