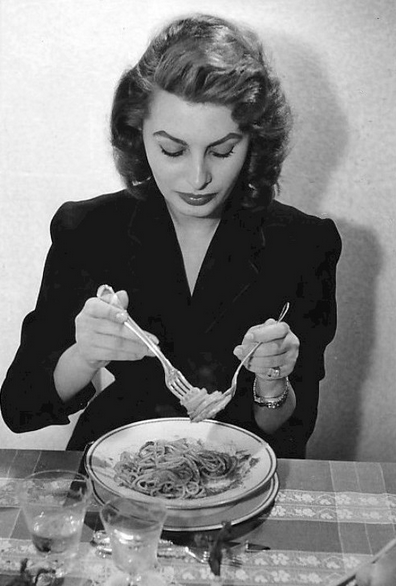 Actress Sophia Loren admits freely that she loves food. Indeed,she attributed her looks to the plentiful consumption of pasta. If only…

It is true though that a Mediterranean style diet is highly recommended for health and Sophia Loren does seem to be the proof of the pudding.

She has what you would call a healthy appetite. In her autobiography she tells a story of an event that took place in 1957. For the holidays she and her husband,Carlo Ponti, rented a home in the mountains of Bürgenstock, Switzerland.

Their neighbours were Audrey Hepburn and Mel Ferrer who had married there  couple of years earlier. The two couple were friendly in  low-key, non-intrusive way as all four of them enjoyed the peace of the mountains, walking and appreciating the scenery.

One day, when Mel was away working, Audrey invited Sophia and Carlo to lunch.

They were given a tour of the beautiful house by Audrey then sat at an immaculately and extravagantly set table.The appetiser arrived.  It was a lettuce leaf with a curl of fresh cheese and  drop of delicious raspberry compote. There was also a bite-sized bread roll.

Sophia says that the conversation was pleasant and the appetiser even more so but when the maid arrived to clear the dishes, Audrey got up from the table. It hadn’t been an appetiser – that had been lunch.

Sophia says that she couldn’t wait to get home to make herself  plate of sandwiches.

Omar Sharif and the battle of the eggplants

In 1967, Sophia was on location with Omar Sharif. They were on location in Italy making The Fall of the Roman Empire. Every day, the production company supplied the actors and crew with a brown bag lunch. They were horrible. Omar looked at Sophia and said that he wished he was eating his mother’s eggplant dish instead. Sophia told him that her mother’s eggplant dish was absolutely the best in the world.

They bantered until Omr telephoned his mother, who was in Egypt, and without telling her why, suggested that she go to Rome to visit him on the set. He showed her round, took her to see the sights and introduced her to his friends.Eventually he said “Next week, we’re having dinner with Sophia and some members of the crew. How about cooking eggplant?’

Sophia’s mother was also asked, unknown to Mrs Sharif, to prepare her own eggplant parmesan. The jury had a hard time when it came to judging which they preferred. But Mrs Sharif won by a small margin. Sophia’s mother didn’t mind though, because the mothers of the two movie stars had become firm friends.

She said “All we do is talk about the two of you. Because every star in a beauty in their mother’s eyes”.

Sophia concludes the story by saying:

Food makes people happy,  it takes you back home, it says so much that words cannot say.