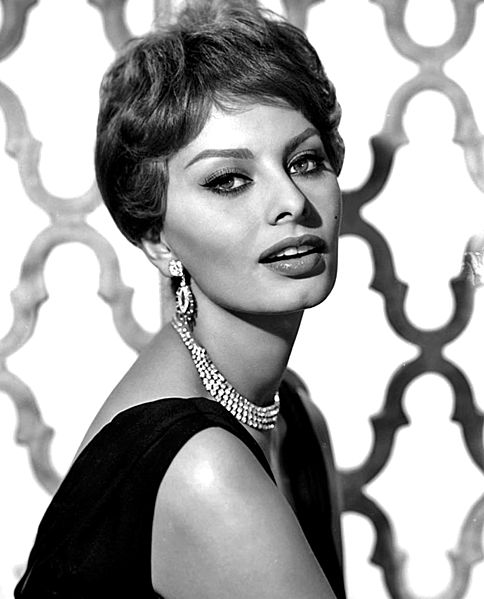 The gorgeous Sophia Loren met Carlo Ponti, the man who was to become her husband, when she was seventeen and he was thirty nine. That was in September, 1951.

She was at his bedside when he died aged ninety four in 2007.

But Carlo was a married man when the couple met and by the time Sophia made her first film with Cary Grant, in 1957, he was still married and it wasn’t certain where their relationship was going to go. Carlo was a huge part of her life but…

As Miss Loren says herself ‘who wouldn’t be bowled over by Cary Grant?’

They were working together in Spain on the set of The Pride and the Passion for six months.

The other star of the film was Frank Sinatra. Sophia explains that he was wonderful, lively and fun despite the fact that his own relationship with Ava Gardner was causing him distress.

Sophia’s command of the English language was still a little shaky and Sinatra would teach her obscenities, assuring her that they were  acceptable, indeed elegant, phrases.

She thought Sinatra was charming generous and genuine but she really hit it off with Cary Grant. She was astonished when he asked her to dinner, not believing that he could see anything interesting about her.

She was twenty two and he was fifty two; thirty years older.

They started seeing each other a lot. But just as Sophia was heavily involved with Carlo, Cary was married to his third wife, Betsy Drake. She was sometimes a visitor to the film set, but they relationship between the married couple was shaky.

“Nonetheless, both of us realised that the feeling between us was beginning to be laced with love and, for different reasons, we were scared.”

They were working hard but enjoying life.Cary Grant had bought a red MG and they would drive to small restaurants in the hills in the evenings, drink local wine and listen to flamenco music.

But eventually they reached a turning point. The movie was completed and it was time to return to real life. Sophia related that she knew that she wanted her future to be with Carlo  but he was still married and showing every sign of remaining so. Also, she didn’t want to move to the United States.On the other hand, Cary Grant was hard to resist.

On the final night, he asked her to marry him.He said that he would give up everything he had. He said he would move to Europe to be with her. Sophia had no idea what to say or what she wanted to do. She asked for time. With typical Grant humour, he suggested:

“Why don’t we get married now and think about it later?”

But it was no good. Sophia eventually married Carlo, Cary found happiness with a new wife and the two of them remained friends. But when Sophia Loren wrote her autobiography, it shows photographs of the letter and its envelope that Cary had written to her after the night they parted.

“Forgive me my dear girl – I press you too much. Pray – and so will I. Until next week, goodbye Sophia,
Cary”

They didn’t see each other the following week. But Sophia kept the letter and its envelope which read:

“With only happy thoughts.”