Spotlight on “Candidate For Murder,” by Lauren Carr

Home » All books » Spotlight on “Candidate For Murder,” by Lauren Carr

Lauren Carr is back this month with her twelfth entry to the Mac Faraday series. Candidate For Murder is sure to be another bestseller for the popular author. All the more so because it features Gnarly. Who would have thought he might run for office. I’d vote for him in a minute.

Ms. Carr is currently on a virtual book tour with iRead Book Tours. From June 20th through July 29th, she will be around and about with doing interviews, sharing articles and more about Candidate for Murder and her other upcoming releases. We’ve included the full schedule below to make it easy for you to stop by other sites to learn more about this lovely author and her books. 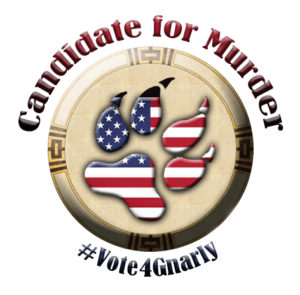 It’s election time in Spencer, Maryland, and the race for mayor is not a pretty one. In recent years, the small resort town has become divided between the local year-round residents who have enjoyed their rural way of life and the city dwellers moving into their mansions, taking over the town council, and proceeding to turn Deep Creek Lake into a closed gate community—complete with a host of regulations for everything from speed limits to clothes lines. June 27 – The Travelogue of a Book Addict– book spotlight / giveaway