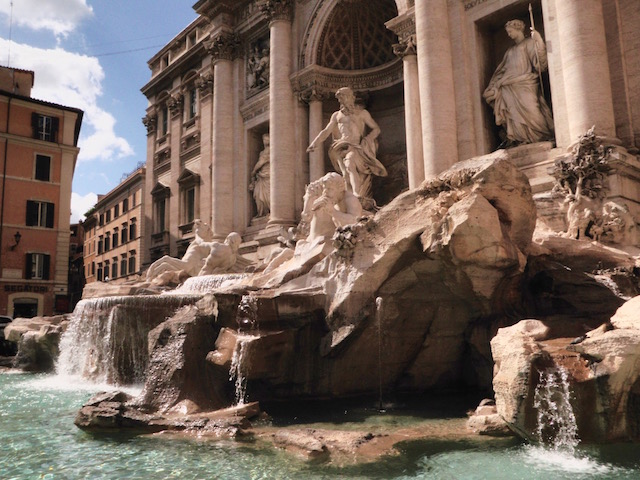 This article is the second part of three. Its main focus: Trevi Fountain & The Colosseum.

Just standing in the very place where the mighty Roman Empire began is an incredible buzz and actually being in Rome really does bring home what the Romans achieved and just how much they lost.

As if that wasn’t enough, there’s also the amazing Renaissance-era there too! The centre of the city is crammed with infamous things to see; fantastic squares, cathedrals, the Pantheon (see part 3 of this article), Piaza Navona, Campo dei Fiori, Spanish Steps and more!

I recommend some really good guidebooks later on.

Legend has it that if you throw a coin into the Trevi Fountain (over your left shoulder) you can be assured of returning. So relax, think about what you really want to do and leave the rest for next time. That’s what we did.

This is the largest and most beautiful Baroque fountain in the world! It is almost 300 years old and built almost entirely of travertine stone. It has just undergone a €2 million makeover and is waiting to show off even more eagerly than before! 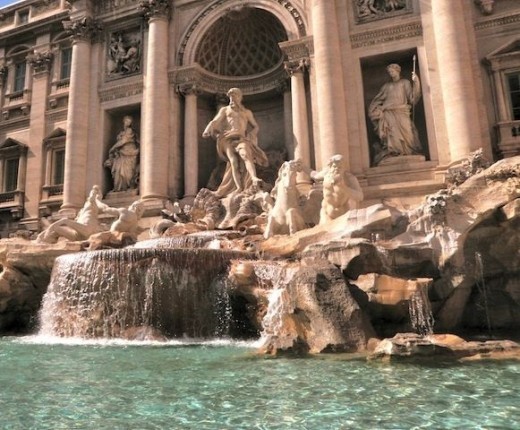 My heart skipped a beat just like hers did when I first saw the Trevi Fountain and my son gasped because it is so big and the fountain is in a tiny piazza! It is really is breathtakingly romantic. It’s fun to search it out because it is hidden among tiny alleys, of the Trevi district (where you’ll find truly delicious Pizza and Aranchini!).

However, it is crowded with tourists. That sounds awful doesn’t it? It wasn’t. It’s a strange thing – the tourists were sitting or standing quietly listening to the sound of the fountain, eating lapfuls of pizza and taking thousands of selfies! The atmosphere was calm – a bit like being in a church! 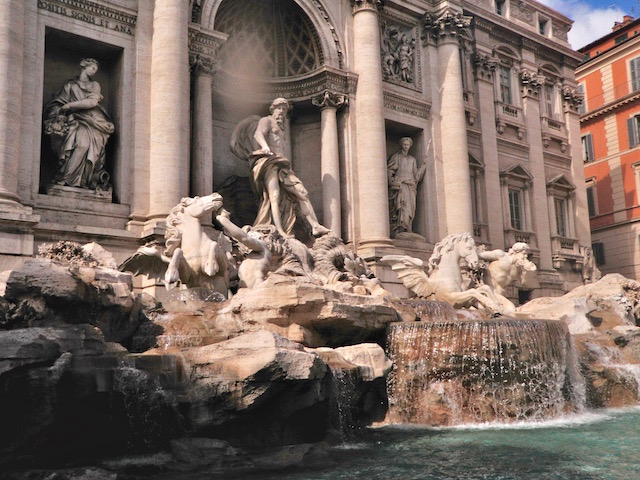 It gets very hot in Rome during the summer months and tourists think it’s OK to freshen up in the water of the world famous historic fountains! This is illegal – so whatever you don’t get into the water the way Sylvia does in the film! You’ll be stuck with an immediate fine of several hundred Euros.

Fountains like the Trevi, or the stunningly beautiful Fontana dei Quattro Fiumi in Piazza Navona, are masterpieces and part of the world’s historic heritage. This has been law since 1999 and Italian police will not tolerate it being breached. 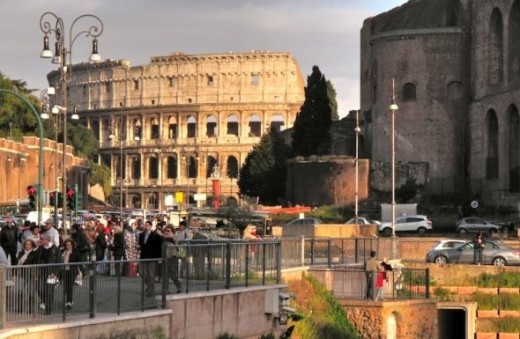 A transcript of a recording I made while we were in the Colosseum:

“We’re right in the centre of Historic Rome and it is very, very impressive! The Colosseum is absolutely huge, a bit like being inside a modern football stadium. You can easily imagine, 50 or 60 000 people in here enjoying the ‘spectacle’.

Seeing is believing – as the detail is incredible, like the underground doors and chambers, and the hydraulic systems for lifting up the animals into the arena, and the trap doors they used to get the lions and bears in front of the audience.

There are lots of interesting descriptions everywhere, which is great because you can easily learn and understand what went on here.

For example, in the morning they hunted the animals, made them run etc, and for light entertainment at lunchtime they threw them a few naked criminals to eat! The crowds loved it. What’s even more incredible perhaps is that as this carnage was going on so too were jugglers and dances and music – imagine a real circus atmosphere!

In the afternoon they had the gladiatorial combats, which were as gruesome as you may have heard! This gory ‘festival’ sometimes went on for as many as 100 days. About 9000 animals were killed and the blood of the men and animals was soaked up by sand, in fact, the Latin word for ‘sand’ is where we get our word for ‘arena’.

While we were walking round, there was a sudden roar of a crowd. It was people protesting over job cuts and austerity laws in Italy, but the sound gave us the shivers, because it was just like a crowd jeering at a criminal’s cowardice as he desperately tried to escape a hungry wild beast!

This place must have been quite something! 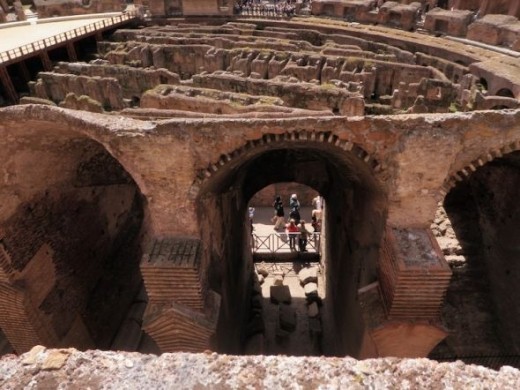 This recording or our photos don’t do this amazing place justice. I can’t say that this place is romantic you can almost taste the bloodshed that went on. It’s quite unnerving. 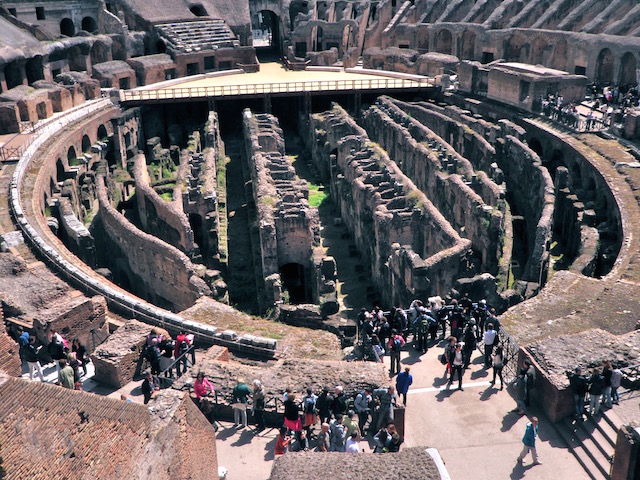 The Coliseum is busy, but there’s plenty of room so you can walk around and see everything quite easily. There are lots of guides offering tours but they’re not obtrusive and you do get plenty of time to stand and watch and just soak it all up. We stayed for about 4 hours and left very reluctantly.

Do not miss the Colosseum whatever you do!

If you’re looking for a holiday in Italy that includes Rome then check out Intrepid Travel. Click on the image below:

Here’s a link to Part 1 of this article: The Vatican and The Monument for the Fallen