A walk to the Puddle Stones. 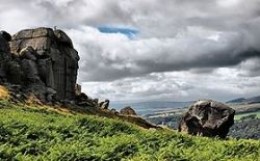 I live close to Ilkley Moor, a large and untamed upland dominating the West Yorkshire and South Pennines landscape. Ancient man carved symbols into the rocks – and in the last two years more carvings have appeared.

But this time Bronze and Iron Age symbols have been replaced by modern poetry. Seven poems: the Stanza Stones, written by Yorkshire Poem, Simon Armitage, have been carved into rock: three on Ilkley Moor and the remainder in neighbouring regions of West Yorkshire

These poems in stone are a modern-day British folly; an eccentricity of the nicest – or daftest kind – depending on your viewpoint. You make your own mind up.

Let me tell you more about this project to celebrate the literary heritage of Yorkshire – including vociferous protests about it – and about my walk, one hot July day in 2013, to one of them: The Puddle Stones. 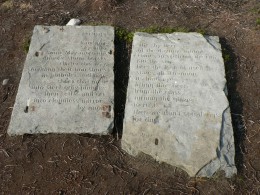 There were no puddles today. The week had been unusually hot and the ground around the stones was baked hard; the grey earth cracking into dry furrows, like the face of an old man. But it was not hard to imagine the same scene in winter. Then the water would cascade off the surrounding rocks to lie, black and shining like treacle, on the saturated ground.

The walk to the ‘Puddle Stones’ from the car park is along the spine of Ilkley Moor on a paved path, once a drovers’ trail. Step from the path and you feel immediately vulnerable, as if you are stepping into unknown alien territory. The moor is rutted, broken; tufts of cottongrass grow thick, white and wide, and here the bilberries spread unmolested, unpicked.

The land falls steeply on both sides, down to the rivers Wharfe and Aire. On the horizon the white domes of the Menwith Hill early warning station seemed like sinister gigantic golf balls half-buried into the far hillside.

After half a mile, a cluster of huge rocks appear – the Thimble Stones – and a short distance beyond these another smaller rocky outcrop guards the two Puddle Stones, laying side by side, like ancient tombstones. There was no one else there, nor in any direction from me.

The poem is split into two, a stanza carved on each:

in potholes and ruts,

then settle and set

of the daytime moon

comes to sip from the rim

likes the look of itself,

Then we don’t see things for dust.

The poem was written by Yorkshire poet, Simon Armitage, and carved – ten minutes chisel time for each letter – by stone artist, Pip Hall, to coincide with the staging of 2012 Olympics in Britain and to celebrate the literary heritage of the region. The project was funded by a grant from Europe and sponsored by the Ilkley Literature Festival.

There are six stone poems in total, each quietly located on moorside around the region; each poem features an abundant natural element in Yorkshire: water. A seventh stone poem has been placed in a yet undiscovered lonely location.

Simon Armitage said of this one before me: “I thought we should spare a moment for the humble puddle. It’s the runt of the whole rain family, but there is a place in my heart for the puddle.” 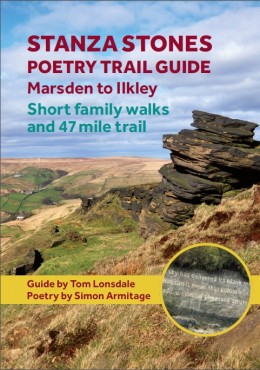 In 2010 the well-established and prestigious literary festival in the moorside town of Ilkley, Yorkshire decided they wanted to commemorate the cultural and literary heritage of Yorkshire and celebrate the 2012 London Olympics.

They applied for European funding via British government to create a series of poems on themes connected to the Yorkshire countryside. Simon Armitage was commissioned to write the poetry and Pip Hall, and her apprentice, to carve the poems.

Some of the stones were carved away from the moors and placed in position, but others were carved on rocks in situ; one in a middle of a beck on Ilkley Moor.

A drystone wall craftsman, Nick Ferguson, created poetry seats in some of the locations and in one of the more accessible locations, there would be an opportunity for walkers to write their own poetry and ‘post’ it in a nearby box, to be included in Stanza Stones anthology, available as a download from the literary festival website (see below).

The Puddle Stones find a home 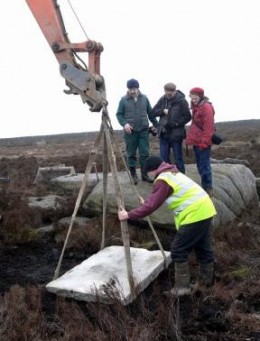 Pip Hall supervises the laying of The Puddle Stones, 2012. 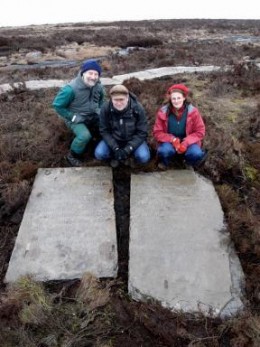 The two stanzas of the Puddle Stones are laid in position on Ilkley Moor a few metres away from the path.

The view from the Puddle Stones 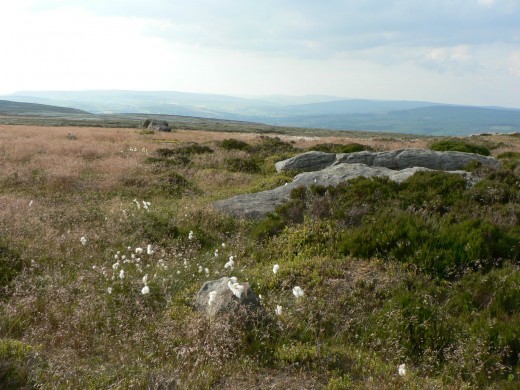 Find out more about Pip Hall, the stone artist who carved the Stanza Stones poems.

Pip Hall carving one of the Stanza Stones 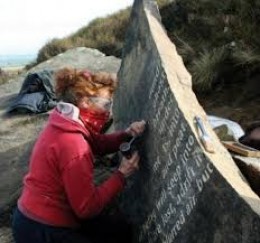 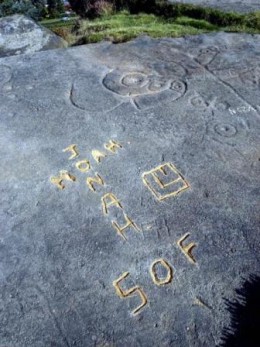 A citizen of the 21st century marks his or her mark (above) alongside the work of a a Bronze Age ‘vandal’. 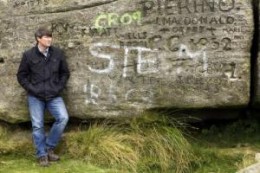 The carving of the Stanza Stones poems into the millstone rock of the moor is a modern continuity of an ancient practice. There are over 200 Bronze Age ‘cup and ring’ rock carvings scattered across the moor, plus other evidence that the moors were widely populated at that time.

But with easy public access to the moors, visitors over the last 100 or so years have also carved and, more recently, sprayed their names or signatures on rocks close to roadways at the lower levels of the moor. Simon Armitage, the poet, was conscious of the ancient and modern history of marking human presence on the moors. He wrote:

“For many thousands of years people have been coming to moors around West Yorkshire to offer their prayers and express their desires in the form of carved stones. The Stanza Stones poems are my contribution to that unbroken and ongoing dialogue…”

Soon after Ilkley Literary Festival announced that they had secured European funding for the project, and had permission from the local authority to undertake the carving, protests sprung up from a environmental group, led by a local Druid, the ‘Guardians of Ilkley Moor’, protesting that the Â£130,000 project be cancelled and that the moor should be left alone.

They had three main objections.

First, that there had been limited public consultation about the project, and that the powerful Literary Festival had tended to push the idea to the exclusion of objections to the contrary.

Second, that these poems were another unnecessary man-made intrusion of into an area of special scientific and historic interest that was best left alone.

And third – perhaps their strongest objection – that the poems would encourage vandalism from people who might point to the stones as justification for their own bid for posterity through spraying or chiselling their names into rocks .

Simon Armitage seems well aware of the controversy the project had caused by posing next to modern graffiti sprayed onto rocks at Ilkley Moor (see photo in this lens).

My own view is, however, that these poems will gradually blend into the landscape, giving pause, interest and reflection to walkers who take the trouble to find them, or stumble across them. They are unlikely to attract any more vandalism then might be expected in a place like Ilkley Moor, and will give pleasure in an unassuming and harmless way.

The people who spray or chisel their names into rocks are unlikely to have even heard of the Stanza Stones, let alone be encouraged in their vandalism by them.

But what do you think? I would welcome your opinions. Can I suggest you look at the short BBC report (see link immediately below) that gives both sides of the argument and then vote below. You could, if you wish, leave a more detail response in the ‘Comments’ section. Thanks.