Home » All style » Looking at Paintings (8) ‘Tell Your Fortune, Lady’

Over 70 years after it was painted, ‘Tell Your Fortune, Lady, still has the power to stop me in my tracks. 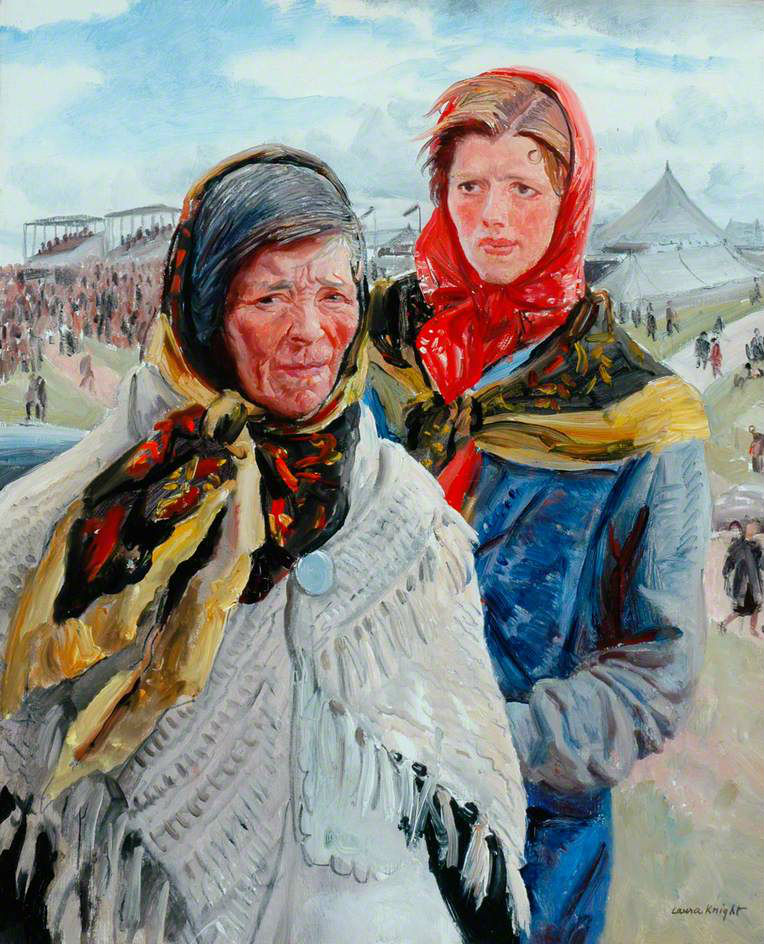 Laura grew up in Nottingham where her strong-minded mother gave art classes to support her children. Laura showed early talent and in 1884 began to attend art classes at Nottingham Art School, where she met Harold Knight, a teacher at the School, and who she later married in 1903.

Along with Harold Knight, she was a leading member of the Staithes Group of Artists on the Yorkshire coast, before they moved in 1908 to Newlyn, Cornwall to join the art colony there, known as the Newlyn School. She specialised in scenes of everyday life, often painted outdoors, and was particularly attracted to paint characters she found in the circus, ballet, and theatre, as well as among the gypsies; their flamboyance mirrored her own larger than life personality.

The excellence and accessibility of her art work, combined with her talent for business and self-promotion, made her popular with the public and she was made a Dame (Commander of the Order of the British Empire) in 1929.

This painting, 30 by 25 inches, was first exhibited in 1939 at the Royal Academy in London, but is now in the permanent collection of Bradford Museums and Galleries, and can usually be found on public display at Cliffe Castle, Keighley, West Yorkshire.

It depicts two women looking to their right and intent on something beyond the artist, outside the frame. In the background, a race grandstand and tents can be seen. The women are viewed slightly from below; we know that Laura Knight would often sketch and paint whilst seated in the open doorway of a friend’s ancient Rolls Royce car whilst her subjects posed outside.

The traditional style and colours of their clothes, as well as the title of the work, suggest the women are gypsies. The interesting feature of the painting is with the age differences, dress, and expressions of the women, as well as the boldness of its colour.

The women’s features are similar, so they may be mother and daughter. It is an interesting study of age and ageing, with the effects of an outdoor life showing in the faces of both women.

The older woman’s face is weather-beaten, her hair greying, her eyes narrowing; whilst the younger woman’s face is still fresh, red and unlined. Their expressions are guarded and wary; the title of the painting may suggest they are looking for female race-goers to approach. However, the title may also portend the fate of the younger woman, as age takes its toll on her looks.

The colours are bold and vivid, and the brush-strokes are both broad, as with the white shawl, and fine, as seen in the detail of the older woman’s face.

There is horizontal left and downward cascading composition . This starts with the roadway sloping down from the top right of the picture, is emphasized by the elevated positioning of the younger woman, and followed through with the flow of the women’s scarves, slope of the older woman’s hair, and their joint eye directions.

The painting captures too, a sense of place, period and people swallowed now by the fortunes of time.