The British Lion by Tony Schumacher

Home » All books » The British Lion by Tony Schumacher

One of the latest books to arrive on the review desk at JAQUO HQ is, without doubt, a can’t-put-it-down historical novel with a twist. Several twists. 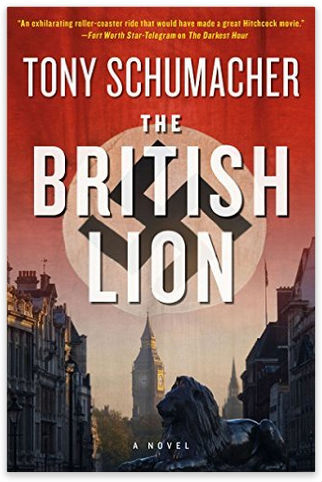 Along with many other readers, I find that the ‘what-if’ novels of the twenty first century can provide rollicking good stories along with a generous dose of thought provoking  ideas along the way.

Mr Schumacher has certainly provided us with these and more.

What if Germany had won the Second World War?

Yes, the book is set in England just after the end of the war and the country is under German control.  And there are several factions all working towards their own ends. The British authorities are having to work with their conquerors as they try to establish the Hitler regime in Great Britain.

Within this chaos, young German officer Ernst Koehler is enjoying the luxury of seeing his family. This wife Lotte and daughter Anja are visiting from Germany. One day, Anja and her mother go on a simple shopping trip but are attacked and kidnapped by two American spies who need them as hostages in order to blackmail Koehler to do their bidding.

Meanwhile, John Rossett, a British police detective who has worked closely with Koehler since the occupation, is recovering from injuries brought about by his own escapades – although he soon becomes embroiled in the complex situation the German officer is now in. This involves the British resistance, the Nazis and the American embassy in an unknown and violent England where no-one knows who to trust.

With the ousted king and the former British government exiled in Canada, Edward VIII on the throne and Oswald Mosley now prime minister, England has become a place where Jews with yellow stars on their clothing are being loaded onto transport trains,  travel is impossible without permits and gun battles rage in the streets. No-one is safe and no-one is to be trusted.

In the turmoil of this new Britain, Koehler turns to the best man he knows who can save his daughter — John Rossett. Rossett discovers that there is more at stake that just the Koehler family. In order save Anja Koehler, Rossett has to find and deliver a Jewish scientist, Ruth, whose life has been spared by the Germans – so far – because of her brilliant mind and her knowledge of how to create the ultimate weapon; a weapon that could mean the end of mankind.

In this post war England, the Americans favour the German regime but the US London Embassy – headed by Joe Kennedy – has its own factions to contend with. The British police and the SS work together – but do they trust each other? Do the British trust each other? Who can anyone trust?

Anja Koehler is only thirteen but she manages to escape from the Americans who have kidnapped her. Yet she falls into the hands of another gang. Why is she so valuable and who can she trust?

This fabulous book was published on October 27th, 2015 and can be ordered at at Amazon