‘Child in Me’: Short Stories of Childhood

Home » All books » ‘Child in Me’: Short Stories of Childhood

The Realm of Childhood. 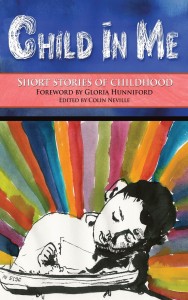 The realm of childhood can be a place of insecurity, uncertainty, as well as love, trust and boundless optimism for the future. Childhood too, has its own power; a power that children can quickly recognise and exploit.

The anthology of 16 short stories, ‘Child in Me’, written for an adult readership, reflects a kaleidoscope of childhood experiences, as remembered by the fictionalised adults or children within the stories.

Eleven authors have contributed stories, with all royalties from sales going directly to support the work of the UK Grandparents’ Association, a charity that offers advice and support to grandparents in the care and welfare of grandchildren, a staggering number of whom – estimated to be 200,000 – are, for a range of reasons, in the sole care of grandparents in Britain.

The authors are members of two online writing communities: Write Words and Authonomy and around half the stories have been previously published in magazines or online. One of the writers, Julie Balloo, is a well-known British comedy, radio and theatre scriptwriter and two of the stories, Fish Supper, and Justice were first- prize winning entries in UK Writers’ Forum short story competitions. Three of the authors: Geraldine Ryan, Samantha Tonge, and Tina K Burton are well-known short story writers with their work regularly appearing in UK magazines.

The stories span from childhood memories of the 1950s to the present day and there are a range of contemporary themes represented in the stories, but particularly child-parent relationships, peer pressures, and the confusion of interpreting and negotiating the adult world.

Whilst a significant number of stories recall loving and warm relationships between the main characters, particularly at Christmas, the authors are not afraid to tackle the more difficult aspects of growing-up including loss and bereavement, the emotional trauma of bereavement, bullying, negligent parenting, and social class difficulties among peers.

The anthology, although self-published, is professionally edited and no obvious grammatical, typographical, or formatting problems were apparent. The writer and broadcaster, Gloria Hunniford, has written a foreword to the book.

All the stories are clear and unambiguous in their structure, characterisations and plot; there are no head-scratching “what’s all this about?” moments for readers. There were some unexpected twist endings, particularly ‘Fish Supper‘.

Overall, the stories will surprise, charm, and perhaps even shock on occasions, as well as offering readers the satisfaction of supporting a worthwhile UK charity that celebrated its 25th anniversary in 2013.