The Ghost and Mrs Muir

Home » All entertainment » The Ghost and Mrs Muir

The Ghost and Mrs Muir: Movie 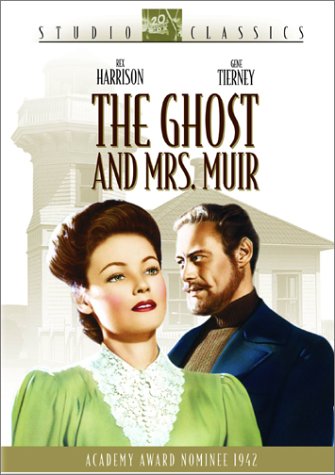 The Ghost and Mrs. Muir

This is the most lovely film. It’s a love story, a weepie, a ghost story and a comedy all in one. Released in 1945, it has all the charm and drama of the Hollywood era.

It’s set in the early 1900s and Lucy Moore has recently been widowed. Determined to start  new life away from her in-laws, she and her small daughter move to a remote rented house near the sea.

She’s been warned that the property is haunted but nevertheless settles down with her little girl, her maid and the family dog. Everything seems very pleasant indeed and the good English sea air will be good for their health and wellbeing.

She discovers a portrait of the man who previously owned the house, the man who supposedly haunts it. He is a commanding looking, bearded sea captain.

However, it transpires that the house really is haunted by him and Lucy and  Captain Gregg get to know each other – as well as a flesh and blood woman and a wraith can, anyway.

They are terribly dissimilar – it reminds me a little of the pairing of Anna and the King of Siam. Despite this, they settle into an easy companionship. Daniel promises Lucy that he will appear only to her – Lucy tells him that her little daughter is too young for ghosts.

But there is trouble ahead

Lucy learns  that due to bad investments, the income that she had received from her late husband’s legacy is gone.

She can no longer afford to rent her home. She will have to return to London to live with her in-laws … and leave Captain Gregg.

Here’s the trailer to whet your appetite.

The captain comes to the rescue. He has a plan. He devises a way in which Lucy can make some money and continue to live in the house. But there is more trouble afoot. The plan goes well but but it means that Lucy has to go to London on business and there she meets another man – a real flesh and blood one.

The success of the plan means that she is able to buy the house but the man she met is still pursuing her amorously. It seems that she will choose a real man rather than the spirit she has come to know. Or will she?

Daniel knows that she is torn and he wants the best for her so once again, has a solution – a rather drastic one.

I’m not going to tell you what happens in the interim – I don’t want to spoil the film for you if you haven’t see it – but near the end of the film, Lucy is an old woman. How has life treated her?

One word of warning: The film gets rave revues at Amazon but try your best to ignore them.  It’s really better if you don’t know how the plot unfolds.