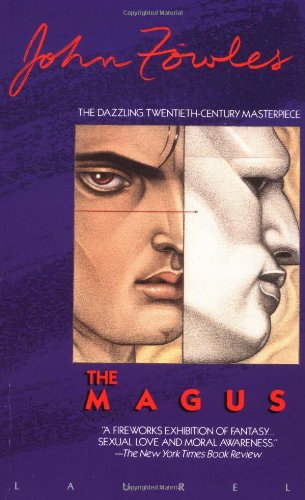 The Magus is one of my desert island books -one I can read again and again.I’ve probably read it half a dozen times – at least. My reading of this book has spanned many years.

It’s a book that has been largely misunderstood, in my opinion.

. I’d truly recommend that you don’t read them if you want to get the maximum enjoyment from this fabulous book. (The Wikipedia page about the book and the dreadful film made in 1968 are just as bad).

There seems to be a tendency amongst younger (or first-time) readers to try to find the ‘meaning’ behind this book. I think I was the same when I first read it. What does it mean? Where is the truth? What is the author telling us?

I strongly suspect that the author isn’t trying to tell us anything. Deep meanings are not to be found in this book. I doubt you’ll suddenly have a revelation about the meaning of life or the truth about reality.(Although please let me know if you do).

When you stop looking for the meaning and simply accept what you read, the book is more pleasurable and more enjoyable by far.

In fact, this is one of the messages in the book, if indeed there are any – simply accept. Looking for hidden meaning in a book about the fragility of reality, about illusion and about the concept that delving too far is rarely positive; it is certainly a strange anomaly.

Indeed, the author revised the book about ten years after its initial publication. In the revised version he explains that:

Novels, even much more lucidly and controlled ones than this, are not like crossword puzzles with one unique set of correct answers behind the clues – (Dear Mr Fowles,please explain the real significance of…)  an analogy  I sometimes despair of ever extirpating from the contemporary student mind. If The Magus has any ‘real significance’ it is no more that that of the Rorschach test in psychology. Its meaning is whatever reaction it provokes in the reader, and so fr as I am concerned there is no given ‘right’ reaction’.

Now we have that out of the way, what can you expect to find in The Magus?

John Fowles began writing the book in the early nineteen fifties and it is set in 1952. It concerns a rather selfish and self centred young man, Nicholas. After being educated at a public school (that means private school in the UK) and doing his obligatory national service, he studied at Oxford. When the book begins, post-university, he is rather aimless and doesn’t know how to proceed in life.

Bored and intellectually pretentious, he applies to teach in schools abroad. He accepts a post teaching at a boys’ school on a remote Greek island and before his is sent abroad, starts an affair with a young Australian woman. Of course, the fifties being the fifties and Nicholas being a self-centred young man, the relationship can be turbulent.

But Alison becomes far from his thoughts when he is on the island and meets an extremely rich older man, a Greek names Conchis, who has a home on an isolated part of the island where he spends his summers. It would be wrong to say that they become friends but Nicholas is invited to stay at Conchis’ home for weekends.

A master raconteur, Conchis tells Nicholas about his eventful life.  Not only this, he illustrates them with intrigue – with a series of visual masques – miniature scenes of his stories that start innocently (but mysteriously) but then become more and more serious and threatening. Nicholas’ first experience of this is when Conchis tells him about his first love – his English fianceé, Lily. She died, he explains. But on a subsequent evening, Conchis tells him that they have a guest and there is Lily – a young Englishwoman dressed in Edwardian clothing and speaking and behaving just as a young lady from that era would. Nicholas won’t believe that she is a ghost. What is the truth?

Every time Conchis tells stories from his past the characters manifest themselves. What seems to be the harmless pastime of a rich older man with memories eventually becomes deadly serious – as the plot twists and turns and twists again.

I cannot explain further without ruining your enjoyment of this incredible novel. It’s unusual for a review to reveal the final page of a book but I feel that in this case, it will only make you more intrigued about the book itself.  The last words are a phrase in Latin. Translated, they mean: