The Reason Behind “The Question”

Home » All books » The Reason Behind “The Question”

The Question, by R. Breuer Stearns

If you could ask one question, what would it be?  Would you have one ready, even as you read this or would you have to carefully consider before answering?

That is one of the paths R. Breuer Stearns takes in his debut novel released October 13th, 2015.  A weighty beginning, don’t you think?

When I first read about this book I assumed it was non-fiction. The subject matter seemed like it would be a philosophical discussion. When I saw it was done fictionally it increased my curiosity. So it was a pleasure when Mr. Stearn shared how he came to write it.

Mr. Stearns and The Question are currently on a virtual book tour with iRead Book Tours, from December 1st through December 31st, 2015.  He will be making stops at a variety of sites with articles and interviews. You can see his full schedule here.  Check it out. It’s a fascinating way to learn more about the author and his book.

The Reason Behind The Question

Topic: How did you come to write a work like this with such a unique premise, especially when placed in fiction?

THE QUESTION is a thriller, a fantasy . . . captivating fiction because it could be true. Many readers wish it was true. And, many readers believe it is true. Why? Is it the promise of Science? The hopeful optimism of Faith? Or, the combination of both, melded in our minds to give us answers, definitive answers, to universal questions? We crave these answers. You do. I do. Yes, we all dearly want the answers to the questions that haunt us in the dark.

I wrote THE QUESTION because I believe that all of us . . . regardless of religion, nationality, gender, economic condition . . . share a common curiosity about ourselves, our beginnings, and our ends. We crave a sense of order, an underlying rationale for our existence, and an explanation for mysteries so large that we can barely fathom what questions to ask. You are right: the premise of this book is big. But, the premise is not at all unique . . . all of us share the wish to know the truth.

Book Description for The Question:

THE QUESTION invites readers to consider this premise:

If you could have the answer to one question, and only one question, what would you ask… and who would try to stop you from asking it?

To what extremes would they go?

THE QUESTION is an adventure story . . . fiction that you may wish, may believe, may know, is true. The narrative occurs in the present, with scenes in California, Washington, D.C., Paris, Shanghai, New York, and Afghanistan.

The story is aimed at high-school and older readers and contains some graphic violence and occasional sexual allusions. The plot is action-oriented with an element of scientific fantasy, similar to Jack Finney’s “Time and Again.” The prose is crisply written, professionally edited, and organized into movie-scene chapters. 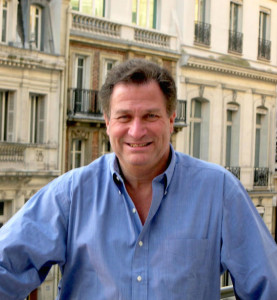 R. Breuer Stearns is an investor and author.

Mr. Stearns graduated from Phillips Academy, Andover (1970), Harvard University (AB, 1974), University of Chicago (MBA, 1977), and DePaul University College of Law (JD, 1979). He rapidly ascended on Wall Street in the 1980’s, serving as Managing Director, Mergers & Acquisitions at Lehman Brothers and Head of Investment Banking (North America) at UBS Securities. While living in New York, he founded “Terrific Teachers, Inc.,” a foundation dedicated to identifying and rewarding the best of the best of the city’s public high school teachers.

Shortly after the fall of the Berlin Wall, Mr. Stearns launched a private investment bank in the former Soviet Union. He spent the early 1990’s seeking to marry emerging science, primarily emanating from Russia’s Defense sector, with Western capital. During this period, Mr. Stearns made a small fortune, albeit from a larger one. The venture provided a remarkable lesson in hubris, a tremendous reservoir of internal strength, and first-hand source material for Mr. Stearns’ first book, Winning Smart After Losing Big (Encounter Books, Beijing University Press).

Mr. Stearns is a Founder of VestaPoint Capital LLC, a family of investment funds focused on real estate development. He lives in Arizona with his wife, two dogs, two cats, and a horse. He travels extensively and is intensely curious.