Home » All books » The Water Room, a Fine Mystery Novel

A mystery, a thriller, an education, a comedy – all in Christopher Fowler’s The Water Room. 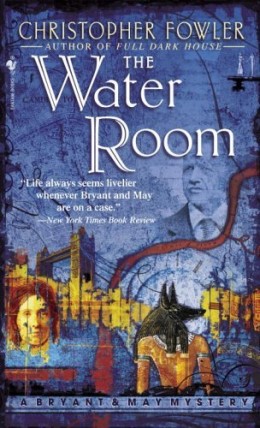 Yes, all in one book we have all these ingredients and more. Comedy, lots of action and a superb and unfathomable mystery.

There’s no doubt that this is a quirky book, featuring as it does two detectives who are in their eighties (yep) and who work for a secretive branch of the London Police Force called the Peculiar Crimes Unit in London. That alone piqued my interest. I’m sure that you’re the same.

They are called into solve crimes that are beyond the capabilities of the regular police force. Weird crimes. Decidedly strange ones,

Arthur Bryant, one of the partners, is certainly eccentric. And he’s definitely somewhat bizarre. Certainly he’s an original,that’s for sure.

His partner, John May, seems to be much more conventional but has his own idiosyncrasies and peculiarities. Oh yes, without a doubt. Together they make an astonishing investigative team. They have been solving crimes together for over fifty years – strange ones that no other police force can handle. This has created a definite bond between them but also a rather strange reputation for the pair.

The Water Room begins when Bryant is intrigued by the death of an old lady. She is a recluse, but was dressed in outdoor clothing. She was found sitting in a chair, fully clothed, in her dry basement.

The recluse was dressed for leaving her home – something she rarely did. She was fully clothed and was discovered in a quite ordinary position.

And yet she had drowned

Have you read any of my other book reviews? If so, you’ll know that I like a novel with a twist in the tale. And I also like to solve the crime before the author reveals all. I had no chance at all with this one. Despite all the facts being laid before me, the conclusion of this book was a total surprise.

But all the facts are there

Don’t imagine that anything is a red herring – it isn’t. They are interspersed within the comedy – I mean, two detectives in their eighties with arthritis, bad backs and false teeth? (‘Have we got any biscuits, Janice? Not Hobnobs, they get under my plate.’) Bryant has never got used to using his cellphone, his driving is appalling and has the most bizarre contacts and friends.

In this book they are in a new office as their previous one had been blown up. They have an office cat named Crippen (‘Because we had that ginger tom named Lucan who disappeared after killing a bird’.) Their sidekick is a glamorous middle aged police woman who they both adore (‘Not just because you remind us of Ava Gardner or because you make a proper cabbies’ mug of tea but because…’)

The Water Room on Amazon

As we travel through the book

We meet dotty academics, spiritualists, white witches, shady property developers and local nutcases and learn about Egyptian mythology, London’s forgotten underground rivers and the plight of economic migrants – all wrapped up in a delicious murder mystery.

This is just SO very good.

These are too good to miss also.

Strictly speaking, it’s a good idea to read this book before The Water Room as it pre-dates it.

It starts when The Peculiar Crimes Unit’s offices are blown up, seemingly with Arthur Bryant too. It travels back in time to revisit the time the pair first met and the astonishingly bizarre case that they solved during the Second World War.

I love this book.

This should be on your list too. It’s a perfect example of a ‘locked door’ mystery.

See the video below in which the author is reading an extract. And once you’ve enjoyed these three, you’ll be pleased to know that there are plenty more.

There’s a whole series of Bryant and May novels to enjoy.

The works by this author are simply astonishing. Once you’ve read one, I promise that you’ll be hooked. You’ll want to read more. And you won’t be disappointed by any of them.

Every one is a total delight.