A Taste Of Ukraine

Home » Featured » A Taste Of Ukraine

Ukraine. It’s not for everyone!

But if you’re anything like me, you’ll see that as part of its appeal. I should clarify, I guess, that I am biased… Ukraine stole my heart back in 2007. I have been returning ever since. Two or even three times a year is not unusual for me. I even lived there for 12 months in 2009. And these days, I am gearing my life towards the day that I can move to Ukraine permanently.

So what’s the attraction? And isn’t it dangerous, there’s a war going on, isn’t there?

It is true that since 2014 Ukrainians and Russians have been fighting one another and several thousand people have lost their lives. The reasons behind the conflict are perhaps too complex to go into here. What probably should be noted though, is this:

As Ukraine is the largest country in Europe – four times larger than England, for example – it is entirely possible to spend two weeks travelling around from one city to the next and never know there’s a war.

Although Ukraine shows up on hardly any Westerner’s radar when it comes to trips abroad, ironically, it is still widely considered to be one of the most beautiful countries in all of Europe, providing you know where to go! Its most known cities are Kiev (capital), Lviv, Odessa and Yalta. I suppose Chernobyl will also ring a bell – the abandoned city in northern Ukraine that was the location of that nuclear power plant catastrophe in 1986. Both Odessa and Yalta are hotspots for Ukrainians and Russians in the summer months due to their close proximity to the Black Sea (it’s not really black, it can just appear that way under certain conditions – actually, it’s beautiful). Westerners and some other nationalities can be found in Odessa and Yalta during summer, but in comparison to other European holiday resorts, their numbers are minuscule.

By the way, Yalta, during the time when Ukraine was under the control of the Soviet Union, was the chosen city to host a meeting of great war importance between Joseph Stalin (Soviet Union leader), Franklin Roosevelt (American president) and Winston Churchill (British prime-minister) in February of 1945. It is known as the Yalta Conference. 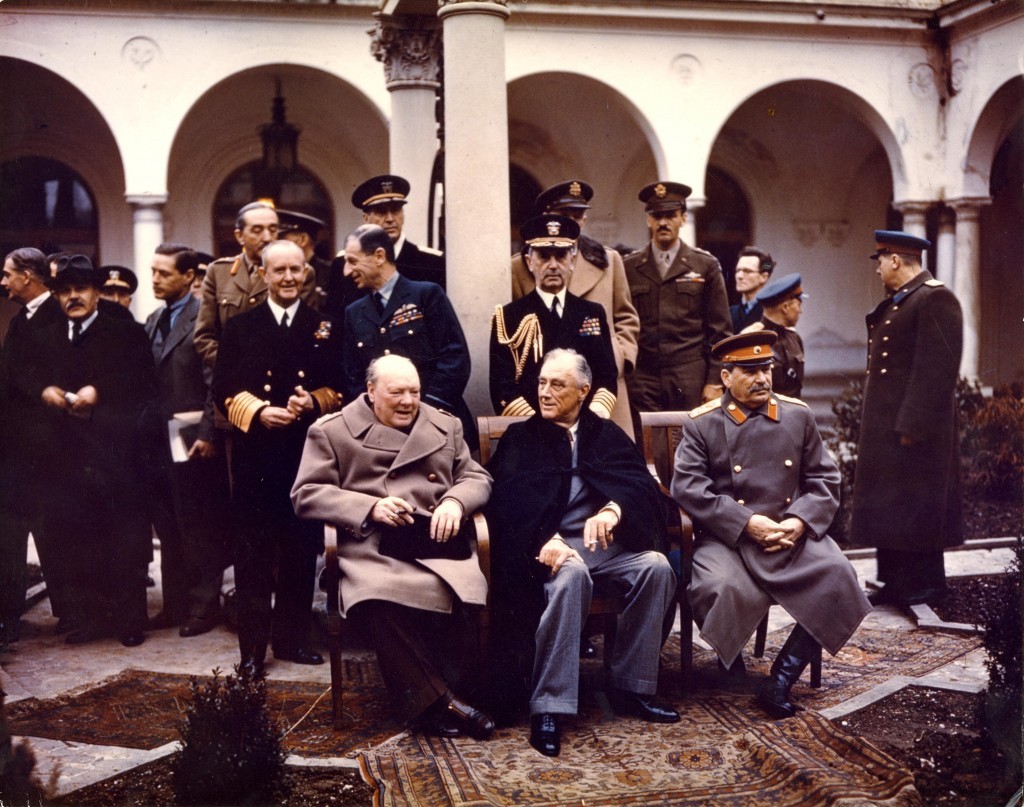 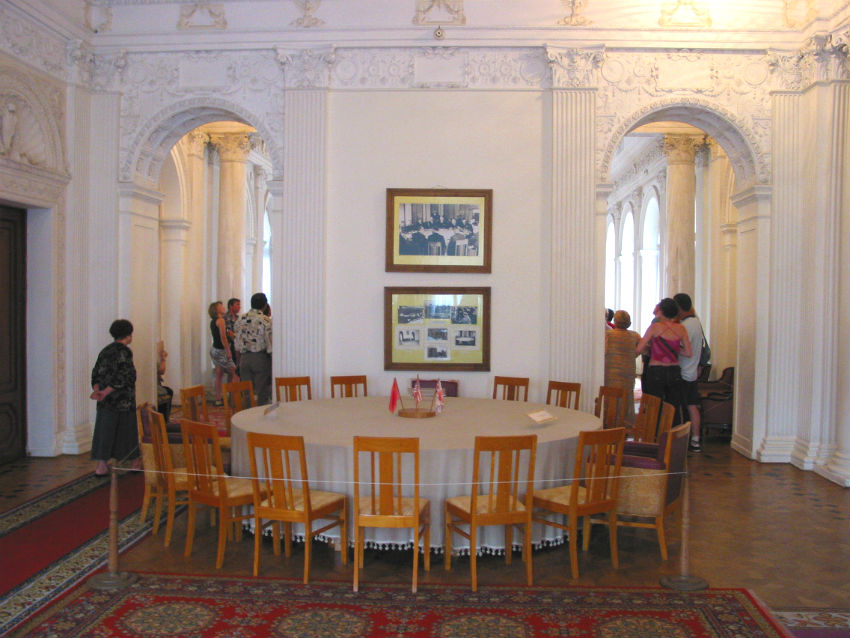 It is said that to make a friend of a Ukrainian is to make a friend for life. I can definitely testify to the efforts Ukrainians will put into a friendship, be it with a Westerner or one of their own. And to be invited to their home – almost always a Soviet era flat in which entire families live including the grandparents – is a real treat. As a Westerner (if that’s what you are) you can expect to be of high interest to every family member. The older people that cannot speak any words of English will use other members of the family as translators so as to communicate with you. I have been at homes where neighbours suddenly appeared in the already full-up room, having been sent a text and invited to “meet the Englishman that has blessed our home”. It’s happened a couple of times.

Be prepared to consume a lot of food and much alcohol (vodka, beer, wine) in a Ukrainian home! During a meal, which the women of the home will have spent hours, if not the whole day, preparing, Ukrainians will toast something of importance every 10 minutes or so, it is considered impolite not to join in. Although I have done so with sips of coffee before and didn’t get in trouble. At least one of the toasts will be for you, and you may be egged to say a few words. Just stand up and thank the household (and your good friend) for having you there and preparing such wonderful food etc, etc. You may even receive a round of applause.

Shoes must come off in the home.

Ukrainians have little tolerance for food that isn’t “natural”. It is a word they use a lot when speaking about food. And it sounds similar to the English word, except the ‘a’ is pronounced like ‘eh’ and the ‘r’ is rolled. Try it, and see how you do. N-eh-trool. But you didn’t roll the ‘r’. Try again.

Borshch is the national dish – a tasty vegetable soup. I’ve had lots of it over the years. Each person that prepares it wants to make theirs “the best in Ukraine”, so be ready with your compliment. And make sure your bowl is empty or you’ll cause offence!

Beef is eaten but it’s chicken and fish that’s preferred. I have heard that rabbit is also eaten but I have yet to see that. The chickens and fish are mostly bought from the market and were alive only hours prior to purchase. Supermarkets are not plentiful in Ukraine, because they play second fiddle to markets, but those that are around often have tanks full of live fish. You select the one you want and they’ll scoop it out, knock it on the head and wrap it in newspaper for you. Stews and casseroles are tasty.

All types of vegetables are present in Ukraine and many are picked the day they are eaten. Babushkas (old women) grow a limited range of vegetables (fruit too) in their gardens out in the villages then get a bus into town and sell them beside a road. For a wider range of fruit and veg the market is the place.

Ukrainian salads are not my favourite – I prefer the way we do them here I England. It’s because they tip oil into theirs. And also their salads are everything in one bowl, rather than having things laid out and on a plate, as we have it: potatoes on this part of the plate, tomatoes next to them on that part, lettuce next to them, etc. Eggs are also bought mostly from the market or a babushka that keeps chickens. Bread (khalib and bat-orn) is consumed everyday, just like everywhere else. But theirs is without any kind of preservatives so lasts a day, two if you can bear it hard, which I cannot. And most Ukrainians prefer their bread without any butter or spread. I don’t like that either.

Beware the milk in Ukraine! Because of their almost obsession to eat only natural products, milk straight from the cow is largely used. This is illegal in the European Union, which Ukraine isn’t a member of. I tried it only once and was almost sick, but maybe that’s just me. Oh, and you mustn’t ever, ever, ever drink water from a tap, ever! Buy bottled, always!

I also don’t ever bother with their tea (chai). It’s N-eh-trool, they always say, and what I drink here (teabags) according to them, is not tea. Theirs have twigs and leaves and stinging nettles and all sorts of other debris in them floating around in the cup. It’s not for me. 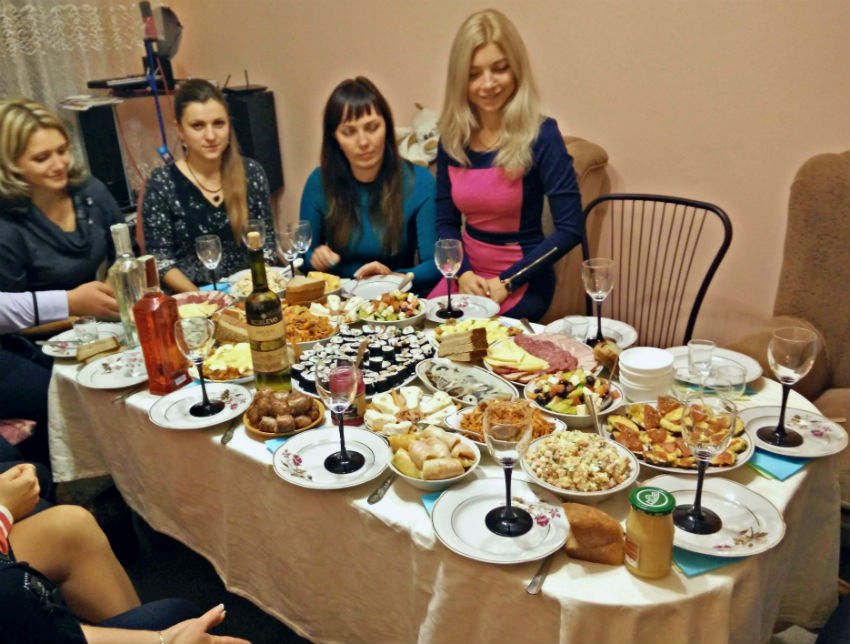 Me enjoying being the centre of attention at a friend’s home in Ukraine. Image credit, me. 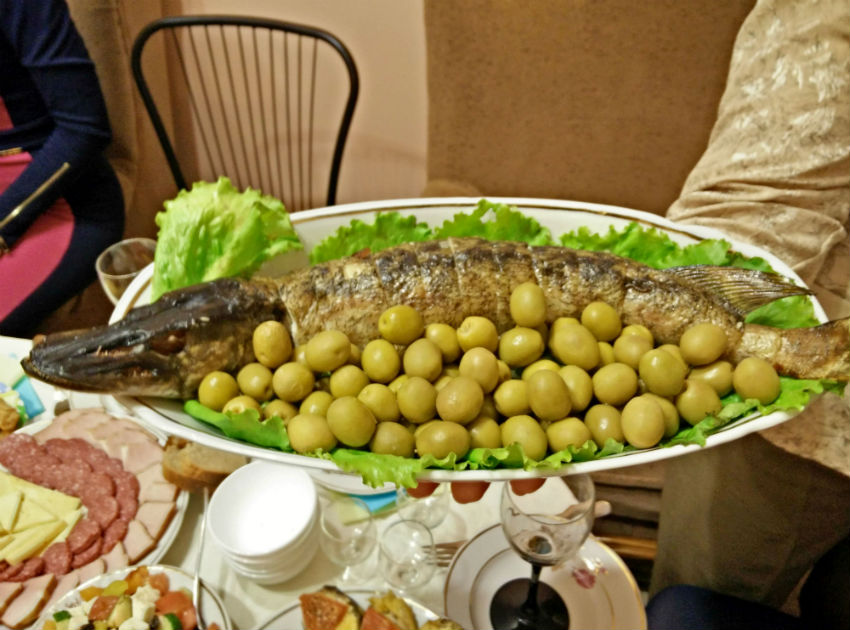 I will never eat all of him. Image credit, me.

The exchange rate – thanks to Putin and his invasion – has never been more favourable to Westerners. Currently it is 35 grivna to one pound, 25 to one euro and 23 to one dollar. Using cigarettes to illustrate what that means… a box of 20 Marlboro here in the UK is around £8.50. In Ukraine they are around 12 grivna. So that’s £0.35 for a packet of Marlboro! Almost every single thing over there is dirt cheap for us. For them it is quite another matter – the average wage is about £60, a month!

Crime, despite the widespread poverty, is determined to be at a normal level for a country of Ukraine’s size and population (46 million). Non violent street crime – pickpocketing mostly – is the biggest menace to foreigners. I myself have not yet been a victim of any type of crime in eight years, and that includes the 12 months of living there. Actually, I feel safer there than I do here. I have ambled about on my own at 12.30 am in the centre of Kiev and felt perfectly safe. To do that in the centre of London would be bordering on suicide!

The weather I can best describe as similar to Britain’s but you just need to add about 10 degrees in the summer and minus 10 degrees during winter. If there’s no snow in Britain it’s likely there’s none in Ukraine, maybe a little in the Carpathian Mountains region. If there’s heavy snow in Britain then it’ll also be across Ukraine, and likely heavier. Ukraine does have its extreme year every once in a while though, and I have experienced two of them, conveniently a summer and a winter… 44 degrees Celsius in the summer of 2007 – minus 28 degrees Celsius in February 2010. They’re extreme, for an Englishman. 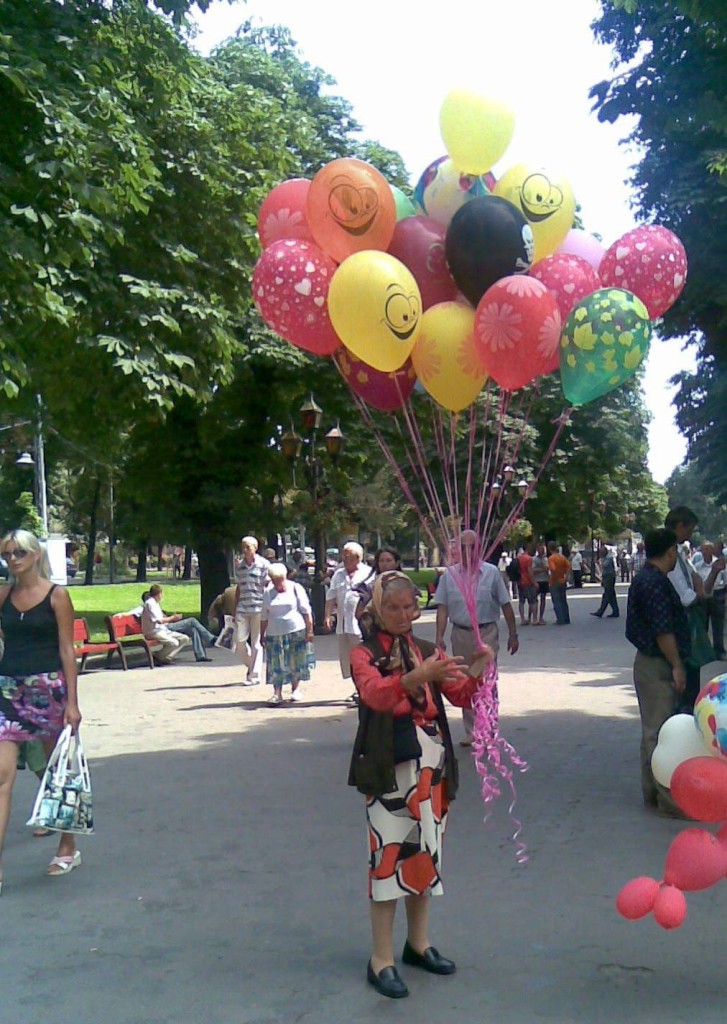 So, there you have it! A few paragraphs on my beloved Ukraine. I hope you found something interesting within them. I am by no means an expert on all things Ukrainian, but I’ve picked up a few things and continue to. So, if you have any questions feel free to ask them in the comment box, below. Or even just to let me know what you think.

If you’d like to read about my crazy first visit, you can do that here.

If you’re heart is opening to Ukraine and you just have to learn more, then I have selected two books that I think are for you. Both available on Amazon.

The first is this hilariously funny cookbook that is receiving rave reviews right now. 190 recipes covering just about every Ukrainian dish. All of them you can cook at home. Be warned, though, this book isn’t presented in the normal style of a recipe book! Click the cover and read a preview, and the gushing reviews from those that are buying it. 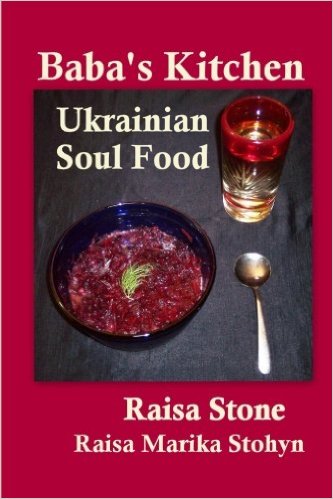 The second book I think you might like is this one. Click the cover to look inside and you will see why it is a must-read for anyone interested in Ukraine and its people. 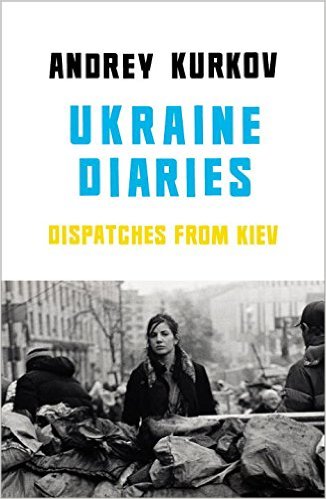 Happy Ukrainian cooking, reading and, who knows, maybe I will see you over there one day!