What is Food Synergy?

Home » All food » What is Food Synergy? 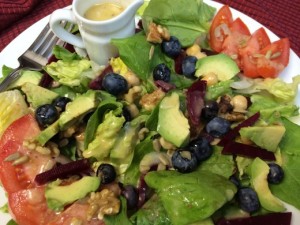 We often hear that many foods are best combined to provide better nutrition. Probably the most common is beans and rice.  Served together they form a complete amino acid, especially important in vegetarian diets.

That is what is called ‘food synergy.’ Foods that go together for health benefits.  The vitamins and minerals each contains work best with another food to maximize the benefits.  The pairing of specific foods can play an important part in risk reduction for some diseases.

As with so many of the food suggestions, they are easy to include, and foolish to avoid.  If any one or all of them could offer protection from some cancers, from heart disease, or from Alzheimer’s disease, shouldn’t we all be eating them?

They are tasty, nutritious, colorful, and adaptable, so there is really no excuse.

Rice and beans are not the only ones.  Have you heard of some of these?

One of the most recent I’ve learned about is combining turmeric with black pepper.  Turmeric is considered nearly a wonder spice for all the ways it benefits and even heals the body.  It’s an anti-oxidant, an anti-bacterial, and an anti-inflammatory, just to name a few.  I suppose it is no surprise that it is called a ‘healing spice.’  The main ingredient that makes it so is the curcumin contained in turmeric.

It even known to speed up the metabolism.  Which is a problem for the spice itself.  It tends to metabolize before the body can fully absorb it.  Which brings us to black pepper.  Using pepper when you use turmeric increases its availability within your system by 1000 times. Yes, that is 1000 times, all due to the ‘piperine’ that is part of the pepper.

That makes it easy, doesn’t it?  Anytime you are cooking with turmeric, add black pepper to maximize the nutrients you take in.  The two go together well anyway.

By the way, the piperine in pepper also benefits green tea.  Not sure you would want to drink it that way though, so some suggest you use the combination as a marinade.

This was one of my Italian husband’s favorite appetizers, though I doubt he realized the health benefits it included.  Easy too.  Slice or chunk fresh tomatoes and sprinkle with olive oil.  We always add finely diced garlic to the olive oil first for a rich flavor.

Turns out it is an excellent combination.  The olive oil increases the lycopene in the tomatoes, which increases the anti oxidants.  Since olive oil is already good for you, it makes for a super nutritious appetizer or snack.

I wonder if the previous generations in my husband’s family knew that all along?

Avocado can also work in the same way, increasing the lycopene in tomatoes and other veggies as well.  Which is why it is recommended in salad next.

Salad Greens with Avocado or Nuts

From the research I’ve done on preventing Alzheimer’s disease, greens, avocado, and nuts are familiar super brain foods to me.  Why is it so good for you?

As we saw above,the olive oil brings out the good in tomatoes, thus increasing anti-oxidants.  So it works with carrots and red peppers for lycopene and in salad greens with the lutein contained.  Besides increasing the anti-oxidants, the veggies are better absorbed. The fat content in olive oil, avocado, and nuts actually slows the digestion, giving the body longer to get the most from what you eat.

The increase in anti-oxidants helps the body destroy those risky free radicals floating around the body.  Thus it can help reduce the risk of disease and illness.  Worthwhile, don’t you agree?

Similar to greens and tomatoes, Brussel Sprouts need some help for the best absorption.  In their case it is because of the vitamin K content.  K is a fat soluble vitamin, which means it works best when cooked with some fat.  Olive oil is a heart healthy fat, so it is the best choice to combine to get the most nutrition from the sprouts.  Good for bones and heart at the same time. 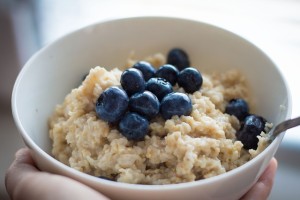 Another favorite of mine, the two seem to belong together for breakfast.  Lucky break that they are healthier together too!

Both are top food for a healthy brain and body to begin with, but it turns out that the vitamin C contained in the blueberries increases the effects of the phytochemicals in oatmeal (and other whole grains).  Those phytochemical fight inflammation.  Other ingredients help prevent the free radical effect on LDL cholesterol.

Berries are considered important in fighting cancers, whole grains in lowering the risk of heart disease. Combined they just might have superpowers.

While I’ve heard beans and rice, I hadn’t heard that specifically red beans combined with brown rice may be the best.  Red beans contain excellent percentages of potassium, magnesium, fiber, vitamin B12, and protein.  Those nutrients combine to guard against colon cancer, heart disease, high cholesterol and high blood sugar.

Rice and beans make a complete protein when between the two they contain all nine amino acids that are not produced in our bodies.  Brown rice contains both the bran and the germ,  is high in both fiber and magnesium,  and pairs with kidney beans to do just that.  With only one gram of fat, the two combined offer eighteen grams of both fiber and protein.  Satisfying and so nutritious.

Speaking of beans,  onion and garlic are both good to combine with beans as well. Their presence helps the body absorb more of the zinc and iron in the beans.  So when you are making rice and beans, include garlic and onion, delicious anyway, for further benefit.

Raw peppers are also great choices to help with iron absorption in beans. Also tasty in  nearly all recipes for beans and rice.

What is so great about green tea?  Everyone is recommending it these days. Once again, there are remarkable benefits from a simple cup of tea.  Those benefits increase significantly when combined with lemon or citrus.

In tea, the anti-oxidants are found in ‘catechins.” Catechin’s help lower the risk of cancer and heart disease.  Good, so far, right?  We understand anti-oxidants by now and their benefit.

Recent studies have shown that ascorbic acid found in citrus enables the catechins to increase absorption in the blood.  The longer they stay in the blood without metabolizing, the more the body gains in nutrients.

Speaking of catechins, you might be happy to know they are also found in dark chocolate substantially more than in milk chocolate)! For many of us that will sound much better than green tea.  The antioxidants in catechins help stop hardening of the arteries.

Apples, in the skin especially, contain quercetin, an anti-inflammatory flavonoid.  When combined, the two help dissolve blood clots.  This might become a favorite dessert item for a healthy heart.

Last, but far from least is another unexpected combination…

Fish with a Glass of Wine

Studies has shown that a small glass of wine with a fish containing omega 3 fats, (such as a favorite brain food, salmon) increased the amount of the omega 3’s in the blood.   Probably because of the ‘resveratrol’ contained in wine.  It’s already known that the anti-oxidants in resveratrol helps fight heart disease, Alzheimers, and strokes.  Good to know it may increase the body’s omega 3 absorption as well.

Red always seems to be the highest recommendation, but white is becoming acceptable too for health benefits.  Do remember though, we are talking a glass or perhaps two. 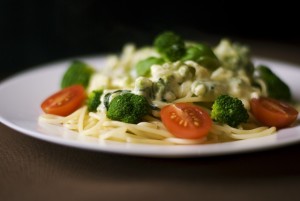 Some are just naturals together.  Like garlic and salmon.  Both work to help cholesterol, so combined they may do an even better job.

Similarly, broccoli with tomatoes shows positive increases when combined.  They each are suggested for cancer prevention (especially prostate cancer), but they go about it in different ways.  So by combing them, they work even better on containing and reducing tumors.

Another is a banana with milk or yogurt.  Milk and yogurt are great sources of calcium.  Bananas are  high in potassium and helps with calcium absorption.  The two together offer a great path to stronger bones.

All in all, it is still another lesson for us to eat a variety of foods, plenty of vegetables, and combine them with other know healthy foods.  Nothing listed here is hard to find.  All the foods here can be fixed easily without very much time and effort.  There is no reason not to include them on your grocery list and in your meal planning.

Who knows how much benefit they may have.  The sooner you start the better the effects.