What might Britain have been like under Nazis rule if they had surrendered to Germany in 1942? This is the central point of the thriller, ‘Dominion’ set in the early 1950s. 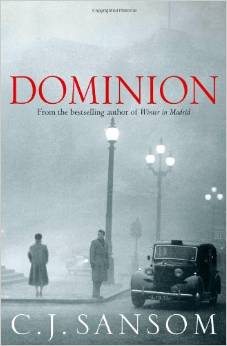 The author, C.J. Sansom, author of the ‘Shardlake’ Medieval detective series, imagines a post-war nation divided against itself, with many accepting or turning blind eyes to the excesses of Nazi rule and regime, including anti-semitic policies and the torture and execution of opposition members.

But there is a growing resistance movement headed by Winston Churchill, who operates in secret exile from within England. Germany is dominant in Europe, Hitler still alive, but rumoured to be seriously ill, so the German power base is starting to divide. The war against Russia still rages in the east, with millions dead, and Germany wants to acquire an atom bomb to finish the job and gain complete control of Europe and Russia.

Against this setting the plot centres on the attempts of members of the British Resistance to rescue Frank Muncaster, a man with knowledge of atomic weapon development, from the Germans and smuggle him to America. Leading this rescue is David Fitzgerald, a Civil Servant operating covertly from within the Government Dominions Office in London.

Fitzgerald and his associates are pursued by a Gestapo Officer, Gunther Hoth, assisted by William Syme, a British Special Branch officer, and the tension is cranked to an almost unreadable breaking point as Hoth and Syme close in on their prey. The final scenes are exciting – and tragic.

The strength of the novel is in its period detail. Real characters from British political and social history are mentioned and their roles in a post-war Britain, dominated by Fascist policies, are convincingly outlined – and based on their real pre-Second World War sympathies and attitudes. The Fascist sympathiser, Oswald Mosley, for example, is given a key role in the government for the implementation of Hitler’s policies, and the right-wing Lord Beaverbrook made the puppet Prime Minister.

The settings and descriptions of early 1950s England are very convincing. I grew up in this period, and the fogs of London, descriptions of food, clothing, transport and housing all have the ring of authenticity about them. The characters are convincingly drawn, particularly Frank Muncaster, emotionally and physically crippled by his treatment at the hands of bullies at school, and elsewhere.

For me, the interesting feature of the book was in the way that the author presents an authoritarian regime being so readily embraced by a large section of the population. The deportation of the Jews from Britain, for example, is either ignored or welcomed by many. Yet, despite this, a central message emerges that this type of regime cannot stand the test of time and that the quest for democracy, freedom and decency in governance will prevail in the longer term.